Kim Kiung-soo "As the trial unfolds, the truth is approaching" 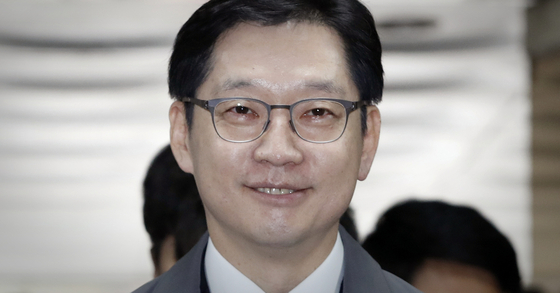 Kim Gieong-su, who is charged with plotting to manipulate the comment, said: "As the trial progresses and the progress of the journalists, the truth is approaching."

Kim said: "I go to court in accordance with legal procedure and I work in good faith," Kim said after the completion of his trial at the 32nd session of the Criminal Reconciliation of the Central District Court in Seoul.

On the day of testimony, Kim said: "There was a demonstration of King Krabe, and Governor Kim nodded." Kim said: "Is there no statement between the witnesses?" "I'm making a confrontational statement with each other (whether it's fake or not), he said," for a long time I've been clear from my position. "

On November 9, 2016, when Kim visited an office in Gyeonggi-Pai, he testified that King Crab demonstrated in front of Kim's governor under the leadership of Drunk King. He said: "Kim Dong-von (drunk king) sought permission to continue the development process, and Kim Sung nodded." During the demonstration, Kim Dong-Von said he left the mobile phone: "Let's go out for a while."

On the other hand, Kim questioned the allegation that the Vu statement was changed during a police investigation and a special investigation. The lawyer said Voo had stated at the beginning of the investigation that he had "made his cell phone after the demonstration had ended" and then changed his mind to "leave the cell phone" and asked, "What is the right memory?"

Voo said: "I spoke as I saw and remember that this statement has changed." "For the first time I left my mobile phone and came back and got it."