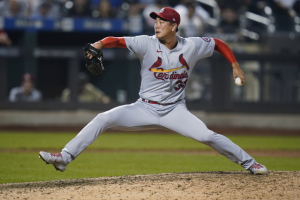 Kim Gwang-hyeon (33, St. Louis Cardinals) appeared in 9 days and took a first step towards the comeback victory with a goalless counterattack.

After receiving baton from starting pitcher Adam Wainwright, who gave up five points in four innings, Kim Kwang-Hyun climbed the mound at the end of the fifth inning, which was the 1-5 lead. It was the first time in nine days since the New York Mets on the 15th.

Kim Kwang-hyeon was hit by Willy Adames at first and first base and gave Christian Yelich a ride to create a full-base crisis himself.

In the hump, Kim Kwang-hyeon caught Eduardo Escobar with a floating ball in the right field and even Luis Urias cooked a third ground ball to finish the entry unmarked.

After catching two exits at the bottom of the sixth inning, Kim Kwang-hyun faced a second risk of yielding a Manny Piña double, but extinguished the lead fire Abisail Garcia with a ground ball.

Kim Kwang-hyun was substituted in the seventh at bat.

St. Louis scored four points with Paul Goldschmidt’s two-run homer in the seventh and balanced him 5-5.

Goldschmidt painted a solo bow in the middle of the month with wedge 8-5 in the ninth.