Seating and staring at the night sky & # 39; Developing astronomical projections 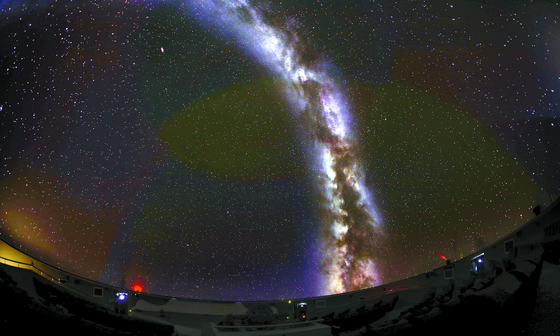 The Gwacheon Museum of Astronomical Projection should be reopened on October 10th. The galaxy runs on a closed dome screen of 25m in diameter. It has four times better resolution than the existing one. [변선구 기자]

From the place where the south sky and mountains meet, something like a cloud goes to the top of the head. It's a dark night sky, not a cloud. Our planet belongs to another litter, the Milky Way. Orion is a typical winter constellation with three stars standing next to each other in the dance floor. At the end of the northern sky, the Big Bear holds a large dipper as a pot. The sky is black and black, and many stars are stuck.

It is the "night sky" of Gwacheon, the province of Gieonggi, which was present in the last 7 days. Of course, you can not see the Milky Way in the suburb of Seoul in the 21st century filled with light pollution, but there are still places where it's possible. This is a planetarium, which shows the constellation of the night sky on the inside of the dome building.

JoongAng Ilbo was reorganized as a high-resolution digital high-resolution projector in the 8K resolution and visited the astronomical projection hall Gvacheon Science Museum, which will operate from October 10th. The Gvacheon Science Museum, the largest in Korea with a dome diameter of 25 meters and an area of ​​981 m², is again shielded with 6 laser projectors with 5000 angstroms. Resolution is four times better than existing buildings. Resolution of astronomical images provided by NASA and the European Space Agency (ESA). Thanks to that, I could see more colorful galaxies and many stars from the night sky that can be seen from the world's space to observe space in Hawaii, Mauna Kea.

"Let the constellation lead to the line." When Park Dae-ioung, who led the project of replacing an astronomical projection tube, was reduced, the stars shining on the head were connected to the line. The shape of the Big Dipper ball is obvious. Then, "Let's show it like a picture," a night sky filled with people and images on animals. The big dipper became the tail of the "Big Bear".

It's not just the night sky on Earth. Observations of NASA and ESA can be used to view Earth and other planets from the Moon or Mars viewpoint, or to travel like a constellation on a spaceship. When asked if he could magnify Saturn, Saturn, with its characteristic edge as if a spaceship was running at a high speed toward Saturn, it was full of snow.

Spherical projection tube with a 360 degree hemisphere display is a great movie cinema. The Gvacheon Science Museum reopens the Astronomical Design Hall and opens up new domes of video and various genre screenings and video events for two months in November and December. In November, five new dome videos will be shown on Saturdays and Sundays. It is based on the latest scientific achievements such as "Ice Vorld" on Earth and the Solar System, and "Robot Ekploration", which shows the mystery of the solar system discovered by a robotic probe. Every Saturday and Sunday we open the "Grand Festival of the Astronomical Project" in December. The 14 latest dome films will be shown on the subject of space, earth, time and dinosaurs.

Dae-young Park said: "Moscow has recently entered a 37-meter long dome projected into the sky." The Gvacheon Science Museum, the largest in Korea, will be among the top 15 in the world. "