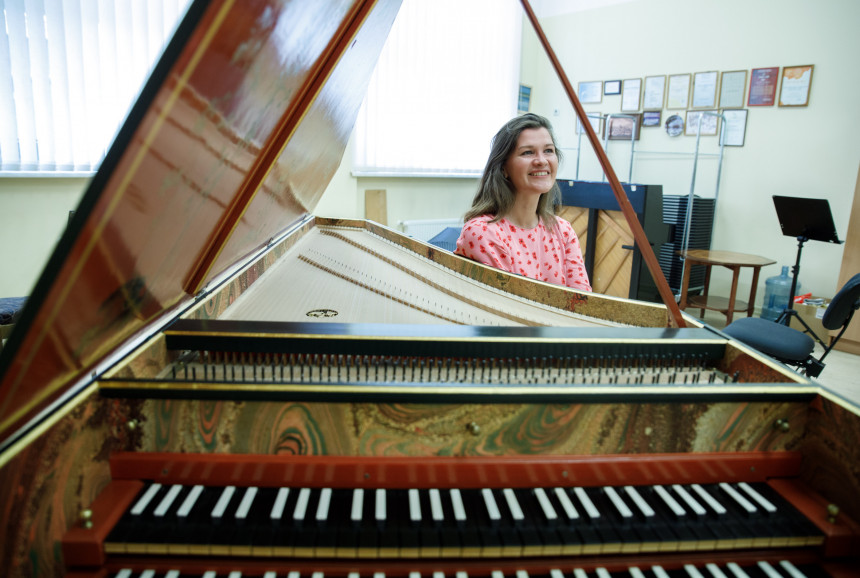 Today, the 25th International Festival of Ancient Music begins with a concert at the Small Guild, which will take place in Riga and Rundale Palace on July 13. Italian baroque masterpieces will debut during the opening ceremony, with several prestigious European music awards, violinist and counter-contemporary Dmitry Sinkovsky, cellist Ilze Grudule and harpsichord Ieva Saliete.

This time the concert program was chosen by Dmitry Xinkovsky and his creative mission was in Venice. The concert will feature masterpieces of this Italian region, which will allow you to see and experience the musical essence of Venice, which has been centenary in the Renaissance and Baroque historical circles of Venice. Apart from the work of well-known and colorful teachers Claudio Monteverdi, Antonio Vivaldi and George Friedrich Hendel, there will be no less vivid examples of other works inspired by Venice. The testimonial of the virtuoso German keyboardist Johann Jakob Froberger and the sophisticated dance suite will coincide with his contemporaries, the famous Austrian violinist Johann Heinrich Schmelcher.

"This year is exactly 20 years since I participated in the Ancient Music Festival," recalls Eve Saliete, and this time remembers that it was also the first major public performance as a harpsichord after postgraduate studies in Europe. Since then, Ieva Saliete has performed regularly at the Early Music Festival: it is a guaranteed opportunity to play ancient music once in Latvia, since the artist is mainly speaking out of Latvia.

In this concert, he will play along with his old stage partner Ilze Gruduli, who resides in Basel and two years ago at the Lucerne Dmitry Xinchovsky festival. He describes the program of concerts in a concise way: "15th-century music; Baroque music in relation to Venice ».

The concerts of the old music festival, which are already very usual, are very well attended, the tickets are completely changed for concerts in Riga and Rundla, and Ieva Saliete explains this persistence of the public: "It's an intimate and personal music, not It is designed for crowds of people. " Although it is a fast and pragmatic time, ancient music attracts the public directly "with personality and honesty, because old music is not made with noise, but with discomfort." Maybe in Latvia too often it does not sound, although in the concerts it starts to sound more and more often because we already have our own old music performers and we hope that they will have more place in the life of concerts in Latvia. Where is the phenomenon of ancient music? The movement of ancient music originated as an alternative way of thinking and playing experimental music, such as organic food, vegetarianism, etc. It has still retained this special primitive spirit. We do not have so many "traditions" in interpretations, we can be very free and courageous in our musical expressions. This music is both academic and non-academic at the same time ».

A marathon for life

His path to harpsichord and ancient music is called Ieva Saliete as unusual. He studied piano at the Acadèmia de la Música, and at that time it was essential that pianists chose additional instruments. You had to choose between organ and harpsichord and, since gold at that time had never directed it, chose the harpsichord. "At the moment, the organ seems to me a wonderful tool, but at that time it did not seem to be the case, and I was scared of the pedals. So I started competing for a harpsichord, although I know clearly: I would never have discovered the old music without this situation. I had to make some effort while enjoying a harpsichord, "recognizes Ieva Saliete. However, the most notable change occurred when Eve left her studies in Freiburg in the early 1990s , where the musical university had a wide array of ancient musical instruments. "I have just seen that there are a lot of harpsichords, hammers, all baroque instruments that can play chamber music, how huge a lot of old music is still It has not been studied and I think it will not be long, "says Ieva Saliete. Although he graduated as a pianist in Freiburg," the choir had already chosen in the direction of ancient instruments. Perhaps also because I had seen I have been playing piano for six years, and it's not surprising that at the age of 22, when I discovered new oceans and unexplored continents, I was distracted. And for me this choice did not seem complicated, it only happened. At the moment, I am more interested in medieval music, where there is still much to discover. "

Eve describes his way in music as very gradual: he sang a lot in his childhood, so that the parents brought it to the group Cucut, but it was difficult to leave regularly Iecava in Riga, so when school began, the girl was sent to a Bauska music school. «I had a wonderful teacher, Ligita Karklins, who is still teaching. In May of this year I accidentally sat down at the Bauska concert, I was very pleased to hear from you, "recognizes Ieva Saliete. After that, the studies continued at the Jelgava Music School and later at the Academy of Music. The path of the musician to Eve is compared to a marathon, but the fact is that every year music schools end up with many musicians, but not all of them eventually associate their lives with the musician's profession. «In the orchestras I find many people and musicians of the highest quality, and I always wonder: why are these musicians? I see that each one of them is a passionate person who loves his instrument and works and does what he can not do. I know of myself: I have nothing more than what I want to do. In fact. It makes me happy I hope you continue. "

She calls life to Latgale, where she is her family, and Europe, where she is mostly a concert, says wonderful. «They are two different worlds with different rhythms. In Europe, including Riga, I have a different dynamics, I run, I play, I work with bright eyes, while in Latgale I have my houses, peace and nature, which each person needs to regenerate. So I had this life. I have a lot of confidence in myself and in life. Love is a huge value, I do not know if there is more value for a wonderful family, and my love is in Latgale, and I also feel like Latgale because my ancestors are in the line of my dad from Latgale . "

Her husband, ceramics and lawyer Andris Ušpeli, Ieva met at Rezekne. "It happened: the harpsichord of Europe arrived at the Rezekne festival and there was a wonderful strong man in the heart that helped bring the harpsichord and also made a walk through Rezekne in an apple garden of Pacelujevka … comes to life, "says Eve. The man never wanted to attract Latgale, to the boilers, to the garden and to the education of children, because Ieva thinks Andris knew well that "only gardeners would be the kind of woman she did not want to have at home I have the freedom to participate in all the projects I want and we always find a way to harmonize everything. "

And planning is sometimes a great job, as three children grow up in the family. "Three little children," emphasizes Eve. "If there is a lot of worry and stress with one, try raising three children, because then you will understand that there are no stress resources, it's just a resource for trust and organization. I live with easily and seriously, but also three children had a great desire, never wanting more concerts and less children. "Everything is in a good balance, the two sides do not conflict." A large family mother is also pleased that the children Children can grow in a natural environment, run barefoot, because "the natural way of life gives strength to life."

When he met his next wife, Eve was sure to sit on the can of ceramics, but the opposite was happening: "man rarely gets wool, but I do not think he's a victim because we all do the What we want to do to life, apparently now is not a topic for him, because there can always be excuses without time. Even children will be older, and I will never be … I already have my own turn – harpsichord.

Nor is it clear whether any of the children will be the successor of the famous Pygmy ceramics, because "the older child is an intellectual reader of books, music is not particularly associated with him and the ceramicist's turn, while in the life of Their daughters will probably be music because they sing and dance. ; while the smallest son is so touching that it is not known if you can join any instrument or bar. There are many popular musical instruments at home, because my husband plays popular music, but two of the three children have dust called potters. Although the continuation of the family tradition is, as it is called, a sacred thing, it will allow each child to choose their path, because Eva is convinced that "everybody is born with a special talent and eager to do Something in this life. "

In addition, you can never know which gene generations of the family will spread. Ieva's father was not a musician, though "in latgale's postwar years, he learned to play piano and accordion for self-learning. The grandfather, on the other hand, was a professor of mathematics and music, who had cut a firewood violin during the Tsar, and still is in the possession of our family. He played a violin, he was a great lover of Beethoven and I have a wonderful collection of notes: Mozart, Beethoven, the works of Chopin … by my grandfather, who I have never known.

Eve, as a participant in the Baroque days of Rezekne, remembers the way from Riga to Rezekne as "impossible for a long time". But now, when we return from concerts to the village of Pocelujevka in the parish of Griškān, near Rēzekne, the same path feels different. "It never seemed long and long … It's my time, I can think and think, and it's also time to change from one rhythm to another, from one Ieva to another …"