Latvia’s forests cover more than 3 million hectares, almost half of which belong to the Latvian state, but the rest to legal and natural persons.

The top 20 largest forest owners together own more than 300,000 forests. has, according to information gathered by Lursoft. The surface of forests belonging to eight of them exceeds 10,000. ha, while the leader of SIA “MYRTILLUS” – even 58.96 thousand. must forest.

Most of the total turnover of the 20 most important companies was formed by a company: JSC “Latvijas valsts meži”. Last year, the proportion of its turnover in the total indicator of the top 20 largest forest owners reached 83.73%.

Latvian-owned companies are a minority among the 20 largest forest owners, according to data collected by Lursoft.

If the companies of the Swedish group “Sodra” are five of the TOP 20, next to them are six more companies whose share capital has been invested by Swedish entrepreneurs. The TOP 20 list includes three companies with direct investment from the Netherlands, as well as one company each owned by Luxembourg and Denmark.

Among the 20 largest forest owners, there are only four companies with local share capital, including one of them, SIA Rīgas meži, which belongs to the municipality of Riga, but the state-owned company AS Latvijas valsts meži occupies the eighth position .

The only privately held local capital company on the market, which is 100% owned by one person, is SIA “Stiga RM”, according to data collected by Lursoft. At the end of August, SIA Stiga RM owned 6.05 thousand forests. ha, which ranks 14th on the list of largest forest owners. Last year, the company owned by Andris Ramolins increased its turnover to 23.92 million. EUR, closing the year with 1.95 million. Profit in euros. Half of the total turnover of SIA “Stiga RM” in 2020 was generated from the sale of products in Latvia. It should be noted that forest management and logging is only one of the main activities of SIA “Stiga RM”. The company is also engaged in the production and sale of birch plywood, as well as the sale of logs. The company notes that in 2020 its total assets have increased, which is mainly related both to the long-term investment revaluation reserve for long-term plantations and to the increase in forest area.

In terms of the amount of forest land owned, the largest local capital company is SIA “Rīgas meži”, shows the information collected by Lursoft. The company owned by the municipality of Riga has 45.80 thousand. has forest, which ranks second among many foreign-owned companies on the list of its largest forest owners.

In 2020, the Forestry Division of SIA “Rīgas meži” regenerated the forest with an area of ​​320.28 ha, planting a total of less than one million seedlings of pine, spruce, birch, black alder and oak. To prepare for the planting of trees next spring, the company has also prepared soil for 463.63 ha. From the second half of 2020, the company has also carried out intensive maintenance of undergrowth in the administrative territory of the city of Riga in a total area of ​​240 ha.

The annual report available for Lursoft shows that last year the turnover of SIA “Rīgas meži” has increased by 8.26%, to 18.21 million. EUR. Most of the company’s revenue, that is, 14.71 million. EUR, generated revenue from surface auctions and timber sales. Last year, SIA “Rīgas meži” also received 2.38 million. Aid received in the amount of EUR. 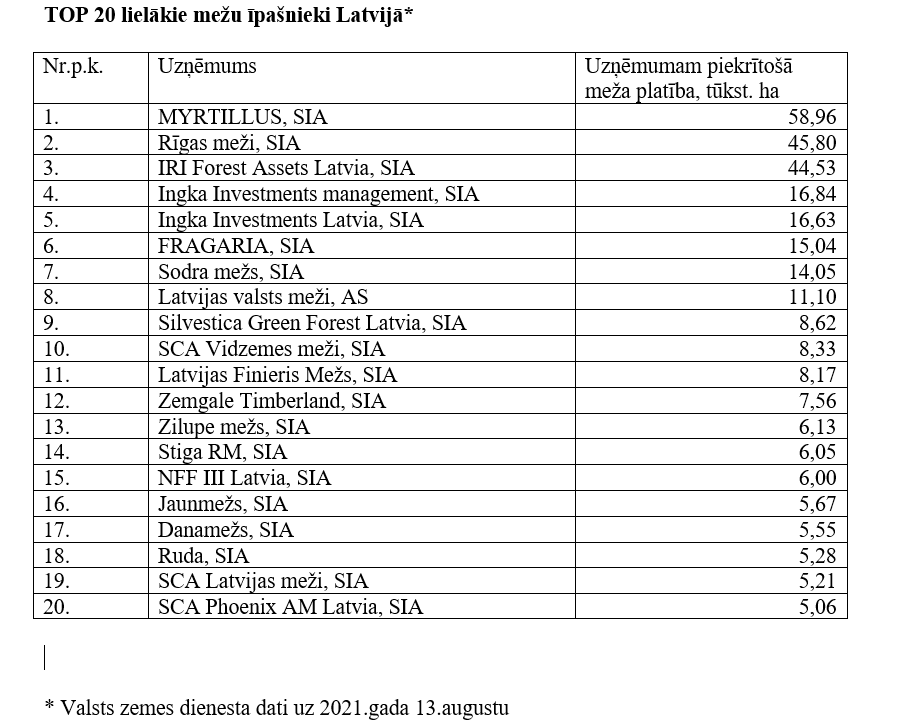 The largest winner of the TOP 20 list of largest forest owners has been JSC “Latvijas valsts meži” throughout the year, whose forest area at the end of August this year amounted to 11.10 thousand. ha. In total, JSC “Latvijas valsts meži” manages and administers 1.62 million. has land of the Republic of Latvia. Last year, the company had a turnover of 349.69 million. EUR, after taxes 62.29 million. Great EUR benefits. Most of the company’s revenue, that is, more than 320 million. Revenue from the sale of round timber assortments was EUR.