After reconciliation … Is there an alliance? 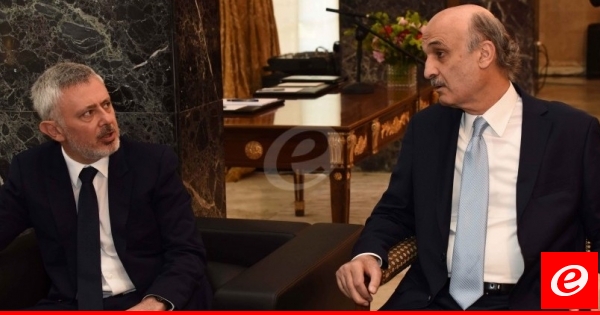 The meeting between Lebanese forces leader Samir Geage and the head of the Al-Mard movement, Sleiman Franjieh, is closer than ever before. It is connected with the completion of some very small logistics details, in addition to providing the best security conditions. It is possible to protect both faces. What information about the upcoming meeting?

First: the meeting will be held under the auspices of Bkirki and its direct patronage and at the highest levels, for a number of reasons, including the approval of this reconciliation of the religious dimension and the desired Maronite clergy. After the meeting held at the beginning of the meeting, then her presence in the patriarchal Patriarchate of the Maronian Patriarchate in Bakiri is being discussed, is finally considered in one of the monasteries in the north, especially since this reconciliation will include the dark historical page obtained in the North province in particular, which led to division of Christians in this area for decades. And the possibility of not holding a meeting in Barkk is also due to the claim that the place is in a geographical position between the two parties, because the Patriarchy is in the immediate vicinity of the residence of the head of the "forces" in Maarab, and in return in the place of residence of the head of the "Marade". It is certain that the security factor will ultimately determine the final location of the meeting, without excluding the geographical location at the last minute for security reasons.

Secondly, reconciliation will focus on ending the anomalous situation that exists between the two sides and opens the way for a complete return of normal relations between parties and forces of Marid in terms of political communication, and not only at the level of social communication between parties and supporters. General ideology, political vision of local and regional issues, relations with Syria and other issues. Consequently, reconciliation will be primarily conscientiously, with a minimum political consensus, but will not be accompanied by any obligations or political items that will combine both sides, apart from maintaining open politics, dialogue and communication, and accepting the freedom of political action.

Thirdly, there is no project for any future electoral coordination between the "forces" and "al-Marda", where the two parties are likely to remain in a position of electoral rivalry, even if the date of the parliamentary elections is still far away, with a time factor likely to lead to possible changes in positions. Downloads. He recalled that the results of the last round of elections showed that the "forces" and "Marad" were the two main constituencies in the region, with about one-third of each vote, while the other three were divided with the third, first, then the "Independence Movement" Syrian National Socialist Party ". For this reason, there is no common interest in any electoral alliance between the "forces" and "al-Marda" in terms of the operation, as it will not be added by any deputy of any of them, if we recognize that the political differences between the two parties are exceeded in order to enter in an electoral alliance.

Fourth: both "forces" and "Al-Marda" will ensure that their reconciliation is not aimed at any political party, nor does it intend to imitate any party. He is not directed against the head of the Free Patriotic Movement, Basil specifically. However, despite all the assurances that will be published in this context, the general flows of the current relationship between "present" and "force" and "waste" can not be under the influence of mere reconciliation. It is certain that al-Baik al-Zoghartavi is trying to remove the main obstacle to his presidential ambition, the opposition Geagee, which had a significant effect in changing the compass of the recent presidential elections, alongside the key role parallel to the Hezbollah Secretary General Saiyed Hassan Nasrallah. For its part, al-Hakim wants to have the "final word" in choosing among the main candidates for the upcoming presidential elections, if local conditions and regional balances do not allow a personal fight against the presidential battle. And Franjieh.

Fifth, Geage and Franjieh will ensure that their political and strategic position is secured by means of permits and attitudes that will convince allies and confirm their continuity in the general political principles of each of them. On the other hand, some of the political opponents and "forces" and "al-Marda" will try to "influence the media fire" on reconciliation negatively, while other political forces are expected to take steps to strengthen their relations with certain political forces From the review of alternative options in response to convergence and "force" and "waste", which is not in the interest of many who want to remain in the case of hostility between the parties.