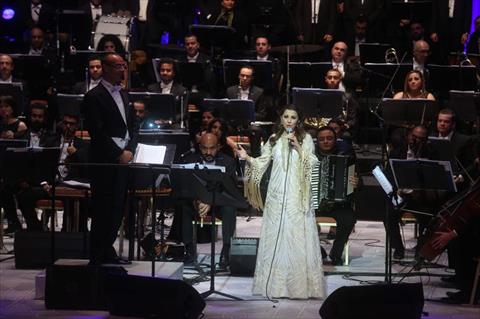 Lebanese singer of the Opera crowd: Egypt in the text of my heart .. When I visit, I feel happy
In the midst of a huge crowd and in the atmosphere of fantasy, the Arab Music Festival and the festival ended the last 27 pages of the evening, at the Great Opera in the presence of Dr. Anas Abdel Daiem, Minister of Culture, dr. Magdie Saber, Director of Opera and Festival and Artist Jihan Morsi, Director of the Festival and Conference.
At the beginning, the star Magda El Romi continued with her audience, greetings all, and expressed her happiness to revitalize the closing ceremony and its presence in the land of Egypt, the capital of history and civilization, observing some of the timeless artistic figures as their highest ideals, as part her memories of childhood. "I am an Egyptian," he said, and told her a lot about Egypt, and that my father graduated from Fuad and the Institute of Music, and he loved Egypt, and therefore Egypt in the text of my heart, and when I was in it, I felt joy.
She continued: "I adore Nile Egypt, and I love to watch it at night and follow the Nile ships and songs from them."
Majid Al-Roumi also paid tribute to the Egyptian army and described it as the first line of defense for Arab dignity, confirming the eminent status of the Egyptian people in their hearts, repeating "we love you Egypt."
Majid Al Roumi has confirmed that she has the honor to work with late director Joussef Chahine, who is finishing his tenth anniversary this year, saying that the story of the film was realized in the war in Lebanon.
Al-Roumi urged the Egyptian people to gather around President Sisi, emphasizing that he did not say that because the ceremony was attended by the First Lady, but because she sees that international politics wants chaos in our country, evidence of what is happening in Syria, Libya and Yemen.

Magda Al-Roumi gave Egypt a song called "Crossroads", accepted the Egyptian flag and bowed to her. She finished the ceremony with a song with name and country.

During her speech, Al-Roumi joked that the intensity of her love for the movie wanted to marry a man like Hussein Fahmi. He also wished great love for Najli Fati and felt the pain in his heart when the artist Abdel-Vareth died.
Upon completion of his speech, the head of the opera, dr. Magdi Sabre handed the memorial shield in honor of her father, late musician Halima Roumi.
For more than an hour and a half, the voice of the dreamer joined everyone who followed the journey into the world of charming and singing accompanied by the orchestral Philharmonic, led by Maestro Nader Abbas with a large number of masterpieces, including my uncle asked me, the eyes, the world for us , the color of love, heard my heart, When the sky comes, Mtrahk my heart, do not ask, I retired from the word, intersection of neighborhood to live a peasant and swear by my name, which ended their artistic manifestations.

The last night of the Arab Music Festival was held at 6 pm in a small theater where the Minister of Culture and the President of the Opera presented the prizes of the accompanying competition, in which the name of dr. Ritaiba Al-Hefni is a singer for young and children, playing violin in the name of the late musician Saad Mohamed Hassan. Singing competition for young people who rank first among Ahmed Magdi Abdel Hakim and Ahmed Abdel Hamid Nafea, worth fifteen thousand pounds and won the second place equally Ahmed Ragab Abdullah and Mohammed Tarek Mustafa and the value of his prize of twelve thousand pounds and won the third place Saudi competitor Muhannad Tal The value of the prize was ten thousand pounds, and in the children's competition, the first place was shared by Wafa Emad Mahmoud, Ashram Ahmad Saeed and amounted to seven thousand pounds, and the second place was taken by Khalid Ahmed Sadik and Azhar Rag Ab Mustafa, worth five thousand pounds, and the third place was awarded the same prize of Iasmin Osama Hassan and Mariam Saied Najjar and worth three thousand pounds.
The violin competition won his first position, Fares Tamer Mohamed Ali with a value of fifteen thousand pounds, Ahmed Hassan Atteia is worth a total of twelve thousand pounds, and the third place are Ismail Khalifa Ismail and Karmina Ioussef Aziz, and the prize is worth ten thousand pounds . The judges also granted recognition to Muhammad Ahmed, Taki Hasan Radwan, King Mohammed Fathi, Mahmoud Ahmed Avad, Louai Abdoun.
Other theaters also called for events that took place at the Arab Music Institute Theater. The concert of singer Iman Abdell Gani and the lawyers Majid Sorour and Saied Darvish theater was held in Alexandria Opera, and the concert was performed by Maestro Ibrahim El-Moghi. The Cultural Center in Tanty hosted a concert by Iman Al-Bahr Darvish, accompanied by a band led by Maestro Hazem Al-Kusbaji after splitting Ghada Adam, Amira Said, Mei Hassan and Ahmed Said.