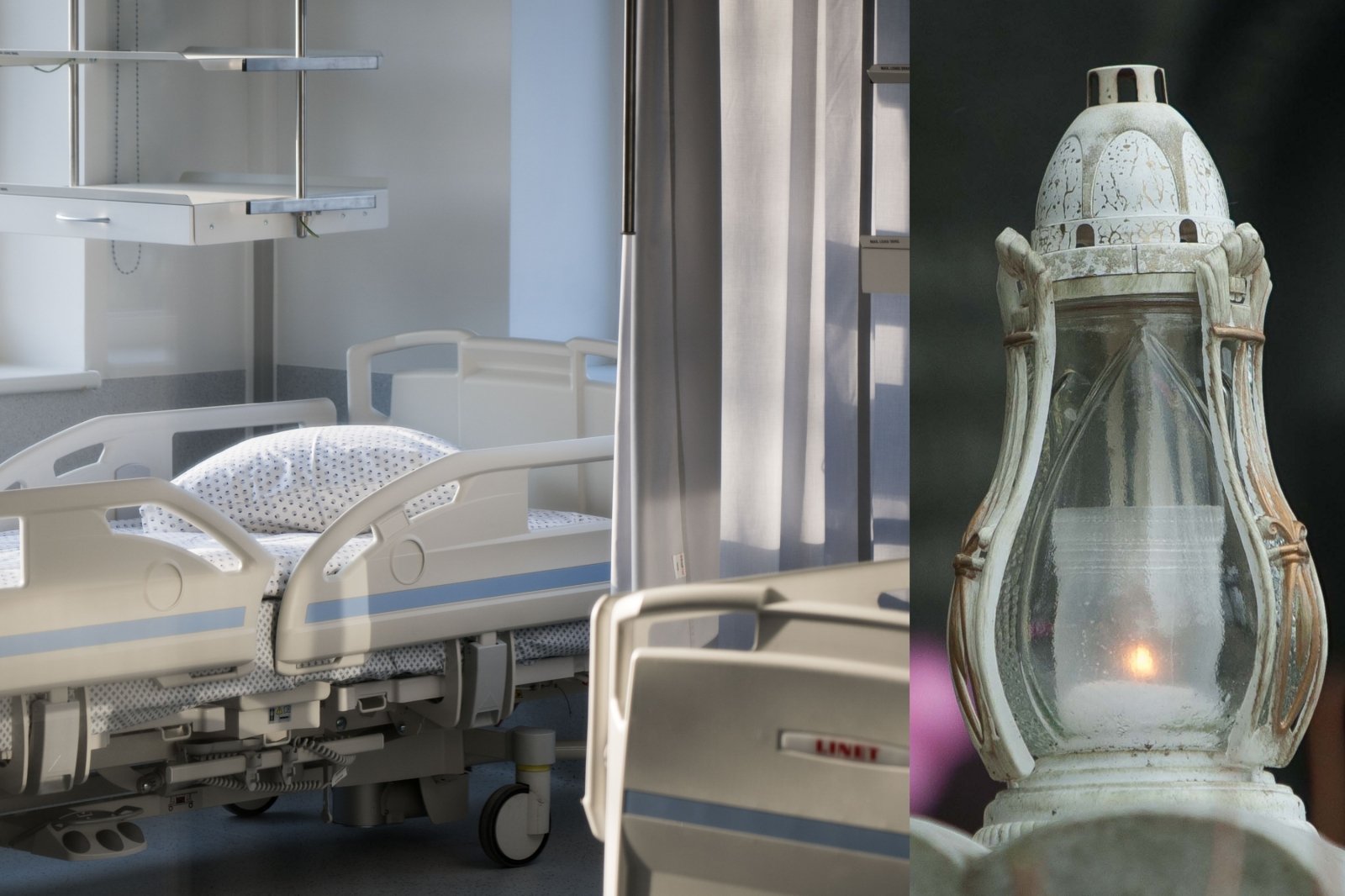 “A hundred times I said,‘ Echoes, go and get vaccinated. He didn’t listen to me. His decision was not to get vaccinated, ”says Arūnas, who is experiencing a loss.

The Panevėžys vaccination center in Laisvės Square has been half empty for some time. This month, vaccinate as much as in a day in early spring. In contrast, the mobile point is hot due to the influx of unvaccinated people testing.

Extreme treatment did not save

Today, relatives and acquaintances say goodbye to Aidas Nauronis, the director of the company Deliuvis.

The life of a 53-year-old man with COVID-19 died on September 19 in the Department of Intensive Care and Resuscitation of the Santara Clinics in Vilnius.

Arūnas says his brother heard the first signs of the disease about a month ago. The rapid test showed a treacherous disease and the diagnosis was confirmed by a PCR test.

At a temperature of about 40 degrees and even without the drugs dropping them, the ambulance called took Aida to the infectious disease clinic of the Republican hospital Panevėžys. When his condition worsened, the man was taken to Republican Hospital for resuscitation. According to Arūnas, his brother remained there only a week. The doctors who fought for the life of Panevėžys used the last straw: the patient in critical condition was transported to the resuscitation of the Santara clinics, where in these cases an extreme treatment method is used: the oxygenation system of the extracorporeal membrane (EKMO) is connected to save life the blood returns to the patient’s bloodstream.

The patient’s lungs no longer functioned.

The three-week struggle for the life of a Panevėžys resident ended in defeat. COVID delta variant
he had already severely damaged his lungs; it was no longer possible to restore its function.

“The brother’s decision not to vaccinate ended tragically,” Arūnas says.

He himself says he was in a hurry to get vaccinated as soon as the opportunity arose. When the vaccination of his age group was announced, Arūnas went to Vilnius mainly because he would still have to wait for the vaccination in Panevėžys.

“I said, echo, go and get vaccinated. He didn’t listen to me. His decision was not to get vaccinated. The brother was convinced that if he got sick, it would be an easy way and he would get sick like many. But it happened differently, ”Arūnas said.

Echo trusted his body: he was a healthy, strong man with no comorbidities. According to Arūnas, even the doctors themselves were surprised that the 53-year-old was free of disease.

“But COVID also affects those who do not have diseases and even die. Opponents of vaccinations motivate this to be their choice. And I suggest: when you return home, look into the eyes of your children, your children. mothers and think about what awaits them, if you are not there in a week, ”says Arūnas, who has lost her brother.

Relatives of the deceased saw the doctors’ effort to remove A. Nauronis from the clutches of death.

“We express our sincere gratitude to the doctors of the Panevėžys Republican Hospital, its Infectious Diseases Clinic and the Santara Clinics for their efforts to save Aido’s life. They did everything possible, but the terrible and insidious illness was stronger than the efforts of doctors, ”says Arūnas.

After losing his own brother, a businessman who reads reports of several people killing the virus in Lithuania every day says he finds no rational explanation for why vaccination is avoided even in this confrontation.

“Someone eats bee’s breast, sees some conspiracy theories. Echo probably found such kind people. They live, Aidas is already in the coffin,” sighs A. Nauronis.

Eugenijus Preidis, head of the infectious disease clinic at Panevėžys Hospital, who meets COVID patients at work every day, points out that this new disease is so insidious that doctors cannot even answer how the condition will change. of the patient in just one hour.

“At best, I can make a one-hour forecast, maybe two. This disease is so threatening that it begins to progress abruptly: if the patient’s condition remains stable at 12 hours, he may be in resuscitation at 14 hours, ”says E. Preidis.

According to the doctor, the onset of headaches, muscle aches, bone fractures, fever, cough, the disease can progress rapidly to a stage in which lung activity begins and stormy respiratory failure begins.

Although, according to E. Preidis, the disease is more dangerous for the elderly, who also have other pathologies, the rampant strain of COVID rampant does not choose age. Recently, a Panevėžys resident under the age of 40 died of coronavirus.

“The course of the disease depends a lot on the body’s immune system. Doctors see how seriously people get sick, so I strongly recommend vaccination. I’m not saying the vaccine completely protects against infection.

But we see those who have not been vaccinated die. There have been isolated cases in which people have died from vaccination, but have had other terrible diseases: lung cancer, advanced stomach cancer. In short, only 5 out of every 100 deaths were vaccinated, but they also had severe comorbidities, ”the doctor calculates.

According to E. Preidis, doctors often have to gnaw on serious unvaccinated patients because of a mistake: the free vaccine was denied.

“This disaster really leads to the vaccination of their loved ones. The death of a loved one taught another loved one. It’s scary, but it’s like that,” says the head of the Infectious Diseases Clinic.

Seniors will receive a call

According to Karolis Valantinas, director of the Panevėžys city polyclinic, 1,000 people have been vaccinated in the capital of Aukštaitija for a whole month a week. In March, during the maximum vaccination period, the vaccination center vaccinated so many a day. Despite this, Panevėžys remains the leader among the main cities in the country in terms of vaccination rates.

K. Valantinas had expectations that after the September 13 vaccination, the center of Freedom Square would once again be full of people. Government plans to make paid coronavirus tests available to unvaccinated workers raised those hopes for doctors.

“But a few days before that date, when the government changed its mind, the antigen tests were left free, leaving no incentive to go vaccinated. Instead, our moving point now crosses all the seams. If an employee of a manufacturing company wants to take a test, he has to wait a few days straight. I hope that in October the tests will be paid for and the flow of people to the vaccination center will reappear, “the head of the polyclinic said.

As early as next week, Panevėžys residents over the age of 75 will receive a special personal invitation to get vaccinated.

According to K. Valantinas, about 80,000 have not been vaccinated throughout Lithuania. people of that age.

The Ministry of Health has consulted councils this week on how to convince them to decide on vaccination.

The Panevėžys polyclinic plans to call unvaccinated elderly people from Monday and, if they manage to persuade them, they will even return home to be vaccinated.

“We will repeat what happened in January-February, when we called the elderly and invited us to get vaccinated. For those who did not want to, we will now try to show that it is worth getting vaccinated,” says the director of polyclinic.

According to K. Valantinas, 80-90% of patients with COVID in hospitals unvaccinated makeup. The director of the polyclinic agrees that getting vaccinated can make you sick, but according to him, this patient is 20 times more likely that this patient does not need a hospital.

“He just realized. We all swim while taking a sip or drowning while eating. Those few seconds when you can’t include air are heavy and we imagine a person who is constantly tormented by this condition for weeks. I never lead theorists. I believe what science says, in this case the World Health Organization, the European Medicines Agency The number of vaccinated and unvaccinated dead people speaks for themselves. stupid not to take this opportunity to survive, ”K. Valantinas compared.