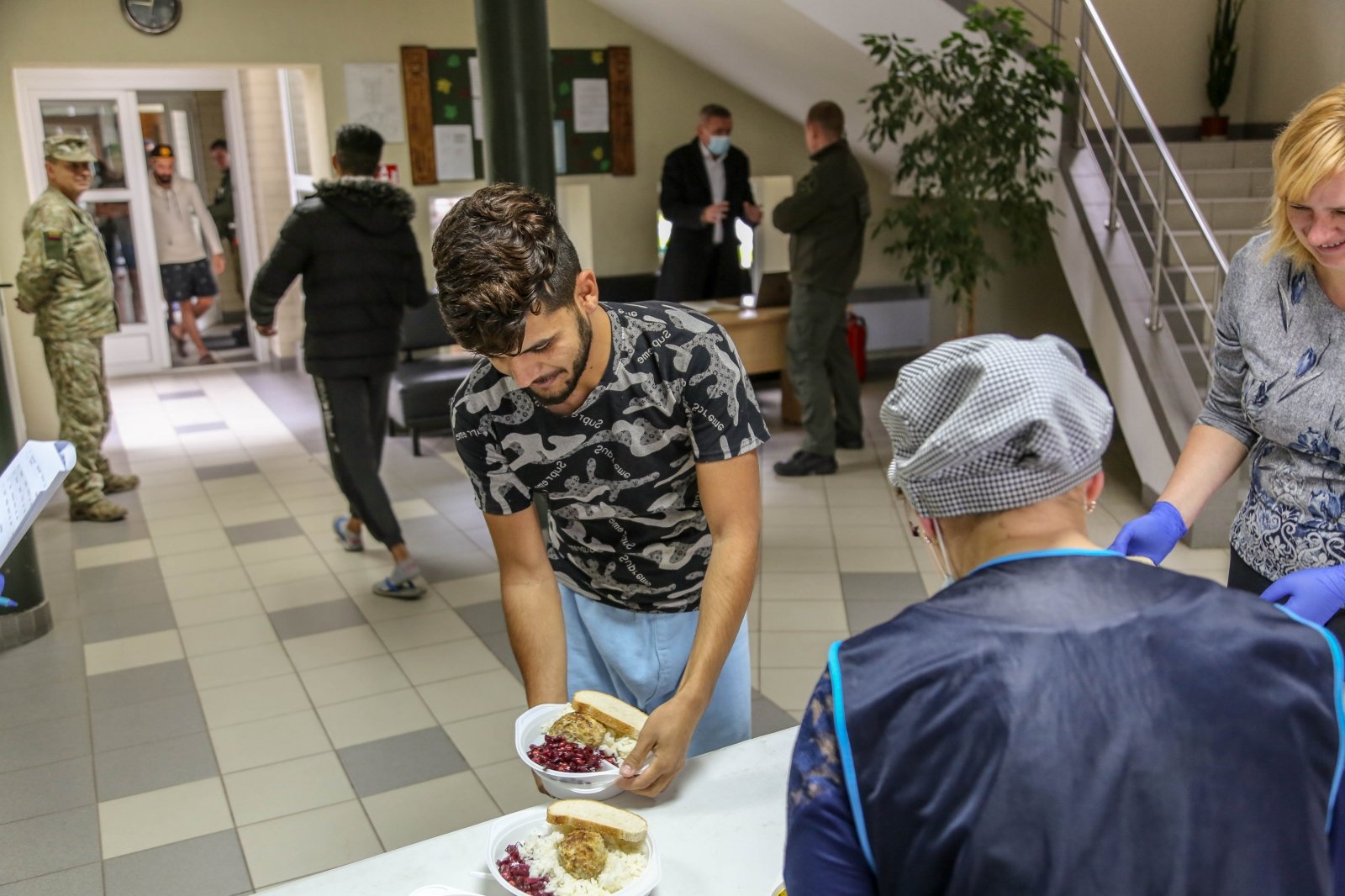 Outside there are still several tents, from which, curiously, the newcomers were in no hurry to leave. When the border guards prepared beds for everyone inside the firewall, the migrants initially refused to go there as they thought staying in the tents would be released sooner.

After all, even the toughest ones broke down this weekend after the cold and now everyone is already living inside the firewall. People in much warmer climates already said in early September that a green winter had begun and that by Saturday a white winter had already begun.

Raimondas Bučelis, the head of the Švenčionys border firewall, is glad that these and the last migrants will be relocated elsewhere, and here the border guards will be able to work directly and protect the state border. The firewall was never meant to become a home for newcomers, but it was flooded with so many that there was simply no other choice.

The church was rescued

At first, when an unexpected influx of migrants was flooded, it was difficult to cope, they had to use a toilet and eat portions of dry food. There is now a container house with showers and toilets outside, and the township takes care of the hot meals.

While visiting Delphi at the Švenčionys firewall, local pastor Stanislavas Matiukevičius also arrives here, carrying things donated by the parishioners: clothes, blankets, toilet paper. Here he visits regularly with people from Carito, but he refuses to talk about the help he provides. 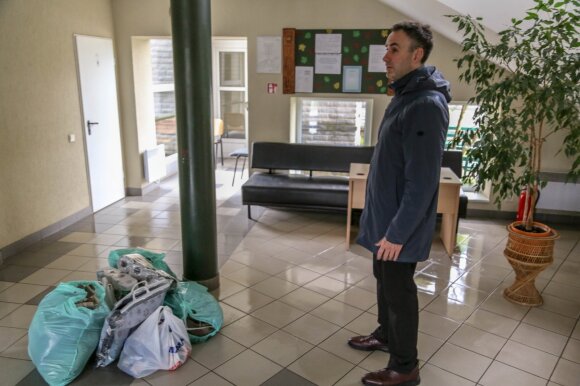 “Good deeds must be done calmly,” the priest repeated several times, and later hinted that even Cardinal Audrys Juozas Bačkis had come to visit the migrants quietly.

Finally, the priest says he works hard with local people not to look at hostile migrants, but to try to help them.

“If we don’t, we are not Christians,” the pastor states. “There’s a lot left to go through before they become us.”

There is a lack of entertainment for migrants

At noon, migrants are not yet visible in the corridors of the firewall, although they can walk here freely. When you enter a room, you initially get a strong smell of smokers and sleepy looks from the beds, most migrants still wake up.

“We’re going to sleep at night, maybe 4 nights,” says a young Afghan with a smile, who came here with three friends, but now one is left.

He says the family paid the agent for his trip to Europe, so he found himself in Lithuania.

“Maybe I would start a business or open a mobile phone shop,” he said, asking her what she would like to do here. 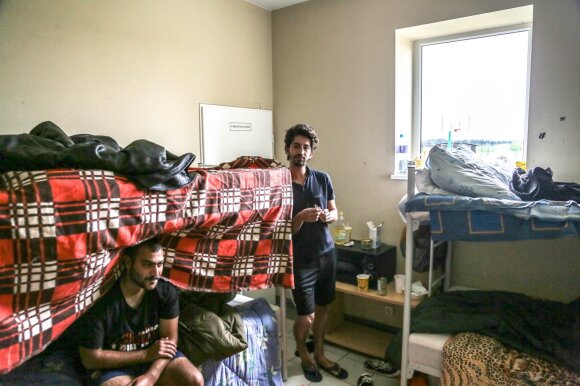 The man says he is only 17 years old, but later the border guards specify that the Migration Department has already determined that he is at least 20 years old. get better living conditions. However, their lies become apparent as biological tests that determine actual age are performed.

The Afghan says he was moved to this room a few days ago and had been in jail for some time before attempting to flee. Migrants call the prison a temporary detention center because there are bars, even though they are open. The interlocutor explains it all laughing.

“Yeah, it’s like an adventure here,” the guy answers my question about how seriously he takes everything.
He says acting here isn’t much, he’d like to have at least a gaming computer and a TV, but he has to settle for cards or play a blind hen.

However, not all migrants are so happy, another Iraqi they know says he has been here for months and goes crazy, still has no phone and can only talk to family for a few minutes.

The question of why he stays here and did not take advantage of the offer to get a plane ticket home and 300 euros angers the boy.

“It’s nonsense, they don’t stop coming and they offer it. I came here because I want a good life. I don’t need money. I have money. But I need to get out of this mess, ”he says. 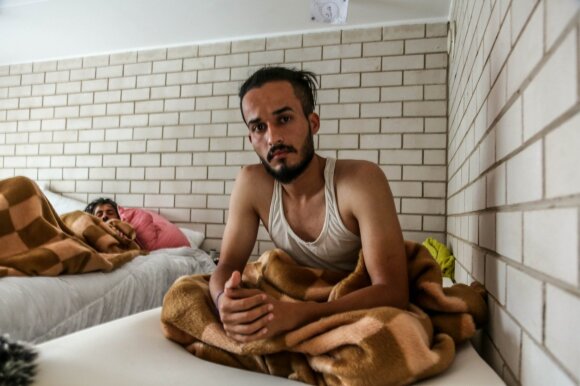 Asked how he got here and what his story is, he replies that it would take a long time to tell him, but he lifts his shirt and shows a large scar on his stomach.

“Here you see,” he says, complaining that Migration Department specialists didn’t hear him normally during the asylum conversation.

As we talk to this Iraqi, another resident comes asking for the services of a dentist. Later, border guards said that with the help of a dentist, he started systematically demanding them over and over again.

“He’s probably thinking his teeth will be repaired. The doctors said we’d definitely give him first aid, but if we need to take care of our teeth, we let them pay,” border guards say, adding that everyone here gets medical help.

Officers of all sorts of curious stories can tell many things. For example, they recall a case in which migrants bought eggs and later saw a snake stuck in it. They immediately threw all the eggs, thinking the snake had come out of one of them.

Here, migrants domesticated the cat, which is now gently lying in beds and became a resident of the firewall. 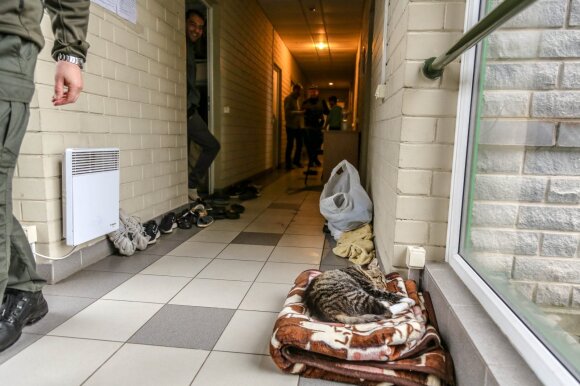 1 pm immigrants come for lunch, get hot soups and today’s main course is a rib with rice and beetroot garnish. They rush to pick up food from the beds and smile in Lithuanian at the employees who brought it. 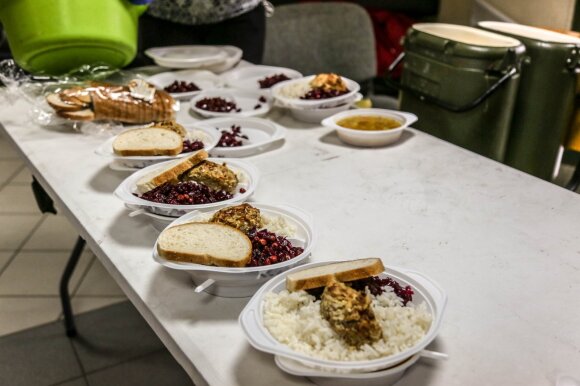 A lawyer was found

At the same time, a lawyer representing the two migrants arrives at the firewall. Relatives of the newcomers found him on the Internet and later word of mouth spread about the aid.

“Those who are financially stronger can find a lawyer, but if they need state-guaranteed legal assistance, it’s harder,” he said.

According to the interlocutor, most migrants are not very rich, as they have been given lifelong savings to travel to Europe.

“According to rumors, families sell homes for the trip. Getting here costs at least 3 thousand EUR, maximum 12 thousand. Euros. They already have a lot of money, they say goodbye to everything they had on their land and go to the bank.” , he says. 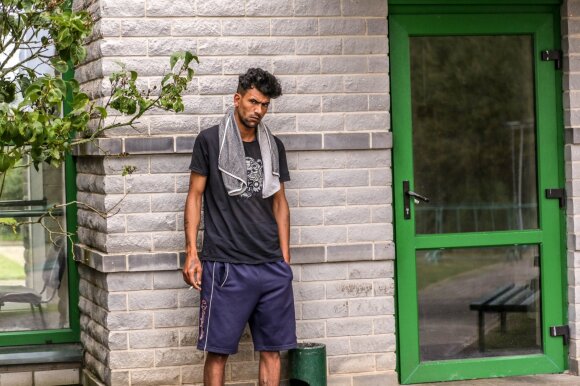 According to the lawyer, the greatest desire of migrants is to free themselves from detention and live independently. The lawyer helps to fulfill this desire by contacting the Migration Department. Our law states that if a newcomer has enough money to rent an apartment and support himself or herself, he or she should not be detained or released to wait for his or her asylum application to be processed.

“If you have your own funds, for those who will eat the state budget, let them eat their own funds,” he says. “I’ve already helped, one now lives alone, waiting for an answer and that’s it.”

It is true that proving that you have money is not enough. Evidence must also be provided that you can in fact apply for asylum. This is aided by documents about private enterprise or the indictment of law enforcement in the country of origin.

It is strictly forbidden to use the information published by DELFI on other websites, in the media or on other sites, or to distribute our material in any form without consent and, if consent has been obtained, it is necessary to cite DELFI as font.