One working afternoon we visited the village of Kalviai, Kaišiadorys district. First of all, the roads attracted the main local tourist attraction: Kalvių Šv. Church Antanas Paduvietis – towards a.

Many first-time visitors are amazed to discover the treasure of architecture surrounded by beautiful nature. It also surprised us. After all, there are only two such round churches in Lithuania. The second is in Sudervė, 16 km from Vilnius.

The first church on this site was built around 1753 by Mykolas Pacas, scribe of the Grand Duchy of Lithuania, who also owned the Kalviai manor house. In 1792, the church, under the patronage of Joseph’s daughter, Joseph, burned down. Juzefa herself died soon after and her widowed husband Tomas Vavžeckis built a new brick one.

It was the first brick church of its kind in Lithuania. It opened its doors in 1806 and was consecrated in the name of Saint Anthony of Padua. 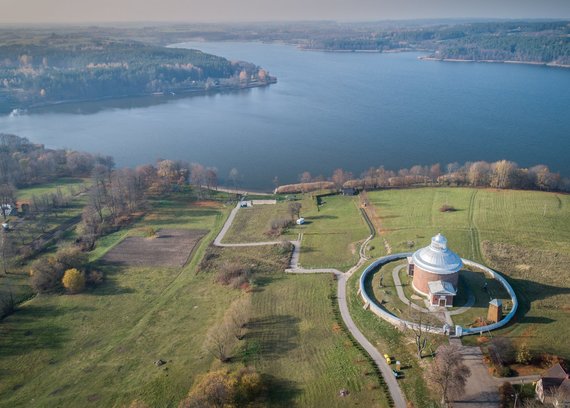 The entrance to the church, the author of the project is unknown, is decorated with a wooden sculpture of the Crucified, which has survived since its construction.

Its walls are decorated with a mosaic of fine pinks and the view from the courtyard is worth a million. The largest lake in Kalšiai, Kaišiadorys district, can be seen in the foothills. Blacksmith School used to be next door, but closed about five years ago. A church where you will not hide

“You’ll always feel at the center of this church; you can’t hide anywhere,” said Rita, a parish rector and religion teacher at Kruonis Gymnasium, who smiled at us inside.

Cozy and bright in the church. Above the heads is a dome with windows reminiscent of the Roman pantheon. The heated stones retain heat until November, so it’s not cool. Wedding Rings, artists who hold private celebrations like to celebrate gold rings here, because the church is a bit cozy and very welcoming.

True, even three altars and all of them, different styles. Pay attention to the wood with an unusual decoration.

“Once upon a time there was the altar painted with shame, there were no sides,” Rita revealed. He said that every time about 30 faithful attend the Mass; this number is enough for a small town. A local woman living right here plays the surviving organ.

“The biggest advantage is that when Mass is ordered here, it is offered on behalf of one person, not ten. Every Sunday someone orders them,” Rita said.

According to her, in the summer the church is considered “on the net”; without prior agreement with the pastor living in Kruonys, the interior can only be seen through the net.

He returned to the Blacksmiths

After leaving the courtyard, we are greeted by Lina Brazionienė, the president of the blacksmith community. She is probably the most local resident, who returned to the village after studying and working in Kaunas for her ancestral property.

“Oh, and the man I think is coming from here. He is also a man of nature. We decided we were going to work in Kaunas. After all, “dancing” to the freeway, and in half an hour it’s already in place. Yes, we have been living in Kalviai for 15 years, we are dedicated to construction. We still have horses and sheep, ”laughed Lina. 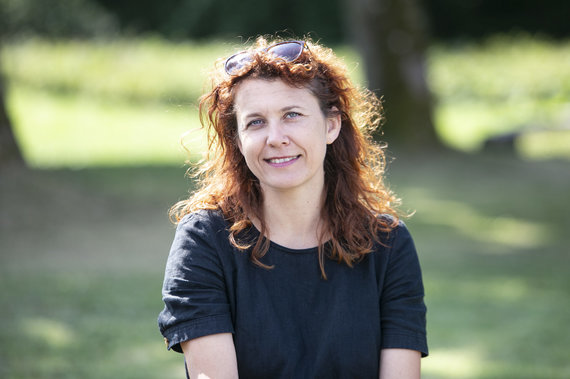 After passing the wooden belfry and crossing the stone wall that surrounds the church through the door, we begin to descend to the foot of the narrow paved road. It opens to state land that stretches for about 100 meters along Lake Kalviai, which has become a cozy resort and bathing spot.

According to Lina, river crab was found in the lake and is an indicator of clean water.

“10 years ago there were breweries here, the locals swam more. It’s true that the men of the mountain themselves are not going to swim on this new beach yet: they started to rest in the old place.

Everywhere, both for and against. At first, breweries, we fixed it, become a problem again: there are no longer places to help because of the abundance of summer visitors, local farmers who work do not go through the furnished machines, they are ruining. Like Nida, the joy and rage of the locals came from that joy. He has to survive the season. If it was a rainy summer, no one would face that concern, ”laughed Lina.

On a hot weekend, this beach receives many holidaymakers, who come from both Kaunas and Vilnius, so the main street and access to the church are “blocked” by the abundance of cars.

On a hot weekend, this beach attracts many tourists, who come from both Kaunas and Vilnius.

It was once estimated that about 70 guest vehicles were delivered here and about 400 people rested on the shores of Lake Kalviai at the same time.

VIDEO: There is an influx of holidaymakers near Lake Kalviai 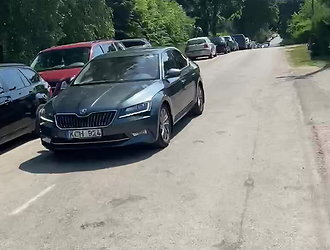 Here, a local woman takes care of the flower gardens, of the general order, without compensation. There are volleyball and basketball courts, swings, changing rooms, toilets and even a wooden stage for community summer celebrations. It is believed that a water chamber event will take place in the future. “The blacksmith community is able to attract a lot of support, more than one place has been renovated. There is no shortage of ideas, but there must be people who apply them. I want to make this shore of the lake more beautiful, to offer aquatic entertainment “, said Lina, sitting on a bench and looking at the expanses of the lake.

About 400 people rested on the shores of Lake Kalviai at the same time.

A great place to ski

If you think there’s only something to do with blacksmiths in the summer, you’re wrong. The community president revealed that last winter, when there was no shortage of heavy snow, she discovered Lake Kalviai in other ways – it’s perfect for cross-country skiing.

“Large area: you can skate anywhere. In two hours, I skate around the perimeter of the lake. Your own ice rink. And fishermen love Lake Kalviai, especially in winter. Set up a fishing tent with ice, it warms up, ”smiled the interlocutor, revealing that the locals are going to work in Kaunas, Kaišiadorys, Alytus, Prienus, Jieznas and have set up a grocery store in Kalviai, where they can find everything, many farmers.

“There may be three cows left in our village,” Lina laughed.

We soon begin to explore with him the origin of the name Blacksmith. Two versions prevail.

“Because of the mountainous terrain. Or because many blacksmiths lived there. Our last blacksmith may have died a decade ago, so the city’s main symbol, a wish-fulfilling fish, was struck, curiously, by a non-local blacksmith. The blacksmiths ran out of blacksmiths “, laughed Lina. If you want to settle in Kalviai today, buy a lakeside property; you will have a hard time finding it, almost the entire coast is “privatized”.

“To know how many inquiries I receive about cottages, no one would like to buy. Possible but not easy. The supply is not complete. I’m not talking at all about the shores of the lake. If an offer appears, it stops immediately. Oh, what prices we have? It was a small plot, as far as I remember, of 100 thousand. he asked for euros “, assured Lina.

Asked why people should go to Kalviai, the interviewee replied that, by the actual Lithuanian nature, it is amazing here.

“If you want to spend your free time by the water, flee more of the city, in Kaunas County there is not much to go on,” the Kalviai community president smiled.

There is a lack of coffees, which pulls you to another village

What is even more significant to blacksmiths? It turns out that residents of the big cities here also attract goat’s milk cheeses to taste.

In addition, the environment of Lake Kalviai is very interesting from a historical and archaeological point of view. Traces of Paleolithic-Mesolithic (approximately 11,000 BC) settlements were found here. To the southwest of the village, in the Kalviai forest, are two burial mounds, typical of the 9th-12th centuries.

Accommodation is also offered in the communal house: a room with a fully equipped shared kitchen will cost 30 euros per night. It is true that guests of the city do not have restaurants: here there are no cafes, from time to time only a cart with coffee and ice cream arrives on the beach. So, to spend the night, the locals go to Birštonas or Davainonis, 25 km away, where Villa “Forest Natos” is located in the regional park of the Kaunas Lagoon, surrounded by nature.

Before the pandemic, the hotel and the remote five-room restaurant, located in the refuge of beautiful nature, were especially popular with foreigners.

Although the hotel has not been very busy lately due to its late forties, the Forest Scores have attracted and continue to attract live music evenings on weekends (often even free), outdoor gazebos, a terrace and an interesting menu. 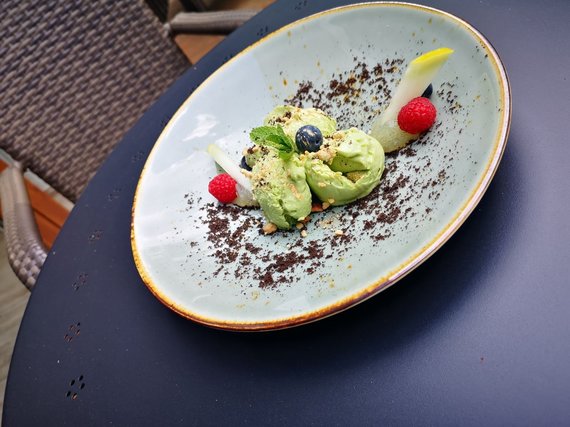 The Miško Natų restaurant prepares meals under the vacuum Technology (in French it means empty). It is based on the production of vacuum, at a temperature much lower than normal, so that the color and taste of the product do not change, it remains juicy.

This year, the chef of this place has presented an exclusive avocado-flavored ice cream, which alone is worth visiting this oasis of peace.

“Most dishes are born improvised. You put the recipe in your head and, on the plate, you have to follow the idea, put the dots on the ‘i’.

There are definitely vegetable ice creams in Lithuania, but I wanted to create something from avocado: more interesting, kitokesnio. After all, avocado ice cream sounds different than lemon or chocolate ice cream. We used four ingredients to create them. It took five tests to get the taste we wanted, ”he said 15 minutes, Gabrielius Kudrauskas, a 26-year-old “Forest Sheet Music” chef, admitted that when he visits other restaurants it’s hard not to take on the role of appraiser and critic, not to look at colleagues ’works through a magnifying glass. According to him, the most popular dishes this year are salmon tartare and mussels.

According to Gabrielius’ restaurant assistant, Šarūnas Česonis, 25, it is easy to find a job as a cook in Kaunas or Vilnius. At the moment, it is possible to negotiate a good salary, because in the summer most of the restaurant employees go to Palanga.

He himself admitted that he was tired of the hustle and bustle of the resort, so this season he chose to work in the village of Davainoniai and his family is close to Kaunas.