"On Monday, a party council will be held, but in this case, as I understand, there has been a coalition agreement. And the coalition's members do not express any claim about the position of the party. president of the Seimas, so it would probably be naïve to expect the Council of the Lithuanian peasants and the Greens Union to give him this position, "Virginijus Sinkevičius told LRT TV.

The minister underlined that this was his position as vice president of the party and that he would do these motions by voting. "As the Council will decide, there may be other reasons. There are more than 50 members there. However, it would be logical for the party's council to have a sequence of events and today, Ponckietis is the most popular politician of the peasant Union and green of Lithuania, "said V. Sinkevičius.

The minister also said that Agnė Širinskienė's "peasant" decision to join the faction of order and justice in Seimas seems strange to him.

"Maybe I should have my own assessment, but obviously this is a strange step. A. Širinskienė is a member of the Lithuanian and Greenland Lithuania Union, but may have plans to go to 2020 with" Order and Justice "in the elections Maybe we do not know something. I do not know it, it's hard to say, "Sinkevic told LRT TV.

At this time, the decision by Vytautas Bakas to leave the group "peasants", according to V. Sinovicius, is a great loss. 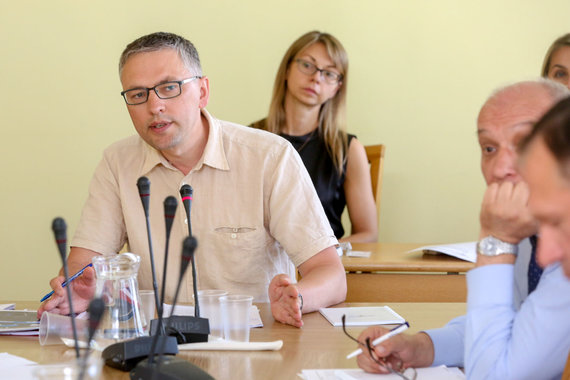 "The departure of V.Bak of the faction is a great loss for the group, since he is a very popular politician who has taken bold steps. And the evaluations may be different because of these steps, but he worked for to the peasant and green Union of Lithuania, "emphasized V. Sinovicius.

The president of the Committee of Defense and National Security of the Seimas V. Bak left Tuesday of the group of farmers. V. Bakas BNS refused to indicate the reasons for its withdrawal and promised to do so through a press conference on Wednesday.

At this time, the decision of A. Širinskienė allowed the Seimas to restore the faction "Order and justice" under the new name "Sobirana de Lituania". The "Order" faction ceased to exist at the end of June, when Valentinas Bukauskas, member of the Labor Party, retired and no longer had the minimum number of seven parliamentarians needed to form a faction in the Seimas.

Last week, "Order and Justice" with the Lithuanian Union of Peasants and Greens, the Lithuanian Social Democratic Labor Party and the Union of Christian Action-Families of the Lithuanian Poles signed an agreement on the governing coalition.