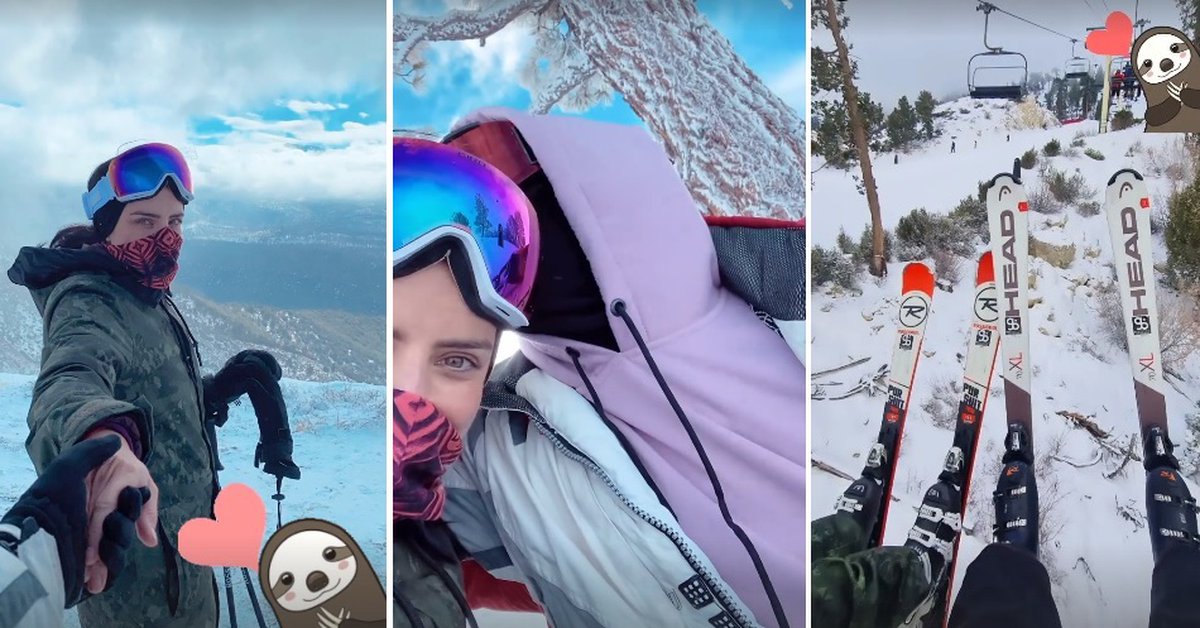 The sentimental life of Aislinn Derbez has been in the public eye since she broke up with Maurice Ochmann and although it is speculated that she has a relationship with photographer Jesh de Rox, yesterday afternoon she turned on the alerts by sharing a photograph with a mysterious man with whom he spent the afternoon skiing and his identity surprising fans of his entire family.

Between snowy mountains and an express trip, Eugenio Derbez’s eldest daughter shared an afternoon of adventure with “someone very special”, who after much anticipation he turned out to be his brother Vadhir.

The actors sent confusing messages through their social networks, where they confused their followers with the identity of their companion, although after a long time they recognized that they were traveling quickly to Big Bear Lake, California.

The story of his cold journey was told in his Instagram stories, in which they claimed that the person responsible for this trip was Vadhir, who drove his older sister to ski on her day off and away from his daughter Kailani.

“I’m here, in the snow with someone very special. I want them to see him well because he’s been a very important part of my life lately, ”Aislinn Derbez said before her brother uncovered her face and complained to her because they’ve always been together.

“Because lately, no, if I have always been in your life“, Defended Vadhir Derbez before letting go of several laughs.

A similar moment was shared from the account of the singer as well. Here he appeared in a picture as his sister stroked his face before uncovering his identity.

“I’m going to introduce them to a person I’m with. We took a trip and I think it’s time for me to show them who I’m going with“He said before Aislinn took off his eye protection.

“We come to have a phenomenal time, because singleness is tasty,” Vadhir stressed after surprising his most loyal followers.

After revealing their identities, the brothers commented that last Wednesday was Aislinn’s day off, as Kailani was under the care of her father Maurice Ochmann, which was taken advantage of by Vadhir to take her expressly. to a winter adventure.

“I had a lot to gain from skiing and I took advantage of what Mau has in Kai and that the young lady was available to take me here to Big Bear Lake and ski for a while, ”the young musician stressed.

Aislinn said the improvised plan thwarted his plans: “This vague, peasant, sonacó me. Yes, I had to do it, I had to sleep, I wanted to watch TV, read, do nothing, be alone. “

The actress remarked on her loneliness to rule out any rumors about her love life and is that for several months he has been associated with the photographer Jesh de Rox, with whom he has even traveled in the company of his daughter already in spiritual recesses.

Rox has been seen more than once at the home of Eugenio Derbez’s eldest daughter and last December they were caught trying to get out of Los Angeles, California airport; in addition this month they enjoyed a dream trip to Hawaii.

This week Jesh re-posted a photo of Aislinn with a romantic message, but only received a friendly comment from the actress.

“I’m so lucky to have your invaluable friendship in my life,” the young mother responded to the post she starred in the photographer’s account.

MORE ON THIS TOPIC

“I’m so lucky for your friendship”: Aislinn Derbez and her alleged boyfriend exchanged confusing comments

Wandavision: All the easter eggs in Chapter 7