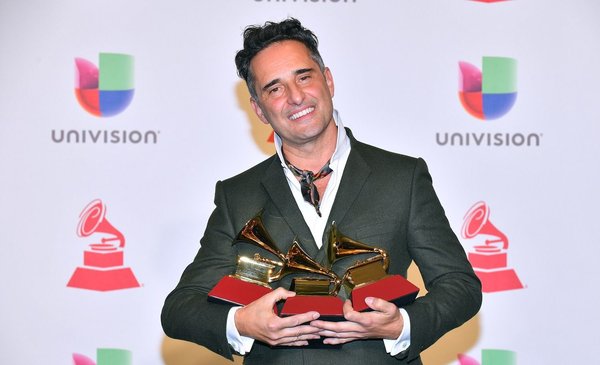 Uruguayan singer Jorge Drekler was the king of the night when on Thursday he won three Latin Grammys in the Best Songwriter Album album for his latest album Ice Lifeguard (2017) and the best recording and song of the year on the theme of Telephony. The musician received prizes in Las Vegas, and one of them devoted himself to remembering his mother Lucero, as well as his sound engineer Net Garcia, who recently died.

Thanks to that, Drekler also remembered his uncle, who gave him the guitar with which he composed his first songs. Ice Lifeguard, according to the musicians, before the audience is collected in the MGM Grand Garden Arena in Las Vegas, the United States, the work is composed exclusively of the guitar.

Uruguaian competed in the Best Songwriter Album category The following David Aguilar, I am Kani Garcia, Composers Claudia Prieto and 2: 00 AM would be Rakuel Sofia.

The Latin Grammy Awards won a heart in Las Vegas on Thursday in the heart of Uruguayan singer Jorge Drekler, a cult singer of soft pop melodies, and urban and tropical rhythms of Colombian musicians, most of whom were directed by sensual cadences and explicit lyrics.

Drekler triumphed on the Ibero-American music gang, winning three gold recorders: the song of the year and recording of the year for "Telephony", as well as the best album of singer and poet for "Ice Lifesaver".

Although his style is in the antipodes of the reggaeton, Drekler himself acknowledged this genre, the origin of which is shared by Jamaica, Puerto Rico and Panama, and which is continually sounding in Spain and Latin America despite constant criticism.

This is how Drekler responded to Colombian reggeetist J Balvin, who complained just before the reggaeton was a "something that was discriminated against".

"It's time to create new legends, new motivations," he said, raising his golden turntable into an urban music album on his green-colored hair.

Although they did not receive the main awards, the Colombians – and especially the Colombian reggaetonists – held the night.

Maluma, who likes J Balvin from Medellin, won the Best Contemporary Pop Vocal Album for "F.A.M.E." and he remembered to thank the award he was one of the most famous last year and returned home without a "one Grammy".

Also Medellin Karol G, winner of the best new artist for the success of "My Bed", where she speaks lovingly how his bed sounds.

The one who broke the reguetoner's trend was Colombian Carlos Vives, the legend of the vallenato, which won the award for the best contemporary tropical album "Vives".

Spanish singer Rosalia, who debuted last year with her flamenco fusion with R & B and electronics, won this year's Latin American ear from "Malamente", hitting her album "El mal kuerer".

The theme was two golden turntables for a better urban fusion and the best alternative song, two of the five rewards it was trying for.

"This is a dream," Rosalia said, thanks to other women in the industry who "learned it can."

In the meantime, Mexican Luis Miguel did not go to get his year's prize for the album "Mexico forever!", What he deserved from the audience.

"I'll take care of giving it personally," the singer and actress promised Thalia, trying to calm her mood.

Participants also complained about the absence of Puerto Rican Daddy Iankee, the "boss" of reggaeton and pioneer of the genre who won the best urban song for his viral success "Hard", but did not go to the party.

The party at the MGM Grand Garden Arena in Las Vegas saw the performances of artists such as J Balvin, Drekler, Lafourcade, Nicki Jam, Steve Aoki, Mana and Carlos Vives.

Most 49 categories were published in the non-television section, where they won, among others, Natalia Lafourcade, Fito Paeza, Chico Buarkue, Lenina, Pedro Giraudo and Anaadi.

Mexican Lafourcade received Grammy for the welcome of thousands of immigrants who crossed Central America and Mexico and began to arrive at the US border.

The Mexican band Mana, who was acknowledged as a personality of the year at the Latin Recording Academy on Wednesday, had words of encouragement for immigrants, but the gala did not see other demonstrations of political concern by artists.

An exception was the Brazilian singer Ana Anai, who, when awarded the Noturno Prize, expressed regret that his country "suffers from a neo-fascist threat", speaking of the recent victory of the far right of Jaire Bosonarou in the presidency.