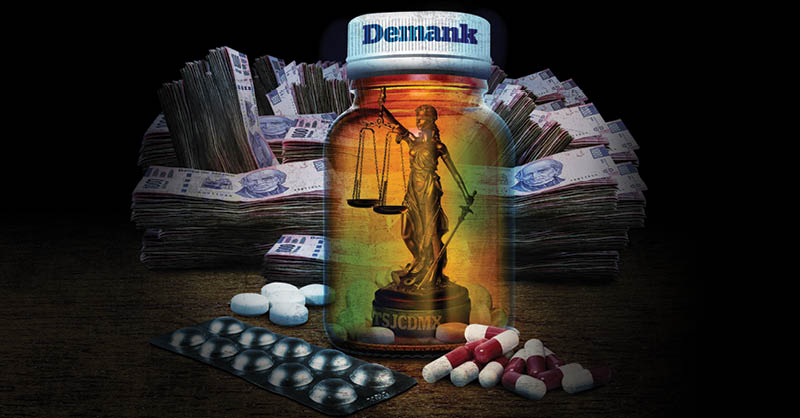 during the pandemic of COVID-19[FEMALE[FEMININE irregularities for overpriced in contracts with the Superior Court of Justice of Mexico City (TSJCDMX) They came to the surface.

Last year, the capital’s highest justice authority awarded a contract worth almost one million pesos to the company Demank Solutions for the purchase of medicines.

However, some of the purchased goods were purchased at a price up to 500 percent more expensive than theirs commercial cost.

In addition, the contract was awarded directly to this company although its specialty is not the provision of medical supplies.

Through the contract TSJCDMX / DERM / 14/2020, the Court purchased 99 different types of medicines and medical supplies, for a total of 849 thousand pesos from Demank Solutions.

The agreement was signed on December 2, 2020 and was in force until the 31st of that month: period of the COVID-19 pandemic where the capital faced the second wave of contagion. However, at least 12 different types of medicines were paid at a surcharge of up to 500 percent, 12.1 percent of the total goods seized.

The contract was awarded directly to Demank Solutions, ie without a public tender that would guarantee the best conditions for the contracting authority of justice.

Up to 500 percent overcharge

The first input the TSJCDMX bought at a premium were toothpaste tubes Clinpro toothpaste of 113 grams, brand 3M.

In total, the court paid 4,569 pesos; each unit was purchased at one thousand 523 pesos although its commercial price at electronic portals of sales such as Amazon and free market is 279 pesos. So the TSJCDMX bought each unit 500 percent more expensive.

Subsequently, 25 boxes of Alkanol with 12 tablets of two milliliters, Bayer brand, at a unit price of 199.13 pesos although Pharmacies Sant Pau sells the same product at 189 pesos, 5 percent cheaper. The court, for the 25 surcharged boxes, paid a total of 4,978 pesos.

Then, for 25 boxes of Advil of 12 tablets, Bayer brand, he paid 5,450 pesos; the agreed unit price was 218 pesos despite the fact that its commercial cost in Farmacias Sant Pau is 49 pesos. The judiciary paid each property 300 percent more expensive.

Subsequently, for 55 jars of solution Ophthalmic alin of five milliliters, a payment of 5 thousand 940 pesos was agreed, each unit had a price of 108 pesos, 50 percent more expensive than its commercial cost than in Pharmacies Sant Pau, which is 71 pesos.

While for 40 boxes of Aspirin of 500 milligrams, Bayer brand, 3 thousand 960 pesos were paid, each unit at 99 pesos, which represents a surcharge of 175 per cent; Walmart costs 36 pesos.

Then for 45 boxes of Bedoyecta Tri 5000 units, with five doses, was paid to the company 21 thousand 375 pesos, a price per unit of 475 pesos; 34 percent more expensive than its commercial cost than in St. Paul Pharmacies is 354.

Then by two tubes of Bephanten, Protective cream of 100 milligrams, Bayer brand, were paid 470 pesos, 235 each, although its commercial cost is 99 pesos in stores like Superama.

On the other hand, for 55 boxes of Broxol of 30 milligrams with 20 tablets, the TSJCDMX covered a payment of 11 thousand 495 pesos; a unit price of 209, 20 percent more expensive than in Farmalisto the cost is 189 pesos.

Also for 10 boxes of Dolac of 10 milligrams 2 thousand 950 pesos were paid; each cost 295 pesos, 64 percent more expensive than at Farmalisto where it is sold at a commercial price of 179 pesos.

Subsequently, 9 thousand 196 pesos were disbursed for 44 boxes of Children’s redox with 100 chewable pills, each cost 209 pesos although its commercial price at Savings Pharmacies is 89 pesos; 134 percent more expensive.

Finally, for two tubes of Bactobran, Ointment of 15 grams, were paid 700 pesos, 350 pesos per unit, 42 percent more expensive than in Savings Pharmacies where it costs 246 pesos.

The company Demank Solutions was contracted by direct award to supply these goods at a surcharge without having experience or that its branch of services specific be the distribution of medical material.

The contract details the company’s turnaround, however, no mention is made of the sale of medicines or equipment Health.

“Its corporate purpose is, among others, the storage, purchase, sale, import, export, marketing, distribution, representation, commission, exploitation, promotion, consignment, intermediation, operation and trade in general as well as the manufacture, maquila and manufacture of products, articles, materials, machinery, equipment, components, parts, goods, raw materials, inputs and services in general all kinds of goods that are manufactured or semi-manufactured, industrialized, finished, or unfinished or in their natural state both wholesale and retail and whether by third parties or on their own account “, explains the statements section of the contract awarded.

You can also read: Superior Court of the CDMX in opacity