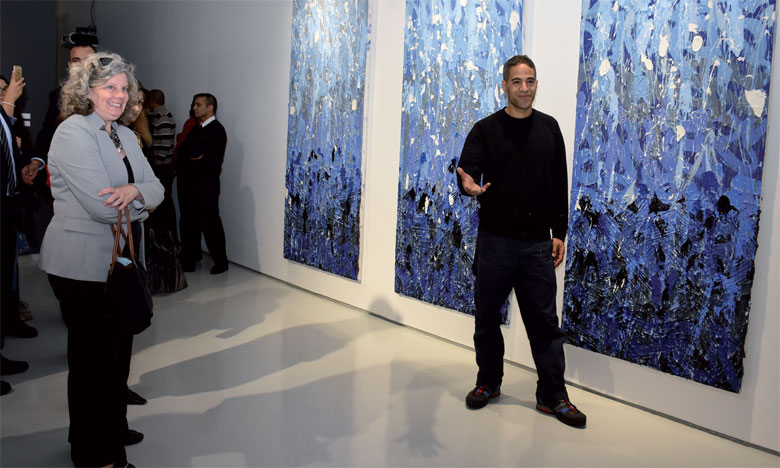 The exhibition of the work of Jonon continues until February 15, 2019.

The Museum of Modern and Contemporary Art Mohammed VI offers an exceptional exhibition until February 15, 2019. The fact that the American artist JonOne, who came specifically to Morocco, at the invitation of the Ministry of Culture and Communication, realized a unique work of 300 m² decorating tower
National Library of the Kingdom of Morocco.

The Mohammed VI Museum has used the opportunity of an American artist Jonon to program an exhibition of his enchanting work under the title "Brighten the Future" with the support of the Montresso Foundation. Indeed, what would be more pleasant than it would have left before imposing a canvas, a lot of life and passion? The crazy world was present on the opening day to find that the work was hanging and had direct contact with the one who made them. A modest young man, with lots of energy and is ready to answer any questions, whether in English, French or Spanish. The artist is equally encouraged by his exposure to Morocco, which he already knows through some artists.
"I am very honored to be doing this exhibition in Morocco, in this great museum. With my work, I want to offer the joy of life, despite the problems that we all have. I struggle with my paintings to find the happiness I am trying to share with people. door and allows me to travel on my head and live intense moments, "says artist JonOne, whose works can be described as energetic, emotional and colorful. His stay in Morocco allowed him to meet some Moroccan artists, such as Mahjoub Ben Ben, and to explore the original encounter between painting from other places, streets and oriental calligraphy. "This exhibition is an opportunity for the Moroccans to discover the works of Jonah, this artist is greatly appreciated in the world." This is a perfect example of how art can save people if you really believe in it. His picturesque dialogue with the Tower of the National Library is a concrete example to say that knowledge and art one. There is visual knowledge and legible knowledge, "said the chairman of the National Museum Foundation, Mehdi Kotbi.
Who could believe that this cousin from Harlem Village in New York, under the name of John Perello, will someday become an artist sought around the world? But it must be said that his beginnings were not very simple. Because he started his art practice on the street, graffitiing his name Jon and his 156th street. Only when he arrived in Paris, he began to paint on the canvas at the Ephemeral Hospital Workshop. His career has so far pointed out in the universe with the most beautiful services in which the issue of urban environments and explosions of norms is returned, through gigantic works whose shape and color are the key words that serve as a means of communication. His work with a lot of hope and enthusiasm is a way to say that life is beautiful and art.