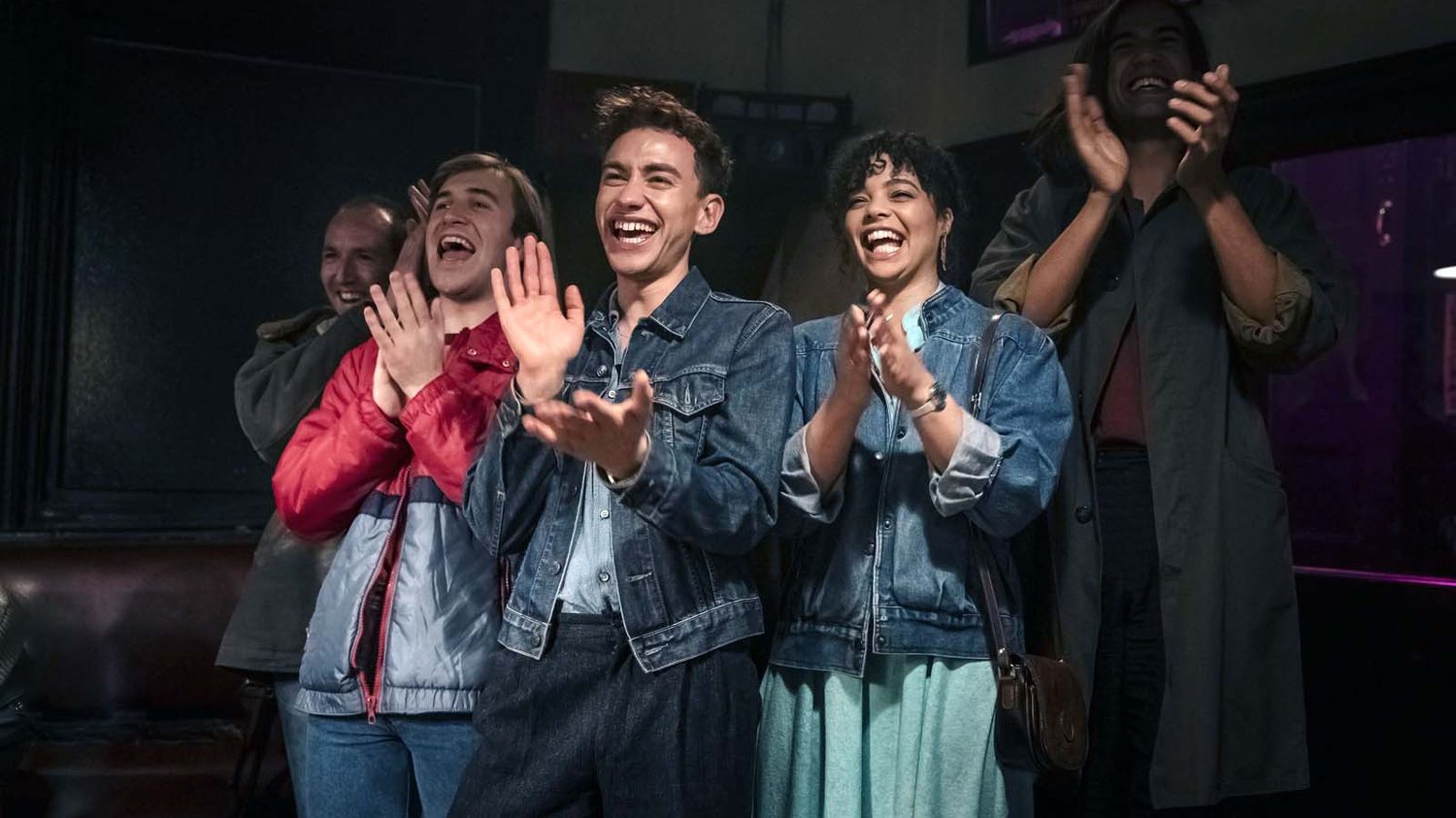 Finally freed from family chains, a group of young homosexuals arrive in London in 1981 and can finally experience their homosexuality in broad daylight. In the wind of sexual liberation mixed with the neglect of the 80s, their lives are marked by the euphoria of the nights at gay parties, friendly and loving discoveries, the first steps in the world of work … They are furious. with people their age, until AIDS stops them from expanding. Quasi-autobiographical creation by Russell T. Davies (Queer as Folk, years and years), It is a sin it’s a real slap in the face. The series, available on Canal + since March 22, resonates with the title Petshop Boys, whose translation is “It’s a Sin,” and makes an ultra-realistic portrait of the beginnings of a devastating epidemic surrounded by shame.

Scenes of pure joy and extreme sadness are linked to a poignant result. “Younger generations grow up unaware of this period”, Explain Russell T. Davies in an interview. Stigmatization of patients, ignorance of the disease or even ineffectiveness of medical treatments … What can we learn It is a sin about the beginnings of the HIV epidemic? Interview with Christophe Martet, editor-in-chief of the LGBT + Komitid media and former president of Act Up-Paris who lived the epidemic up close.

A fair representation of the AIDS explosion in the 1980s?

Tens of thousands of young people who die in a few months, often alone or hidden from their families, is the sad reality it portrays It is a sin. Hardly imaginable events for people who did not live during the time of the epidemic, but quite faithful. “It was a form of killing as we see in the series. You were 25 years old and, if they told you it was HIV-positive, for many that meant you were dead in a year. ”, says Christophe Martet. Of those who caught the virus in the 1980s, only one in ten survived. For Christophe Martet, the variety of routes presented is interesting. On the one hand, there is the lush Roscoe, threatened by his family for being returned to Nigeria for being “exorcised,” the shy Collin, the only child of a single mother who accepts his homosexuality, or the talkative and solar Ritchie, who does everything to hide his identity from parents who don’t want to.

It is a sin it also has the merit of shedding light on a little-known fact: the role of women. Thus, the only girl in the group, Jill, is a constant support for all her friends. “Women were at the forefront, especially in the medical sector, explains Christophe Martet. Because of the stigma surrounding the sick, they took more control of the struggle. “.

Did HIV only affect gay men?

“It would affect homosexuals, Haitians and hemophiliacs. The disease would be directed to the letter H. Who is next? The people of Hartlepool, Hampshire and Hull? ”, Ritchie laughs in episode 2, seeing HIV as a conspiracy. If the virus did not hit the inhabitants of H cities more than others, its concentration in certain populations was very real. Christophe Martet, author of the survey AIDS fighters on the first patient associations, he sheds light on it. “The virus affects and still mostly affects ‘MSM,’ a term used by doctors to refer to men who have sex with men, which also includes biblical men or men who do not refer to themselves as gay.”, informs. But not only.

Vulnerable populations are also concerned about their social situation, their origins or discrimination. Between them, “Intravenous drug users, although today they are much less affected thanks to prevention, people of foreign origin, prostitution, trans …”, according to the journalist. Heterosexual people were much less affected. Same for lesbians “For their less risky practices”, according to Christophe Martet. Today, gay men and having sex with men still account for almost 45% of HIV-positive people according to Public Health France.

Was the gay community so ignorant of the epidemic that it threatened it?

“Seriously, gay cancer. How gay can cancer be? AIDS, do you know what it is? It’s a lab scam “. In a comic scene that portends a future drama, Ritchie refutes the existence of HIV with all possible arguments, taking a risk.

It is a sin it shows disbelief and the difficulty of believing in the epidemic within the gay community of that time. “When you’re twenty, it’s inconceivable to let yourself get hit by an illness in a few months, it’s not in the order of things,” Christophe Martet goes on to explain this phenomenon. Beyond that, “At that time there was very little news, there was no internet or social media, there was no very powerful gay media”, continues the journalist. In addition, the first articles in the mainstream media headlined about a “gay,” hooking cancer “A sulphurous side, scandalous by the disease”, according to Christophe Martet.

Was HIV and STD prevention so weak?

“Don’t go get a girl pregnant” Ritchie’s father warns, delivering a box of condoms to the ship that takes him from his home island of Wight to the mainland. Hilarious, the young man throws them over the railing once his father has his back turned. A scene that raises questions today, at a time when sex education campaigns are targeting college teens and not just reporting on the risks of pregnancy. Did young people not receive prevention against sexually transmitted infections in the 1980s? According to Christophe Martet, the first campaigns aimed at this population and against AIDS took a long time to emerge. In the UK, the first large-scale operation took place in 1986 with the clip “Don’t die of ignorance” which features a reaper and a tombstone.

“This campaign, considered too frightening, was heavily criticized in France, which in turn only suggested the problem.”, says Christophe Martet. For example, the French countryside “AIDS will not pass me by” of 1987 did not mention the condom, which was not as easy to access as it is now. In question: natalist policies in France since the 1920s that forbade the promotion of it. It will take about ten years for the first homosexual campaigns to appear in France. “We considered that AIDS affected homosexuals, drug addicts … It didn’t sell much, politicians didn’t feel worried”, explains the former president of Act-Up Paris.

Were people living with HIV so stigmatized?

There was a real stigma of people contracting AIDS, labeled as gay. In the UK, the “Clause 28” introduced by Margaret Thatcher in 1988 even banned “gay propaganda”. In episode 4, Ash is asked to purge the school library where he works from any literature that promotes homosexuality. This stigma did not come only from politicians. It also came from the medical world. Thus, Gregory (nicknamed “Gloria” in the series) is given a questionnaire to ask if he has “zoophilic practices” in the hospital. Colin, who is infected with HIV, is locked in a room with no access rights. Shocking facts but they did exist, according to Christophe Martet. Many patients lied to their loved ones about the disease affecting them. “Some close friends never told their family, the journalist regrets. They were told they had contracted a tropical disease after a trip. “, keep on.

Were the first treatments so ineffective?

It is a sin shows a gay community devastated by AIDS, and hospital services become dying places. “Before 1987 there was no effective treatment. We relieved patients of the diseases and infections they suffered from AIDS, but we could not stop the progression of the virus in the body. “, explains Christophe Martet. In 1987 comes AZT, which slows the advance of the virus and prolongs life expectancy, but remains very heavy and insufficient to survive. For the Act Up activist, “There has been criminal negligence on the part of governments” which slowed scientific progress. “They have drugs they refuse to make available”, claims a protester about the laboratories of the series. “The epidemic was not treated rationally, there were many moral arguments on the scales”, advances Christophe Martet. 1996 is a pivotal year with the emergence of the first triple therapies that stop virus replication and prevent death, despite very serious side effects in the beginning.

With the evolution of this new class of drugs, a young HIV-positive person in treatment today has a good chance of living as long as he or she was not infected, with a viral load too low to infect others. Current triple therapies are also much better supported by the body. Despite the evolution of treatment and screening, 690,000 people died of AIDS in 2019 according to the latest UNAIDS report and the fight remains very important today. Due to the Covid-19 pandemic, Sidaction president Françoise Barré-Sinoussi deplores “Reduction of 50 to 60% of the projections according to the region” with some “Serious consequences for the epidemic.”