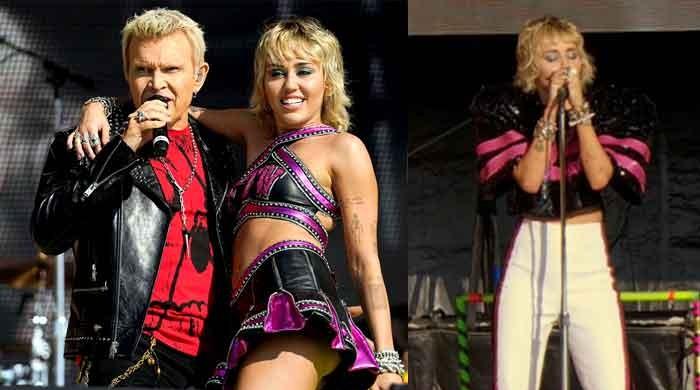 Miley Cyrus got excited when she cheered the audience on with her hit Wrecking Ball during the 2021 Super Bowl hatch concert in Tampa on Sunday.

The pop star cried as she performed her little song to the crowd of vaccinated front-line workers.

The 28-year-old singer also shared her words with the crowd after her performance, saying, “Singing this song, Wrecking Ball about feeling completely broken and shattered … everyone’s suffering is different, even the threshold of everyone’s pain.

Miley Cyrus, who entered the stage in a black and purple cheerleading uniform, began her show with the belt on a cover of Toni Basil’s Hey Mickey, though she changed the lyrics to “Hey Miley “.

‘Hannah Montana’ star also performed her song Prisoner before pop icon Billy Joel accompanied her on stage. Cyrus ’daughter also took a moment to thank the front-line workers in the audience before singing a person from Blondie’s glass heart.

The former Disney star danced on a motorbike before singing ‘Head Like A Hole’, ‘High’, ‘Nothing Breaks Like a Heart’ and a mix of his single ‘Midnight Sky’ with Fleetwood Mac’s Edge of Seventeen.

Miley Cyrus, who had been mocking her prep work for the entire pre-Super Bowl performance, ended her concert with a heartfelt rendition of ‘The Climb’.