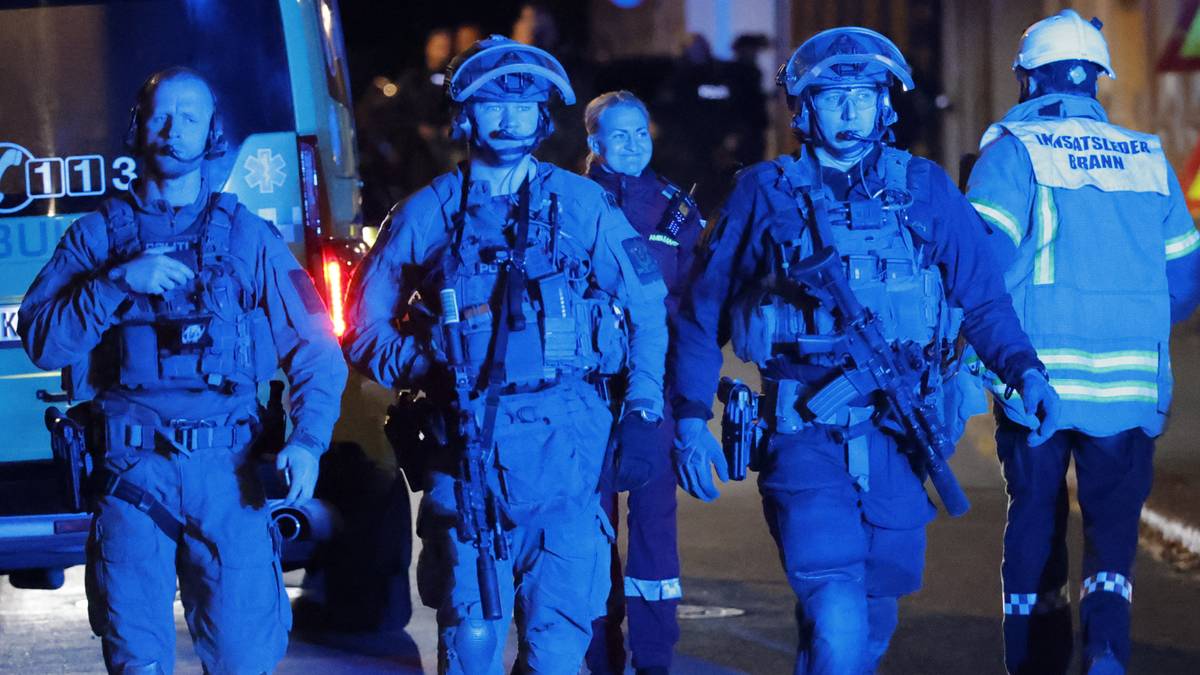 18.13 Police received several messages from people in central Kongsberg that a man was moving through a larger area with a bow and arrow.

– The man was arrested at 6:47 p.m., so it was some time since the first patrol was on the scene until he was arrested, police wrote in a press release.

– Five people died and two were injured. One of the injured is a police officer who was at the scene in his spare time. The two injured are in hospital, according to police inspector Øyvind Aas.

He is currently taking care to go into detail about the victims.

– I cannot enter the age and gender of those who have been murdered. We have to go back. As far as I know, we have alerted relatives, says Aas.

Police are convinced there is a person behind the murders.

Overnight, police say a 30-year-old Danish citizen living in Kongsberg is being charged in the case.

– Police confirm this information about the accused because there are many rumors on social media about possible perpetrators who may not be related to the serious facts, police write in a press release.

– It is explained in detail

At 5 o’clock he came out again.

– He cooperates with the police and explains in detail about the incident, says Neumann.

– How is your condition?

– He is clearly affected by the situation. I don’t think it matters whether he will agree to be arrested or not, Neumann says.

Neumann informs the Danish news agency Ritzau that the accused will be produced for custody on Thursday.

He also says that new interrogations are planned, but that the time has not been decided.

The defender will say nothing about the man’s background. As for the connection with Denmark, Neumann says the mother is Danish, but that she does not know if the man has lived in Denmark and for how long.

– Given the course of events, it is natural to assess whether this is a terrorist incident. The detainee has not been questioned and therefore it is too early to say anything about it related to motivation, says Aas.

It confirms that the author has moved over an extensive area in the center of Kongsberg.

Police are conducting forensic investigations at various crime scenes and have cordoned off large areas of central Kongsberg.

There are also Kripos teams to assist local police in tactical and technical investigations.

Attack on the Coop store

The incidents are related to a Coop Extra shop in the center of Kongsberg (see map at the bottom of the case).

– We can confirm that there has been a serious incident in our store and that none of our employees are physically injured. We are now concerned about tracking down our employees and beyond that we are referring to the police investigation, says Coop communications manager Harald Kristiansen.

– People have been injured in one of the shops where he has been, confirms police chief Øyvind Aas.

Police resources from all over eastern Norway are located in Kongsberg.

The arrested man has been taken into custody in Drammen.

There was a confrontation with the police and the man tried to flee before being arrested.

In connection with this, a warning shot was fired.

Witness: – I closed the door when I got home

Kari Smeby was right at the Coop store just before 6.30pm on Wednesday. She describes it all as “unreal and terrible.”

– I think it’s scary. The first thing I did when I got home was to lock the door. I was scared yesterday, she says.

Smeby came out a little early to do a workout with friends and did a run in the area. He didn’t notice anything unusual, except that the store alarm had gone off.

– There was a police car and an officer in the store. A random passerby said “there must be someone running with a bow and arrow.” I started warming up the workout and didn’t experience anything dramatic then, he says and continues:

– I almost didn’t believe it. He looked completely crazy. I imagined some game teams. It definitely wasn’t.

Finally, he saw a helicopter and many blue lights and understood the gravity of the situation.

– I couldn’t take it for granted. And in the little Kongsberg. says “unreal” is the best word.

PST inside the box

– PST is informed and we are in a close dialogue with the ordinary police. We have no further information now, senior adviser Martin Bernsen told PST.

Kjetil Stormark is a journalist and lives in Kongsberg. He tells NRK that he left after he found out it was a police action.

– There were large police forces acting and actively looking for people trying to control them. There were also police helicopters and 330 Squadron helicopters. It looked like they were using infrared cameras to look at the river bed, Stormark says.