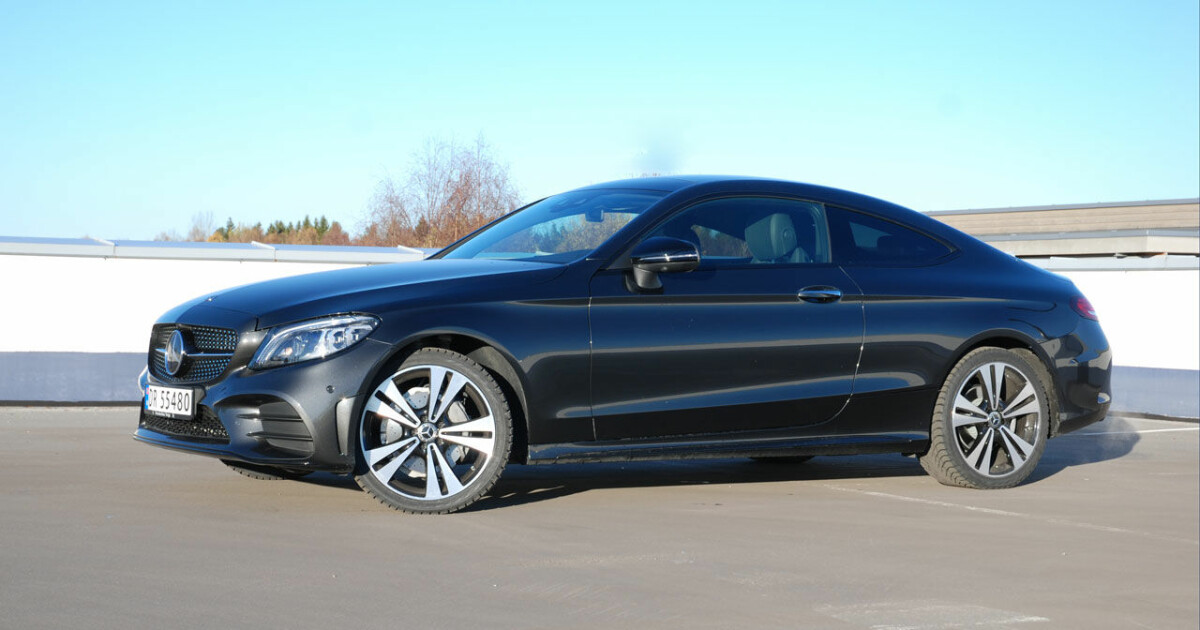 It starts to be a couple of years since all car manufacturers need to have at least one coupe with a two-door release, a blind roofline and some extra effort underneath the lid.

The most popular models have disappeared, but with German premium brands, the coupe stands.

Mercedes is a good example of this. They still have a good bunch of versions in their choice of models. Among them is the C-Class Coupe.

Mercedes has made such a C-Class version for many years. The design was not always suitable to give him great cravings, but today's edition is reversed upside down.

Now this has really become a line-up car, with lots of nice and heavy design elements.

Today's C-Class has returned to the market in 2014. Now it has a design for the face, also on the Coupe edition.

Car manufacturers are often very good at discussing their facelifts and everything that happened with cars in this regard. The C-Class has about 6,500 new and improved parts. New control systems and auxiliary systems come in
from the S-class. There are new LED lights with 84 individually adjustable diode. The lucky control panel is in place, and the C-Class is the only car in this class available with an air suspension.

The test car is called the C200. This means that it has a petrol engine of 1.5 liters with the so-called " A mild hybrid system under the hood. From the engine we talk 184 hp, plus 16 hybrid systems. It sounds quite modest in the car
Like this …

Namely, this is a matter of careful change, but something was not necessary anymore. The C Coupe is a good car and, of course, it is additionally sprinkled with the AMG package both inside and outside. It looks expensive and exclusive
outside.

New raw skin: This will be the cheapest

What are the strengths and weaknesses here?

It was interesting to follow the development of Mercedes design in recent years. It is applied both to the outside and the interior. After a long period of time, Mercedes seemed to think that the star on the front and the traditional brand were enough
In order to keep the competitors there, a lot of things happened.

The car has a much larger factor that must be added, especially in the interior. Today's E-Class was a small revolution when it came. The C-Class also looks completely and exclusively. Here at first glance you have a sense of driving
class, which is supported by noise reduction and comfort.

During the test period, it is not difficult to see that the car also breaks out from the outside. "It was a modern Mercedes, but it cost a million or?" Ask the guy who comes out at the gas station.

The answer is that it simply does not have to be done if you stay on the skin. But as usual in the German premium: it's also possible to spend a lot of money on nice accessories!

The ride is not exactly true as the BMV 4 series (erkerival, along with the Audi A5), but it feels pretty straight and the chassis is raised. The driving position is almost perfect, with very good front seats. 4Matic all-wheel drive
It's gold worth the winter. However, the engine could have more power to support the sporty character of the rest of the car.

It's been a couple of years since we first tested the self-propelling technology of Mercedes, then the E class. He noticed that they later processed it. In this car it works better, among other things, it has fewer and corrective ones
Cowards that initially could have felt uncomfortable.

The back seat is only for adults of about 1.80 meters. Something special about this, especially the height of the ceiling, is what sets limits.

What does it cost?

C class starts today at 470,000 crowns, and then we talk. The purchased edition will give you 507,000 kronor. The automatic transmission is standard, you want a four-wheel drive, it all starts at 560,000. It just does not prevent such a car
this.

However, the test vehicle is much more expensive. After a long list of additions, we end up with 834.715 NOK. But then you get a very well-equipped car.

Who are the competitors?

The BMV 4 series and the Audi A5 are reportedly competing for many of the same customers. The Volkswagen Arteon has four doors and is an outsider in this company. Another outsider comes from the Toiote called GT86. As you realize, it's buzzing
not cars in this class.

Will the neighbor be impressed?

The C-Class Coupe has features that many turn to the car. That this C-Class is suitable for surprise. Mercedes was blinking here.

Naboen will hardly believe what you paid for this

If you are expecting a sports car, there is one thing that comes down: namely, the engine. 1.5 liters is enough, but does not produce excessive excess. 8.4 seconds at 0-100 km / h is also not a time when we allowed us to impress us by 2018
There are many family cars and SUVs that are much faster than this.

A mild hybrid solution is primarily designed to save fuel. The style of driving usually has a lot to say about what you end up in practice, but you're barely almost almost diesel. The official average consumption is 0.67
liter.

The next option is the C300. Then you get a 2-liter gasoline engine of 258 hp. This is considerably faster and makes 0-100 km / h of 6 seconds empty. The difference in price is only a few thousand valves, but you do not get this with a four-wheel drive.
Then you have to choose what is most important.

In addition, the C-Class Coupe is a very nice acquaintance. Here, Mercedes delivers goods at a level to be expected (but not always) of them. The car is made modern, interior and exterior. The interior is high
quality feeling, and at the same time packing with both important safety equipment and things that are "nice to have."