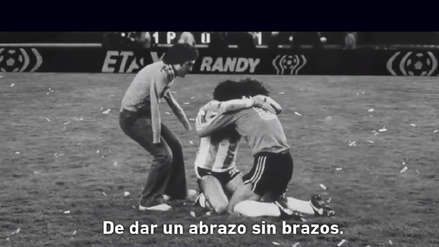 "Inexplicable things happen with Argentines, enjoy Superfinal America." The Argentine Football Association (AFA) has launched a video for the promotion of Superfinal Copa Libertadores, who, as protagonists, will be the most popular teams in that country: Boca Juniors and River Plate. It is a place full of emotions and passions.

Despite the fact that the video lasts only 27 seconds, this summary is part of the history of Argentine football, where it is said that they have two best players in the world (Diego Maradona and Lionel Messi), but not just that. They also mention the fact that they have five presidents in a week or a Pope born in Argentina. Inexplicable, right? "Do not try to explain it, you live," says AFA president at the end.

But one thing is that they tell you, but the other is that you see it yourself. Here we leave you a video that AFA launched the Copa Libertadores finals, where on Saturday, November 10, Gonzalo Piti Martinez and Dario Pipa Benedetto will play two players.

Boca Juniors River Plate: Marcelo Gallardo has defined where he will see the Copa Libertadores final

Boca Juniors River Plate: the date, time and finals of Copa Libertadores in 2018

Boca Juniors River Plate: How is the record between both teams in Copa Libertadores?

Boca Juniors River Plate: the double of their goals in the statistics