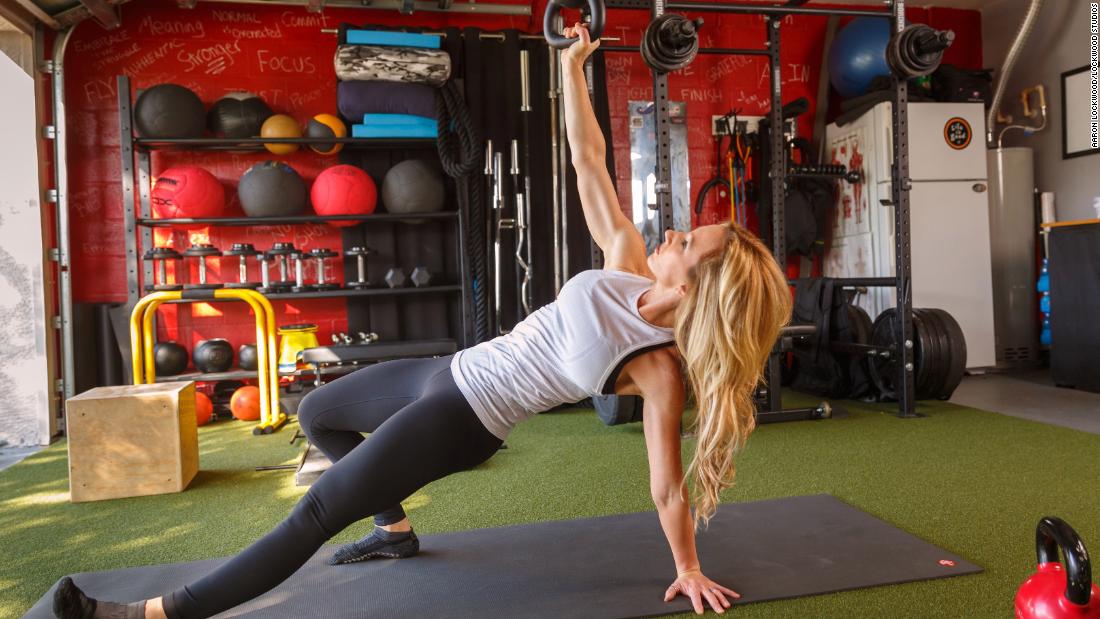 Recent study reveals a new cause of anorexia 2:14

Editor’s note: Dana Santes, known as the “Creator of Mobility”, is a certified specialist in strength and conditioning and body and mind trainer in professional sports. He is the author of the book “Practical Solutions to Relieve Back Pain.”

(CNN) – If you are middle-aged and have been gaining weight slowly but steadily for years, you are probably attributing it to an age-related decrease in metabolism.
The metabolic rate is the rate at which the body burns calories to stay alive and functioning. It is a generally accepted belief that as we age, our metabolism at rest slows down, especially from the age of 40 onwards. And if you’re a menopausal woman, your metabolism slows down even more.

But this is not true, according to a new article published in Science. Analyzing the data of almost 6,500 people aged between childhood and old age, the authors of the article determined that the metabolism at rest remains stable between 20 and 60 years, and that since then it registers a decrease of less than 1% per year.

Furthermore, contrary to conventional wisdom, the paper does not cite real differences between the resting metabolic rates of men and women, even in the case of menopausal women, when other factors are controlled.

You may be wondering then why you feel your metabolism has become slower.

The answer has less to do with age and more to do with lifestyle. Although your reference metabolic rate at rest may not have changed between the ages of 20 and 60, the factors that drive other aspects of your metabolism, when not at rest, may have changed, decreasing your ability to metabolize. fat, maximize calorie burning from exercise, increase muscle mass that burns energy and get quality rest to allow metabolic processes.

Don’t worry, this is not bad news. It actually means that you have the power to make changes that will boost your metabolism, regardless of your age.

Read on for four science-supported ways to boost your metabolism.

Important Note: Consult your doctor before beginning any exercise program.

Stay active during the day

When wondering why you feel that your metabolism has become slower with age, you should also ask yourself if your daily activity level has slowed down. In addition to all the other health risks associated with sitting for a long time, experts point out that constant inactivity is the biggest harm to metabolism.

“Being sedentary most of the day significantly reduces fat metabolism,” says Edward Coyle, a professor of Kinesiology and Health Education at the University of Texas at Austin.

Fat metabolism refers to the type of fuel that is burned during resting metabolism.

Coyle, who is also the director of the university’s Human Performance Lab, said his research found that at least 8,500 steps a day should be taken, throughout the day, instead of all at once, to maintain proper fat metabolism.

In addition, in his lab, Coyle found that with just five bursts of four seconds of exercise performed at maximum effort every hour throughout the day they can dramatically increase fat metabolism by up to 49%.

Although doing 20 seconds of full sprints every hour is not practical for almost anyone, sedentary office workers the limitations of time and responsibilities make it difficult to go to the gym regularly should encourage them to get up and move a few minutes per hour. , as it can bring them significant benefits.

Do the right kind of exercise

High-intensity interval training (HIIT) and strength training have been shown to have statistically significant effects on metabolism.

HIIT is a training style that involves periods of intense exercise with a high heart rate alternating with periods of recovery. It has been shown to raise the metabolic rate, specifically for fat burning, long after you finish your workout. One study found that after 12 weeks of HIIT, overweight men reduced their abdominal fat by 17% and overall fat mass by 2 pounds, which is comparatively more than other studies on fat burning using alternative forms of exercise. You can learn more about how to perform HIIT safely here.

5 exercises for those who spend a lot of time sitting 9:15

With strength training, you increase your body muscle mass, which increases your overall metabolic rate. Like HIIT, this means you burn more calories after exercise. However, unlike HIT, the muscle you build with strength training will continue to burn caloric energy regardless of how often you exercise, as long as you do enough to maintain muscle mass.

Therefore, strength training can also help you avoid muscle loss and the metabolic decrease associated with weight loss diets. In a study of 48 overweight women who followed a diet of only 800 calories a day, it was shown that strength training allowed them to maintain muscle mass and metabolism, while study participants who only they were doing aerobic exercise or not exercising they were losing muscle and experiencing a decrease in metabolism.

To maximize your metabolic boost through exercise, you should vary your weekly workout program to include both strength training sessions and HIIT training sessions. That said, it’s important to keep in mind that to get the most out of any type of exercise program, you also need to break long periods of sedentary time during the day with brief episodes of activity, as mentioned above.

Doing an hour-long workout would normally increase your fat metabolism, Coyle said. But if you’ve been inactive all day, it won’t be as effective because of what he called “exercise resistance”.

Coyle’s research shows that people who are inactive all day become resistant to some of the beneficial effects of exercise, particularly fat metabolism.

This is why it is crucial to do stretches of activity throughout the day, in addition to performing longer workouts.

Fill your body with protein and water

The digestion of food increases metabolism for a few hours, as caloric energy is used to process the ingested nutrients. This is called the thermal effect of food (TEF).

This is not to say that you should eat more to increase your metabolism, but if you eat more protein, this can lead to a greater increase in metabolism than other foods. This is because protein causes the largest increase in TEF, increasing your overall metabolic rate by 15% to 30%.

Eating protein is also essential for building and repairing muscles, which, as stated above, boosts your metabolism. In addition, protein intake helps you avoid muscle loss and the consequent decrease in metabolism that can occur with diets.

Registered dietitian and owner of Eleat Sports Nutrition, Angie Asche, author of the book “Fuel Your Body: How to Cook and Eat for Peak Performance,” advises eating between 20 and 25 grams of protein an hour after exercise.

This equates to an 85-gram chicken breast (24 grams of protein), a 200-gram container of 2% Greek yogurt (20 grams), or a tablespoon of whey or powdered vegetable protein. protein vary by brand).

Drinking more water can also briefly increase your metabolism. Research shows that drinking 0.5 liters of water can increase resting metabolism by 24% for about an hour. Other research points to a possible increase in metabolism if you drink cold water due to the energy expenditure needed to heat it to body temperature.

Sleep is crucial for the recovery and restoration of all the processes in your body.

Sleeping less than seven hours is usually associated with numerous negative health implications, such as weight gain, diabetes, hypertension, heart disease and stroke, depression, impaired immune function, and increased pain, impaired performance, and an increased risk of death, according to the American Academy of Sleep Medicine and the Sleep Research Society.

When it comes to the harmful effects of lack of sleep on bodily processes, metabolism is no exception. Research has shown that deprivation and reduced sleep quality have a detrimental impact on metabolism.

The U.S. Centers for Disease Control and Prevention (CDC) reports that 1 in 3 Americans do not sleep the recommended seven or more hours per night. To get enough sleep to maintain a healthy metabolism and overall health and well-being, it’s important to create a nightly routine that includes rest-facilitating strategies, such as breathing exercises to help calm the nervous system. You can also practice these four yoga movements to prepare your body before bed.

Research suggests that the pace of your metabolism, especially that of fats, is largely in your hands. It’s up to you to make changes in your lifestyle that boost your metabolism and your overall health and well-being.