Contract on the last metro section was signed. It will be ready in four years 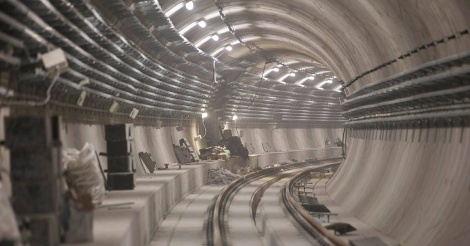 The City Hall signed a contract for the construction of the last part of the II metro line in Bemovo. For four years, three new subway stations and technical-parking stations will be ready at the Warsaw border. The contractor will receive over 1.6 billion zlotys for this.

The Bemova part of the second metro line will be designed and built by the Turkish-Italian consortium Gulermak and Astaldi. The tender was decided in Junehowever, his result was challenged by the Chinese company Sinohidro Corporation Limited, whose offer was lost. – According to them, there is a presumption that Astals should be excluded from the procedure because of the financial situation. They demand the annulment of the Astaldi selection process and the creation of an examination and evaluation of bids, "Anna Baron, spokeswoman of the Warsaw Metro explained to us in October.

The appeal was dismissed by the National Appeals Chamber, which gave the city hall a green light for signing the contract.

Within this part of the investment, it is necessary to drill more than four kilometers of tunnels, two for each direction. In addition, three stations will be located in the section: C03 Lazurova (on the south side of Gorczevska Street, near Lazurova St.), C02 Chrzanov (near the intersection Szeligovska St. with the planned extension of Człuchovska St.) and C01 Karolin (at ul. Sochaczewska and Połczinska).

At the end of September, the name of the last station was changed by the Council for the Nomenclature of the Warsaw Council. Previously, it was called Połczinska. Similar to the technical parking lot. In the beginning it was called Mori, but it was also eventually marked as Carolin. Both decisions must still be approved by the councilor's office.

Thanks to the construction of STP Karolina, trains on the second metro line will be able to use the frequency – approximately every three minutes. The extension of the metro to Bemovo would facilitate communication mainly for the residents of Jelonek and Chrzanov.

"We are aware of great expectations"

The Turkish-Italian Consortium ensures that it is able to meet the requirements of the contract within the prescribed deadline. We remind you that lately there have been reports Astaldi financial problems. The portal about tvn24bis.pl has been written several times on this topic.

– This contract is a really prestigious investment for us. Once again, we want to show Varsovci that Gulermak Agir Sanaii Insaat ve Taahhut A.S. and Astaldi S.p.A. is a guarantee of timely and effective execution of the contract. We are aware of the high expectations of the inhabitants, which is why the implementation of these projects was preceded by careful preparation. We are aware of the challenges that require us to experience, but also the proven team of employees. I can assure you that we have both, "said Bulent Ozdemir, a representative of the consortium.

A contract was also concluded for the extension of the second line of the Metro to Brodno. Astaldi is a member of the consortium headed by Gulermak. Works on the implementation of this contract started immediately after signing.

In turn, the city continues to sign the contract for the extension of the metro to the stations Ulrichov and Povstancov Slaskich. The episodes will also be built by the Gulermak consortium and Astaldi.

The City Assembly assumes that the entire second metro line will be completed by 2023.