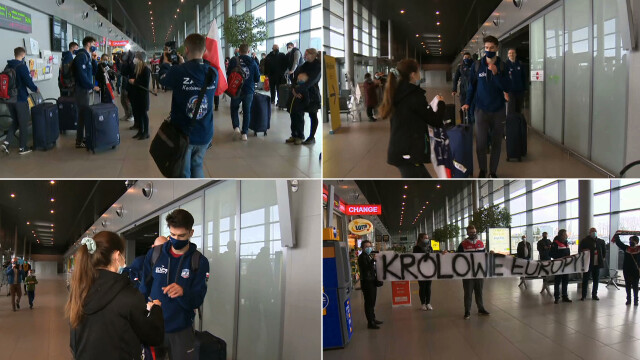 The Polish team defeated Itas Trentino in the final by 3: 1. Due to the pandemic, the fans could not sit in the stands of the Verona lobby. ZAKSA fans who wanted to celebrate their great success along with the players had to be patient.

The first fans have already appeared at Pyrzowice Airport. A total of several dozen people waited for the players.

Volleyball players landed around 12.30, were greeted at the terminal with a banner with the words “Kings of Europe”. Although they were clearly tired, they found a moment to sign some autographs and talk to reporters.

In Kędzierzyn you can expect larger crowds. Fans will have to wait for the players of Hala Azoty, where the team plays matches every day. The team is supposed to be there between 2 and 3 p.m.

This season, the Kędzierzyn team won almost everything that could be won; apart from winning the Champions League, he also won the Polish Super Cup and the Polish Cup. Only the championship was missing, in the league final ZAKSA lost against Jastrzębski Węgl.

The official end-of-season celebration will take place on May 4th. The team will then travel the streets of the city in a special bus.

The second Polish triumph of this kind

The only Polish team that could boast of being the best in Europe before is Płomień Sosnowiec (Milowice). In 1978 he won the Champions Cup, which is the predecessor of the current Champions League.