The cello could not carry spare chains on the plane 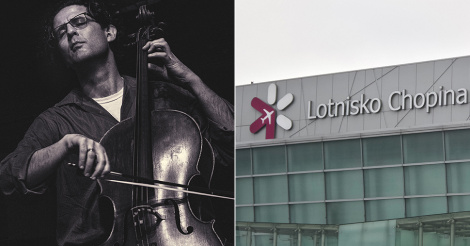 There was an unusual situation in the Warsaw Chopin airport. The famous cello, Amit Peled, has forbidden to carry a set of spare chains in the plane. "We treat security issues as a priority," explains the airport representative.

"At the Warsaw airport, for the first time in my life, they pushed me away from all the chains, and stated that bringing them on board was too dangerous," he said in an email to Classic Radio FM Amit Peled.

"I always have spare ropes with me and I've never asked them to give them a new life. Well, at least I have not been deprived of a cello about the accusation of being able to say goodbye to someone with one foot, "added the musician.

All in accordance with the regulations

Piotr Rudzki, from the Public Relations Department of Chopin Airport, confirms that this happened. "The operator of the control of screening of the passenger's baggage stated that there are cello strings, which, due to their properties – in accordance with the regulations – are classified as prohibited articles "- we read by email to the editor.

"The security control operator, after questioning the possibility of carrying cello chains on board, repeatedly proposed to the passenger that he put them in checked baggage, that the passenger was not in agreement," explains the representative of the airport.

"Security is a priority"

"We are very sorry that this situation occurs at our airport, but we treat security issues as a priority," Rudzki concluded.

Amit Peled was invited to the Krzysztof Penderecki Festival. He played the Cello Concert II during the inaugural concert. The program of the festival, totally prepared by Elżbieta Penderecka, had ten concerts, including seven symphonic concerts and three chambers.

See also how we reported about the expansion of the Chopin airport: