The end of the police protest. There is an agreement between the head of the Ministry of Internal Affairs and administration and trade unions 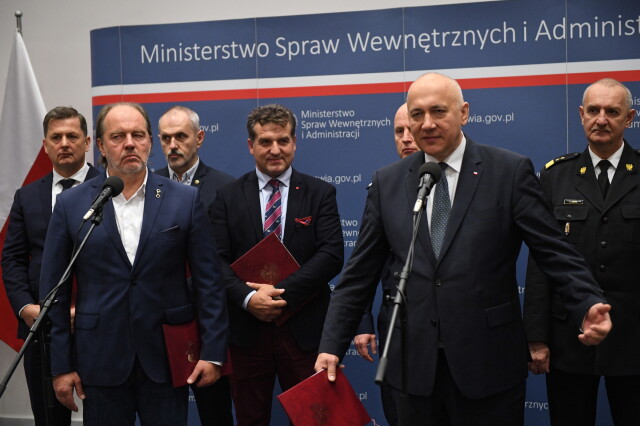 The police officers' unions have agreed with the Ministry of Internal Affairs and Administration – the head of the NESZ police department, Rafał Jankovski, informed on Thursday evening. As he said, this means the end of the protest. Interior Minister Joachim Brudzinski added that thanks to the agreement, police officers are returning to work. "I regret the quickest possible return to work," he said.

The talks lasted almost ten hours. In the evening, the President of the NISZ Police Chief Rafał Jankovski and the Minister of the Interior and Administration Joachim Brudzinski informed about the conclusion of the agreement. As they emphasized, the protest of uniformed services ends.

There is a protest …

– I would like to inform you that today on behalf of the Union of Uniformed Unions we end our protest campaign. This agreement is so pleased that we have just stopped the protest and we are returning to service, "Jankovski said.

– Today, when I cross the threshold in the Ministry of Internal Affairs and Administration, I did not have much hope that I would have an agreement at noon, "he said.

According to the head of police officers of the NES, the initialed document is "the best agreement that has been agreed upon". As he noted, it is not perfect and it wants to be better.

– However, I think this is a turning point in the relations of the social side with the Minister – added Jankovski.

"It seems to me that we started this real and real dialogue today," he continued. "I do not remember the moment when the social side signed an agreement that is so good for thousands of Polish officers," he said.

– This is not even a step in the right direction – now we intend to improve the quality of service, salary of Polish officers – he said. He also expressed the hope that officials who appear to the minister of services will get acquainted with the agreement in a few moments and be satisfied with it.

The Minister thanks "for this long dialogue"

The head of the Ministry of Internal Affairs and Administration, Joachim Brudzinski, began thanks to the "social side for this long dialogue".

– The speaker is right (Rafał Jankovski-ed.) He noticed that this was not just a step, but a good direction for the complete process of modernizing uniform services – he said.

– The process begun by my predecessor, which I would like to thank, Minister Mariusz Błaszczak, – he added.

– But the most efficient interior minister and most suitable for dialogue would do nothing if he did not have the kindness, readiness and openness to apply the real postulates of officers and uniformed services by the prime minister. And I would like to thank Prime Minister Mateusz Moraviecki in a special way – Brudzinski emphasized.

He also appealed to the officers who participated and the protest to return to service as soon as possible.

Details of the agreement

In addition, the overtime work, which the police have not paid so far – will be paid a hundred percent.

In addition, full-time police officers may be able to remain in service, taking into account half of the hypothetical pension.

The signing of the agreement was posted on the Twitter police profile of the Polish police, publishing photos of that document.

The conclusion of the Agreement ends the protest, which is mutually agreed by all parties.
From 1 January 2019, PLN 655.-
From January 1, 2020, not less than 500 PLN.
Right to retire after 25 years of service (no requirement of 55 years of age).
100% paid overtime.
Another law on modernization. pic.tvitter.com / MSlR4FK4KSV

Mass medical examinations in the police

On Wednesday, about medical exemptions to which police officers were in the form of unofficial protests, there was already one-third of the officers. More than 30,000 people.

The information was confirmed by the spokesman of the Chief Police Commander Mariusz Ciarka.

He said that "the situation is dynamic, but we are talking about a very serious number of police officers at the surplus." "I do not know, or even about one-third of the full-time Polish police status," he said.

Protest of the officer

The police protest, joined by members of the border police, prison services, State Fire Service and Customs and Tax Services, began in July.

The action was so broad that budget revenues from the seat fell by as much as 90 percent.

In response, the Ministry of Internal Affairs and Administration submitted an offer, which consisted of an increase of 550 PLN. However, the main board of the only police union declined the offer and organized the largest demonstrations in history, which gathered from 20,000 to 30,000 police officers on the streets of Warsaw. Earlier, police officers were even more aggressive – by organizing news about instant messengers and on-line forums – the mass departure of a doctor after shifting.