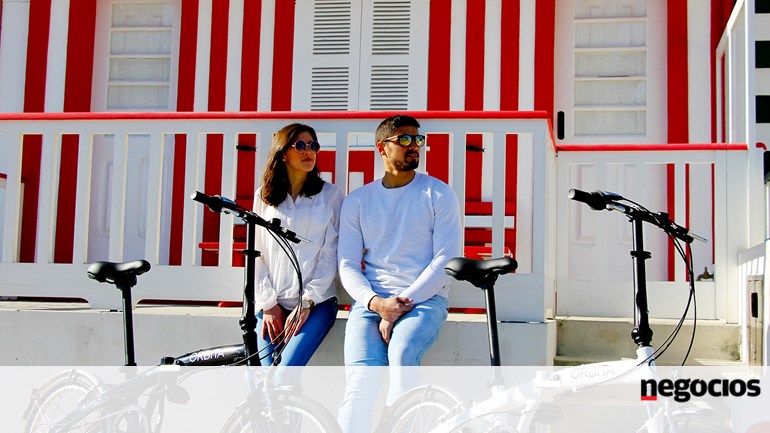 The Portuguese born in the seventies have to remember Orbita, which was for many of them the brand of their first bicycle.

With a name inspired by the first satellite sent to Mars successfully, the company was born in 1971 as a result of the decision of Miralago, the parent company, founded in 1956, which began producing pine nuts and racks, products that in those moments were not produced in Portugal.

"I thought there should be a company that produced the entire motorcycle, preventing a foreign company from doing the work in which we participated: manufacture, assemble and distribute," recalled Aurélio Ferreira, the entrepreneur who sold Miralago / Orbit in 2015, in an interview, the previous year, in the SUCEO.pt program, of SIC Notícias.

However, with the arrival of Asian competition, in the years 1990 and 2000, Orbit had to give the pedal not to fall.

Until 2012, it occupies a leading position in the "Sustainable sustainable mobility" area in Portugal, with the complete provision of 220 bicycles and 38 parks for the largest project on the date of bicycle sharing – Vilamoura Public Bikes.

During this year, it also guaranteed the provision of 150 electric bicycles for the postal postal distribution project of the CTT throughout the country.

The following year, in the shared bicycles system, he won the supply to the city of Viseu, and in 2014 in Vila do Conde, which is present in other cities, such as the birthplace of Agueda , Oliveira de Azeméis or Bragança.

Before, in 2011, his client in France granted him the placement of 22,000 electric bicycles on the streets of Paris. At the moment, at international level, Orbit also pedals to many other cities of countries like Spain, Austria or Slovenia.

Arrived in 2015, without seeing any person in the family to continue the company, Aurélio Ferreira, after 85 years, decided to sell Orbita-Miralago group.

The new administration of the group, the owners Jorge Santiago and Nuno Silva, assumes their position on September 4, 2015 and, a year later, wins a kind of "Euromilhões" throughout the country: Orbit wins the Tour competition, the shared bicycle system of Lisbon: a contract worth 23 million euros, with the validity of eight years.

But this Wednesday, April 10, EMEL, a municipal company that besides parking in Lisbon also manages the Gira network, announced the end of the contract with Orbit alleging "successive contractual violations" since December of 2017, which resulted in penalties of 5.25 million euros, corresponding to 20% of the total value of the contract, the maximum limit established by public procurement for the execution of this type of sanctions.

According to EMEL, of the 140 stations that were currently operating, the Gira network only has 92, of which 74 are in operation, 15 are installed but do not have bicycles and three do not work due to the lack of components.

At the bicycle level, in March, the Gira network had an average of 500 bicycles, of which 200 were electric, when the number of contracts was 624 electric bicycles and 311 conventional bicycles, which totaled 935 bicycles.

EMEL guarantees that Orbit has squandered the various opportunities that it has given to comply with the contractor, after having delivered it to the hour, he assured, in order to establish the The alleged entry of a new shareholder, which never happened.

With the end of the contract with Orbit, EMEL announced the launch of a new contest for the "expansion, operation and maintenance" of the Gira network, which provides "up to a total of 3,500 bicycles, 80% of which They are electric, and up to 350 stations, for a maximum period of eight years. "

"It's not accidental to do anything"

The next day, in a statement, Orbit expressed a "big surprise" to the announcement of the end of the EMEL contract and recognized "that there are problems in the realization of the Gira project and in the Its operation, "warned that" never "would accept" to be the head of a problem in Turkish that has more responsibility and is more complex than it seems.

For Business, Orbit's chairman said that by late afternoon this Friday, April 12, he had not yet received any formal communication from EMEL about the ending of the contract.

"They publicly denounced that they were going to terminate, but they did not terminate – I have nothing on the table," responded Jorge Santiago.

Therefore, it has rejected the challenge of responding to the claims of the municipal company of Lisbon for the termination of the contract. "I can not advance anything, I can not decide anything until I have a document. It's no coincidence that everything is done," he said.

The problems of the GIRA network, since the end of 2017, have denounced the problematic situation in which the Miralago / Orbit group is.

After three months without receiving wages at the beginning of this month, about 50 Orbit workers sent letters that canceled the contract to the company, while the union of the sector expressed concern about the Lack of work in the company because it did not even have machinery the effect.

"It is not true, we have a lot of work," said the president of Orbita, still in business statements. "But I can not say more about this, otherwise I will question the solution I have to EMEL," he said, assuring that he has "about 15 people working in the company."

The business is on the way to bankruptcy? "No, at all," said Jorge Santiago, although he acknowledged that the group that leads has "accumulated losses," adding that "the turnover last year was four million euros" , against "seven million dollars". the previous year. "

The general secretary of the organization, who was contacted by the National Association of Two Motorcycle Industries, Furniture and Related Companies (Abimota), stated that "the Orbit situation, and without a deep knowledge of the subject, It seems to us that it results from some vicissitudes of companies in which the approach adopted was not achieved as planned

For Gil Nadais, "sometimes there are great projects that are great problems", referring to the impact of the Orbit Tour. "The Lisbon project, as it was done, required a financial leverage that was not properly dimensioned," said the leader of Abimota.

However, there are already creditors who request the Miralago / Orbit judicial administration. This is the case of Forjaço, a company of Anadia, who has already asked for the court for the insolvency of the manufacturer of Águeda bicycles.

"Yes, it is true", confirmed the official source of Forjaço, which, without wanting to advance more information on this topic, has always been saying that "there are worse situations", referring to loans from other creditors Miralago / Orbit

According to Eurostat data, in 2016 Portugal was the largest exporter of bicycles in Europe, after having passed the second place the following year: lost the title of European champion for bleeding after having exported 1.73 million bicycles in 2017. , just behind 1.76 million from Italy.

Spain, France and Italy are, by far, the main markets for Portuguese bicycles, which have absorbed about 80% of what is produced in our country.

And in Portugal is the largest bicycle assembly in Europe. Vides in Vila Nova de Gaia, called RTE Bikes, employs 700 people and produces about 1.4 million units per year, after 95% for export.

Despite having the largest bicycle factory, Portugal is outside the European podium in the world "ranking".

"Portugal occupies a leadership position in the production of bicycles, however, it is not in the lowest segment of the market, nor is it at its highest point, although its scale continues to increase", he stressed the general secretary of Abimota.

"In these circumstances, Portugal has a large number of bicycles, the fourth European mounter, which is still not equal to the level of the ranking, with that of value, but we are climbing, and we are sure that by the end of this year 2019, With the great bet that is made in the assembly of electric bicycles, we will have a stronger position in the value component, "emphasized Gil Nadais.

According to this association official, the two-wheeled sector in Portugal has "more than two dozen companies and more than seven thousand workers."

However, the bicycle Portuguese industry, which "already had affirmed" in terms of quality, is being tested by its productive capacity "and" responds favorably with regard to the quantity of bicycles and manufactured components "said the leader of Abimota.

The recent European regulations on electric bicycles, as well as the introduction of anti-dumping duties, "have promoted a greater demand for electric bicycles that are highly demanded in Europe and that they are a vehicle of choice for the advantages they bring, health and decarbonization of the cities, "he said.

With the national bicycles industry at high speeds, Gil Nadais accuses the government of preventing the industry from having the same dynamics in the national market: "It is a pity that the political disruption in Portugal between the different ministries does not allow us to bring it closer. We from other European countries and keep a small Portuguese market. "