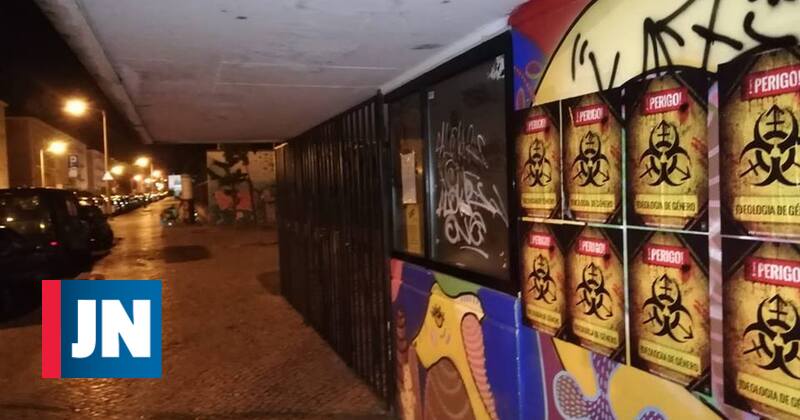 The organization "Escudo Identitario", created in 2017, has expanded over 1,000 posters in around 300 schools in the country, against what it calls "gender ideology," warning of the "danger" it does. He denies fascism and extremism attributed to them.

"We are fighting for social protection, Portuguese sovereignty and identity, but also for traditional European values." In capital letters, just as it is copied. This describes the "Identity Shield" on Facebook, which says "patriot" and "impartial" and where it publishes some of the actions it does.

Contacted by JN, the Central Commission for the Protection of Identities explained in a written reply by email that she was born of the need to create a "metapolitical movement that overcame the old and stupid right-wing left dichotomy and fought for common ideals" for the Portuguese and European people. Today there are more than 200 young people – mostly men, but there are women – across the country. They say they are fighting "the world of nihilism, hedonism and apathy".

The last action the group posted-and which caused a wave of criticism on the Internet-was held last week and consisted of more than 1,000 posters against the so-called. "gender ideologies" in more than 300 schools Porto, Gaia, Lisbon, Montijo, Almada, Cascais, Oeiras, Loures and Faro. "We know schools around the world convey their ideas, and the main propagators of these absurdities are afraid of open, free and rational debates, because they know that their ideas do not last for two seconds under control," the Commission says.

But what is the "gender ideology" that the group is talking about and written on the posters on school walls? That is, the group responds, the idea that "sex and gender are different and unrelated." In addition to not recognizing "any sense" in the assumption – that the Portuguese law recognizes – it says that it has no scientific support.

And who are they, "enlightened"? "As a rule, they are academics who justify their positions with absurd and unreasonable theories", imported from the United States, "at a time when even these progressive movements are completely retiring," the group said. "As soon as there was a free debate on these issues, the card house fell, and that's what we want to do in Portugal."

We are neither fascists nor extremists, we are young Portuguese who are fighting for our ideals

The purpose of this action was to explain the "Identity Shield" to challenge the debate, to avoid the taboo and attract more people to the organization's site. Two points on the agenda were achieved, but the public response had few positive views. There were many critical voices that came, and some are thinking about the practices of the "fascist" and "extremist". "Shield" answers not to be considered by the words: "The only lesson that is taken from these criticisms is intellectual laziness. Instead of creating solid and well-founded arguments (the people who criticize) prefer to resort to ad-homin 'delusions, we are neither fascists nor extremists, we are Portuguese youth who are fighting for our ideals. "

Despite the threats they claim to receive – "just today, we have been threatened more than 10 times" – they say that intimidation attempts have the opposite effect. "We see this as a signal that we are doing something right. We fight against the Status of Kuo, we are killing an elite who considered herself sovereign in that country and thought that there was no opposition. We are dealing with this with certainty that this is the way regardless of the threat, we will never reduce our hands. "

The law recognizes the right to self-determination and prohibits discrimination

JN recalls that it is Collage collage in public buildingsipunishable by law (an exception for political content and publicity), with the application of fines. The law has established that although municipalities are responsible for issuing posting licenses in places previously identified by the applicant, "interventions that decarcate, alter, collapse or smear the external and internal appearance of monuments, public buildings, religious, public interest and historical or artistic value (…) ".

In the near future, the group has scheduled an economy conference in Oporto for the next 17th and celebrations of the renewal of independence in Lisbon during the December 1 vacation.