Not everything that shines on the Internet exists 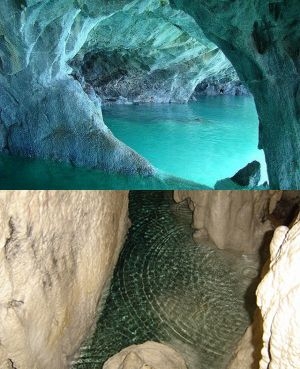 The Internet can often be useful for planning a vacation or hiking, but obviously not always. This is what I learned on my own, when one Sunday in May, along with several friends, I decided to explore a cave I had found on the net.

It is announced that the Emerald Cave is a unique experience, but not in vain was nicknamed in the articles “the miracle of Valcea”. According to instructions received online, one day seemed enough, if we leave in the morning at one.

This is what I did. We arrive at the village of Valea Cheii, from where we take him to the Iezer hermitage. From there, the Internet told us we had about two miles to get to the magical path that leads to the miraculous cave.

Since I couldn’t find the way, I asked the hermitage. A very kind nun briefly told us, “It doesn’t exist!”. We insisted, as if miracles existed like images. The nun looked at us gently and, after a moment of exploring her memory, explained to us once again, “It’s … how can I tell you in worldly language … itch!” .

A little excited, but still optimistic, we tried our luck with other locals, including Forest District employees. Invariably we came across the same answer: the Emerald Cave does not really exist.

As you can see, however, on the net the miracle is alive, spectacular and described so real that you don’t know what to believe.

Here’s how the “emerald cave” looks

So I turned to specialists. I called the speleologist Cristian Lascu, former editor-in-chief of National Geographic, author of numerous books and works on the ground and who discovered and explored countless caves throughout his career. This time luck smiled on me and I was right next to Florin Stoican, who built the Buila-Vanturarita National Park, so he is, as Mr. Lascu told me, “the number 1 expert in the whole area to stay “. And in a few minutes the mystery was solved.

“It’s actually the lake cave. Someone promoted it under the name Emerald Cave, they put pictures of other caves, which aren’t even from Romania, and they created a myth that way.” , Cristian Lascu explained to me.

The real cave is interesting, but if you expect to find what you saw in the fake images, you might be disappointed.

“It’s interesting, with a narrow, deep lake, and it’s quite sporty, that is, you fall slightly into the water. You have to be a bit of a climber, because you have to take a walk, walk like that, with your feet on the walls. and, if you don’t have enough strength, they escape and fall into that water which is very cold and quite deep … about 2-3 meters “, added Lascu, specifying that in the dry season the water of the lake also disappears.

“Unfortunately, these are some bandits who gave completely wrong information, put pictures of a completely different place, changed its name and created a legend. The cave with the lake is small, the hinge is big, the road “It’s hard and you’ll be disappointed,” he concluded.

If you still want to see the cave, they both told us how to get there.

“From the hermitage of Iezer, there are about 20 km. Then cross the tunnel, go down to the valley of Cheii, below the corner of Cheia, in the valley, make this Bear Ogas on the left, which is very steep and with a lot of rubble.

And as you go up, about halfway down this gorge, on the right side as you go up, but geographically on the left, there is this cave, the lake cave is described in a Romanian cave guide since 1984 ” , explained Cristian Lascu.

In any case, once you arrive at Cabana Cheia, the cabin owner will guide you if you have forgotten any of the milestones.

What other caves are there in the area

If you continue to enter the area, you can explore more caves.

“There are several caves in these oges. Above all there is the Salamander Cave, there is the Pearl Cave, below is the Murgoci Cave, which is somehow more accessible, right at the base. there is the Green Tulip … they are all small.

Near the monastery of Amnota there is a cave with a very interesting history. It was discovered by a monk and is called Monk’s Avenue. It is very interesting, about 90-95 meters deep and has beautiful stalactites at the bottom. But it is completely unrecommended for tourists and it is quite dangerous as it is oatmeal, almost vertical, and there are very threatening stone falls, ”Lascu also said.

So if you get to the area, you have something to do, the scenery is wonderful, but they are local Romanians. We have learned the lesson: whoever runs after emerald horses on the walls grabs, as they say in worldly language, the ear.

“I don’t know if there is another more recent cave in the massif and this story is due to a liar who wrote the bazaars, but it still happens, it’s not very rare,” Cristian Lascu concluded.

And to see what you can visit in Buila-Vanturarita, here’s a safe source: the national park website.