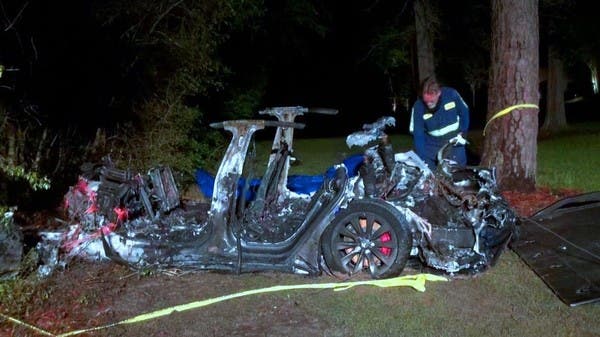 A car with two men inside, neither of them driving, veered off the road in a suburb near Houston, Texas, and collided Saturday at 11:25 p.m. with a tree trunk and caught fire, and those there they were burned.

Police found that one of the two men was 59 years old and was in the front passenger seat, and the second was 10 years older than him, was in the back seat of the American-made Tesla 2019 model, according to which reported yesterday and today by local media. Including the CBS News website, the company reported a 99.9% confirmation from police that no one was behind the wheel at the time of the accident.

As of yesterday, police were still investigating whether the driver’s automated assistant program was running, as official Tesla operating instructions stipulate that their work reduces the driver’s workload, but it must be done together. with the driver. hands are behind the wheel and are ready to take on the task when needed. Despite its capabilities that have become more sophisticated over time, this does not mean that so far the human Tesla driver can be dispensed with.