Temperature drop of up to 10 degrees, heavy rain and snow THE WEATHER ALARM IS ACTIVATED 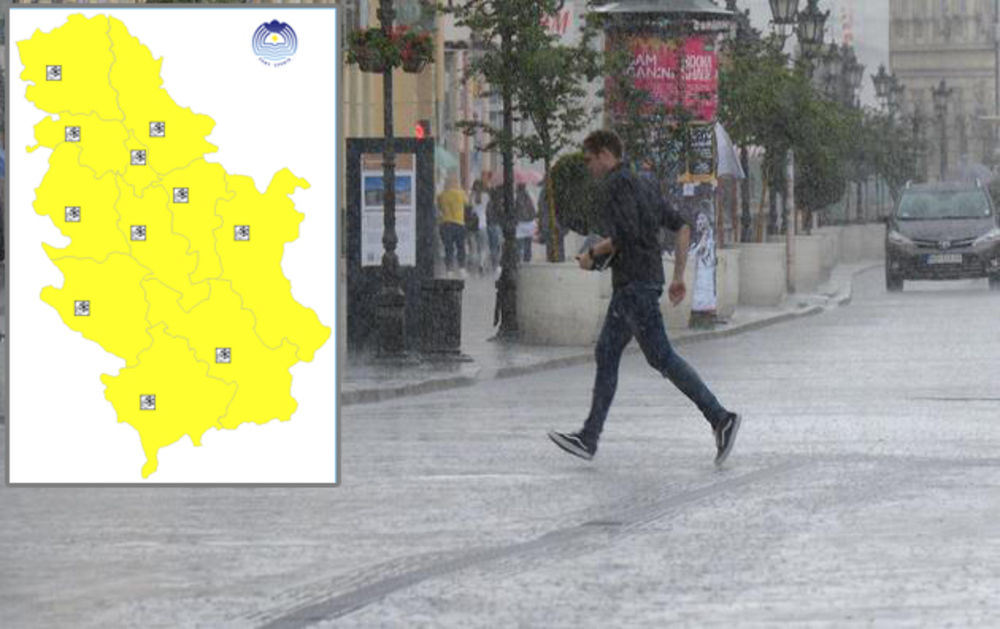 In the last few days, it seemed like the winter was slowing down because we had pretty high temperatures at this time of year and a real spring weather. However, the cyclone coming from the Mediterranean tonight provides cooling with rain and showers, while it will snow again in the mountains.

– This morning a secondary cyclone has formed over the Gulf of Genoa and today it will move through northern Italy to the Adriatic. During the night and night between Sunday and Monday, this cyclone will strengthen and move from the Adriatic Sea through the Balkan Peninsula, and its center through our area, north and west of Serbia and in the northeast – wrote meteorologist Djordje Djuric on his Facebook profile.

According to forecasts, this cyclone will cause stronger clouds with rain and showers in Serbia on Sunday evening, as well as at night between Sunday and Monday, thunderstorms are expected in some places with the penetration of the cold front, while wait for snow in the mountains.

– A moderate to strong south wind will turn to a strong northwest on Sunday evening and during the night after the penetration of the cold front, and will be very strong, gusts and storms. The crossing of the cyclone and the penetration of the cold front will cause the penetration of significantly colder air masses from the north and northwest through the Pannonian plain, so that a more significant drop in temperature is expected. of 10 degrees and rain on Sunday evening and overnight in western Serbia to become sleet and snow – wrote Đurić.

On Monday morning, rain will turn into sleet and snow in the lower parts of Serbia, except in southern and southeastern Serbia. Rainfall will stop in the morning and clear up, so it is expected to be sunny in the middle of the day.

Temperatures will range between 4 degrees in the northwest and 10 degrees in southeastern Serbia. It is expected that from tonight until Monday morning in most parts of Serbia, 10 to 20 mm of precipitation will fall per square meter, locally and more, and the heaviest rainfall will be in the north and west. of Serbia.

– The new wave of precipitation expected from Monday at the end of the day until Tuesday at noon will bring 5 to 15 mm of precipitation, locally and much more, so that the total from Sunday evening to Tuesday in Serbia will be it is expected to drop from 15 to 35 mm, locally and above 40 mm, but for the time being no problems are expected with water levels in rivers, although there will be an increase in water levels in smaller rivers and medium-sized rivers – said Đurić.

Already on Monday at the end of the day and during the night, new clouds are expected with precipitation from the Mediterranean.

On Tuesday there will be clouds and moderately cold with snow. Snow cover will form in most areas and the current one will increase in the mountains. However, the maximum temperatures will be positive, so the snow layer will melt. As the snow will be very wet, humid and intense, there will be the possibility of breaking branches or damaging the mains.

The weather alarm is activated

“During the night, cooling with rain and snow. Monday morning and Monday to Tuesday night, wet snow. From Tuesday to Thursday, cold, occasionally light snow with the creation of less layer of snow at the bottom and increase in higher areas, ”reads the RHMZ announcement.

In addition, according to meteorologists’ announcements, a yellow weather alarm will be triggered tomorrow in Serbia, across the country.

As explained in the explanation, a yellow alarm indicates that the weather may be dangerous (potentially). Expected weather events are not uncommon, but caution should be exercised when planning activities exposed to weather risk. It is necessary to continue the information on the forecast weather conditions. Do not take unnecessary risks.