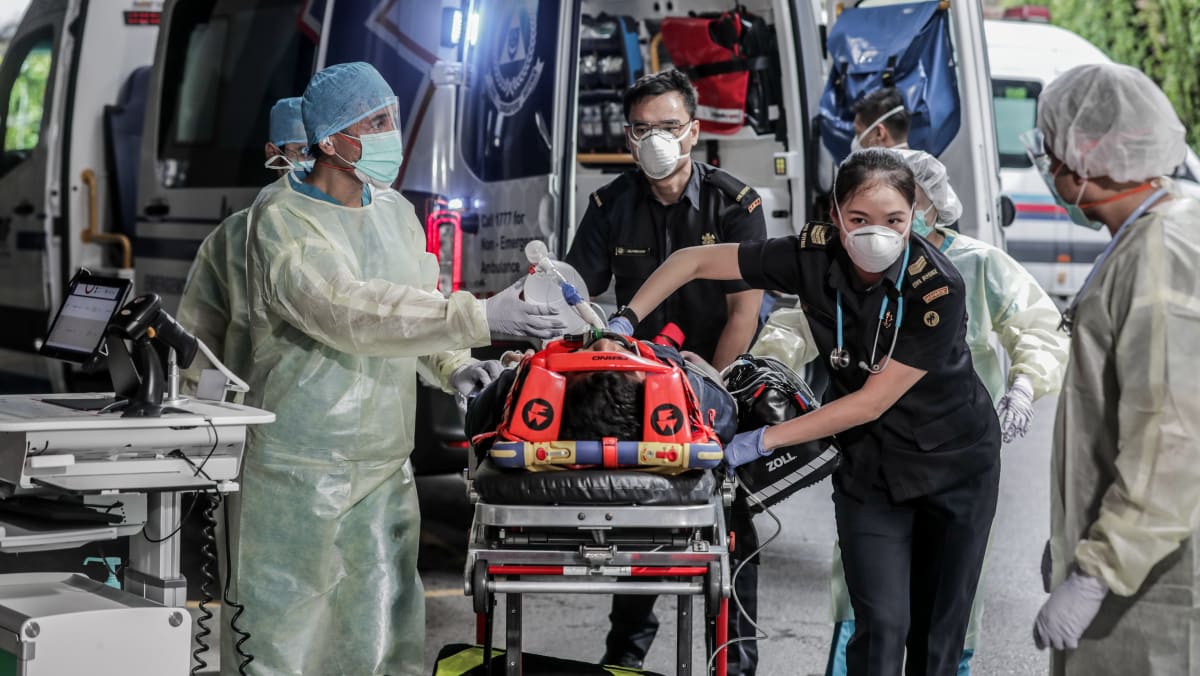 SINGAPORE: The Singapore Civil Defense Force (SCDF) has experienced a 35% increase in the number of calls requiring emergency medical services in the past three weeks, it said on Friday.

In response to questions from the CNA, an SCDF spokesman said the COVID-19 situation had “put enormous pressure” on the health system, including the force’s emergency medical services.

“To ensure the safety of the patients we transmit, we have introduced EMS (emergency medical services) infection control measures, including decontamination of our ambulances after transmitting COVID-19 to each patient.

“In addition, in the last three weeks, SCDF has seen an increase of approximately 35% in the number of calls requiring EMS, going from an average of about 550 calls per day to about 750 calls per day.”

To address this, the SCDF has “implemented several measures” to ensure it can continue to “respond quickly” to life-threatening emergencies, the spokesman said.

“SCDF wants to assure the public that we remain committed to attending to day-to-day medical emergencies, while helping the national effort to manage the situation of COVID-19,” the spokesman said.

This comes after a Straits Times reader told him he would have to wait 30 to 40 minutes to get an ambulance after making an emergency call.

In a forum letter posted Oct. 7, Ms. Tan Kexin said Sept. 29 had called 995 after her father collapsed in the toilet.

“I was surprised when the call operator told me that all the ambulances had been deployed due to the COVID-19 cases and there would be a 30 to 40 minute wait for an ambulance to arrive,” Ms Tan wrote. .

“The ambulance took 30 minutes to arrive, even though it was a weekday afternoon with little traffic and my house is a five minute drive to the nearest restructured hospital, to which the ambulance took me.

“I understand we are in the middle of a pandemic, but I find it strange that I was told at the time I called that all the ambulances had been deployed and capacity was reduced due to COVID-19.”

Tan wrote: “Every second counts for patients who have suffered an emergency condition such as cardiac arrest, stroke or a traffic accident, while the result is unlikely to be very different for a suspicious case. of COVID-19 if taken to hospital hour later.

“Is this the most effective way to choose? Do we inadvertently prioritize some lives over others in how we deal with this pandemic? ”

In its response, the SCDF thanked Ms. Tan for her “comments” and added that since then the team has spoken to her about her concerns.

“We understand the anxiety of Ms. Tan and her family and agree that every second counts during critical medical emergencies, such as cardiac arrest, stroke and trauma,” the spokesman said.

“Since 2017, SCDF has established the 995 call sorting system to evaluate and differentiate medical cases based on their severity. The system helps us better manage our resources by dispatching the most appropriate resources for each case. ”

Speaking to Parliament in early October, the Chief Minister of State for Health, Dr Janil Puthucheary, said the Ministry of Health had set up a dedicated fleet of 95 additional ambulances to send COVID-19 patients to different health centers. .

Before mid-September, it took 12 hours to send patients over the age of 70 who tested positive for COVID-19 in a polymerase chain reaction test to the hospital, Dr. Puthucheary said.

This figure had since increased to 48 hours and 72 hours since these patients obtained their results, he added, citing this as an example of how the recent rise in COVID-19 cases had affected the health capacity of Singapore.