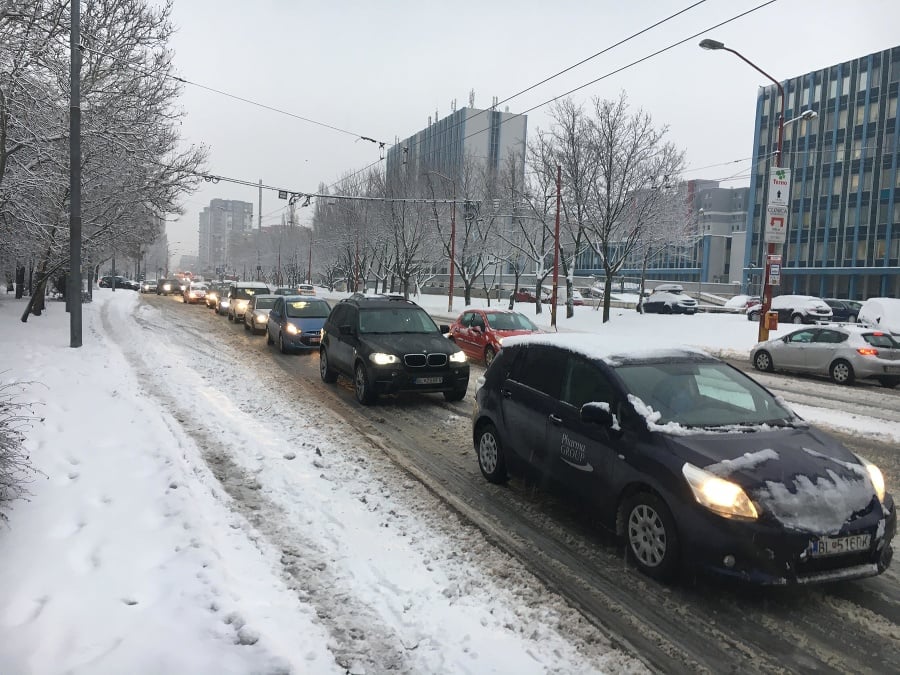 Are you due to bad weather in the column, walk through complicated sections or become witnesses to a traffic accident? Send your information, photos and videos [email protected].

10:44 Police spokesman Bratislava Michal Szeiff said accident, which occurred today shortly after 07.30 in route II / 501 in the direction of Rohožník in Solosnice. Probably, during the elusiveness of another vehicle, Mazda 323 collided with anti-tank cargo. The driver (34) suffered serious injuries with which he was transferred to the hospital.

10:40 To snow on Nitra and surroundings columns of forms. "Most of the city and the subway lines are, therefore, slow, with delays that usually reach 20 minutes or more, sometimes more than an hour." reported to the Arriva Nitra transport company. Arriva currently does not use the Prameň stop on line 11, other lines are running all the way.

10:35 At Mlynská Dolina from Bratislava to Patronka accident, in which the right bar is locked.

10:25 In most of Bratislava in the direction of Stvrtka na Ostrove they were beaten with 2 cars. Concern for delay.

10:24 To two accidents It was behind Trencin behind the canals, outside the city. You have to be careful because they are in a corner.

10:23 In Bratislava, in Vajnorská, is Tomášikova broken bus and blocks a bar.

10:22 Behind the Čebovcami towards Kosihovce (district of Veľký Krtíš) on route 75 the car crashed. The section is exchanged in a single lane, the traffic is controlled by the police.

10:20 The sending of DPB at 12:00 cleaning nationwide and the rescue of the corridors, tracks, trains and public transport stops that the company has in its management.

10:14 At D1, between Bratislava and Trnava thick snow. Daily lighting is not enough, drivers must use fog lamps

10:13 At 67 km D2 behind Bratislava to Hungary the car crashed, blocking the left bar.

10:09 accident It was made in Bratislava before the crossing of Patronka from the Mlynská dolina, a strip was blocked. Concern for delay.

10:06 Administration and Maintenance of Roads Distributor Prešovský samosprávny kraj Jaroslav Štofko reported that the first-class roads are very wet, while in the second and third roads, snow slopes can reach up to three centimeters in higher places. "We have a bit of breeze in the Kezmarok area, there are snow-covered languages ​​and ravines, but everything is rampant without problems." Štofko said. She added that it is waiting for a heavier snowfall in the afternoon.

10:05 a Bratislava Airport The weather still does not cause any extraordinary situation. "Given the current climatic conditions, some flights can arrive and leave a slight delay, but still more, the programmed schedules." Spokesman Letiska M.R. Štefánik – Bratislava Airport Veronika Ševčíková.

10:04 Handlov Hill is impassable For all cars, the mountain pass of Šturec is double locked for all transport.

10:03 In front of Zeliezov in the direction of Levíc finished bus off the road and once again, the car crashed.

10:02 Accident It is between Toll and Krivan, where the van has fallen. Drivers move alternately on a lane.

10:00 for heavy snowfall on the Ladzany route – Levice runs the traffic police.

09:56 Suburban subway lines Due to bad conditions on the road, there are significant delays, up to two hours. "The situation is very complicated from all directions." He said on the lines that lead to the capital of Záhorie, around the spokesman for Pezinka and Senca Slovak Lines, Eva Vozárová. Due to unfavorable weather conditions, trains From the train stations in Bratislava, the company Železničná spoločnosť Slovensko informs Twitteri.

09:55 In Bratislava to Apollo Moste in the direction of the center the bus failed, block a bar.

09:50 accident on the route Vrbovce – Sobotište. Due to the injured truck, the section is inconvenient. Drivers can choose their way to Myjavu.

09:35 the column In front of Ruzomberok, Ivachnova is about 15 minutes away.

09:31 the accident He also arrived at Ťapesov (district of Námestovo) in the main movement. There was a truck with a car, the traffic guided by the fire brigade, waited for the delay.

#NEHODA In Tápeš, in the main movement, a truck with a ripped car, the traffic guided by the fire brigade, waits for the delay. pic.twitter.com/wpA97LwtWu

09:20 accident He left the exit D1 towards Kraľovian, where they hit 3 cars. In the snow section, we must pay attention to bobsleighing.

09:11 The Vyšehradné mountain pass is difficult to drive, smile There are several trucks.

09:10 At the entrance of Zvolen from R1 the tank crashed, a bar is locked.

09:09 On the route Dolný Kubín – Oravský Pozdámok, a truck with delivery van. They are formed column.

#NEHODA On the route Dolný Kubín – Oravský Pozdámok, a truck with delivery, the section declared as no-jet, columns are formed. pic.twitter.com/TKnBWK1mnw

09:08 In Bratislava, in the Sitina tunnel in the direction of Petržalka, the speed is reduced column.

09:02 accident She took the Nitrianski Hrnčiarovci towards Štitáre, where she hit the bus. Partially block a strip, but it is worth to lean, since the drivers are at the last minute.

09:01 accident It is in front of Novák in the direction of Upper Vesteníc, there are several trucks and there are columns.

#NEHODA Opposite the Novák in the direction of Upper Vesteníc, there are several trucks and there are columns. pic.twitter.com/ugngOIi7xT

09:00 The situation in Liptov is quite critical due to heavy snowfall. accident to Rojkov.

08:58 In the alpine terrain of all the mountains there is still one morning small danger of avalanches, second degree of international scale of five dimensions. The snowy afternoon and the strong winds in the low Tatras and Malá Fatre increase the risk of avalanches in the third grade, reports the Avalanche Mountain Rescue Service Center. The slopes and channels of the north and northeast directions are dangerous, where panels can be freed at a small additional charge, especially when skiing or skiing slopes. After the snowfall, there may also be small avalanches.

08:54 Sliding paths on the route Dolný Kubín – Oravský Pozdámok, the section is a complaint that does not drive.

08:53 Snowy roads They are on the Hriňová – Kokava nad Rimavicou route, the mountain stretch is not for trucks.

08:52 a snowy and slippery roads You should also be careful about Kuts.

08:50 The mountain route is impassable for trucks at 10 meters.

08:45 In Banská Bystrica at the exit of R1 to Rudla, Sasova the bus crossed, the section is difficult to drive, drivers recommend using another landing pad.

08:40 Snowy and slippery roads They are also behind Puchov for the Czech Republic, in the section drivers also warn pedestrian movement.

08:30 According to the information, the Green Wave has become accident In Bratislava at the junction of Pajštúnsko and Smolenická, where he crossed the bus with the car.

08:29 Accident It is also on the hillside of Fačkov towards Žilina, where the cross is crossed by a truck, the section is difficult to drive. The mountain route is closed for trucks of more than 10 meters.

08:26 Colon It is found throughout the Senec and the surrounding area, the Senca ring road is completely clogged. If you can, avoid Sencu.

08:19 The weather complicates public transit traffic in Bratislava (MHD). "The problems with the slopes are mainly in rugged terrains" inform Dopravní podnik Bratislava (DPB) into the social network.

08:18 First snowfall at the KVP home in Košice.

08:17 Column he will train behind Kraľovani towards Martin, where the pilots remain for more than 40 minutes.

08:16 At Ruzomberok, at the intersection with Bystrická basket in the direction of Ivachnová, column They are formed in all directions, but Ivachnova is already standing on D1, keeping for more than 30 minutes.

08:15 the column At the exit of Pezinok to Svätý Jura, the drivers are kept for about 20 minutes.

08:14 The border crossing Svrčinovec – Mosty u Jablunkova to the Czech Republic is impassable, a truck was crossed.

08:13 There are two before Rohožník in the direction of Plavecký Mikuláš accidents In turn, the tranche is not negotiable.

After snowfall in the Novohrad and Gemer regions, fresh snow from one to three centimeters was kept on most of the districts of Lučenec, Rimavská Sobota, Revúca and Rožňava. Inform the Slovak Road Administration (SSC) through its website zjazdnost.sk.

Fresh snow, about one centimeter, according to tourists, is also on the main southern slope, that is, on the I / 16 road from the Lučenec section to Brzotín, in the district of Rožňava. The same snow conditions are also found in the sections of Oľďany – Babin Most expressway of the Rimavskosobotskı district and Figa – Tornaľa in the district of Revúcı.

With a cool layer of two centimeters, drivers must look at the mountain pass of Soroška near Rožňava. Fresh snow with a thickness of one centimeter is found in the mountains of Chorepa nad Klenovcom and Zbojska nad Tisovcom, in the Rimavská Sobota district.

Routes I, II. and III. The roads are on the track, the surface of the road is very wet, in many places in Slovakia covered with a layer of strawberry to the thickness of the oppressed snow from one to three centimeters, at roads of Senica, Nové Mesto nad Váhom, Holíč, Spišská Stará Ves, Malý Lipník, Stará Ľubovňa, Dolný Kubín, Námestovo, Trstená, Záborská and Tále to a thickness of four to five centimeters. One to three centimeters in high snow is in the zones of Červený Kláštor, Turčianske Teplice, Martin and Levoča, four to five centimeters thick in the stretches of Haligovce and Spišská Stará Ves roads.

HP Šturec, Donovaly and HP Kremnické Bane (route I / 65) are closed for trucks of more than ten meters by a dense snowfall.

On the way I / 35 Galanta – Gáň, I / 75 Sládkovičovo – odb. Váhovce and on the roads of the lower classes of the Galanta district is a glacier.

The open segments of the roads of the district of Nižná Šebastová, Záborská and around Trstená form snowy languages ​​and hills.

#KOLONA At D1, behind Sencom, towards Bratislava, it will be held for about 40 minutes pic.twitter.com/QBq4Lwg7gN

The Slovenian Hydrometeorological Institute (SHMÚ) issued a first level alert for both regions before the snowfall, which runs until 18:00. Meteorologists expect some snowfall in some places, which can attack from 20 to 30 centimeters in new snow.