Šefčovič has 16.5 percent as Mistrík. Harabin is in sight – Denník N 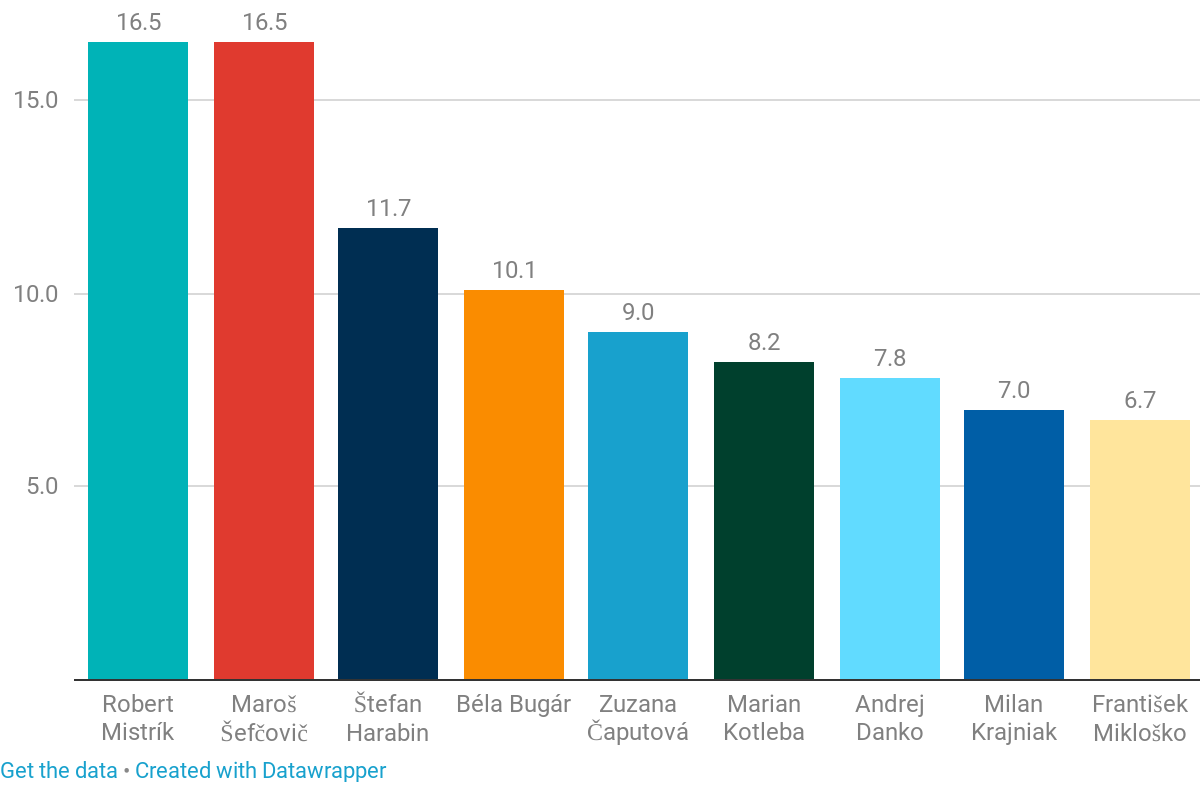 Eurocommissioner and the presidential candidate Smer Maroš Šefčovič have become one of the favorites after the recent admission to the campaign. Your initial preferences, however, show that all the voters in the Address have not yet reached.

This comes from the Focus presidential survey, which showed candidates who would vote in favor of voter elections. The only exception, in addition to the weaker candidates, is Andrej Danko, who said in December that he would run for the elections, but on Sunday, at TA3, he said he would not vote.

The poll has been published by Markíza in a discussion about The Body with Michal Kovačič.

Maroš Šefčovič would vote 16.5% of the voters in the second fortnight of January, a tenth as opposed to the opposition candidate Robert Mistrik. However, the difference between the candidates is reduced, after a couple of favorites are followed by a group of seven more relevant candidates, which is less than twelve percent led by Štefan Harabin.

He focused on the support of the candidates between January 16 and 23 of this year. Probably, the candidacy of Šefčovič was written by Denník N on January 8 and, since then, appeared in the media. The European Commissioner has officially announced the interest for the presidency on January 18, the second day of data collection.

So the Sefcovic number can be interpreted as a boot, because it has not been basically favored. At the same time, however, he was not criticized for his opponents, and his name resonated at the time that Focus respondents about the presidential elections asked the respondents.

Robert Mistrik, who has the same support as Šefčovič, has been campaigning since May. In Tuesday's debate, Daily N said that Focus's study should be a bridge between him and Zuzana Caputova in a joint approach. Místrík and Čaputová during a week after lunch with the leaders of the OĽaNO movement declared that the first round will be only stronger than this couple.

However, Vice President of Progressive Slovakia, Zuzana Čaputová, said they should focus on February 26, when they would have to cast votes with the names of the candidates and persuade voters with their programs. Čaputová has a 9 percent stake in the survey.

The focus also measured the possibilities of the candidates in the second round. From the Mistrík-Čaputová couple, Robert Mistrík would compete better with Smer. Their odds are virtually balanced today, Šefčovič would have voted 50.1 percent of the voters in this configuration, Mistrík 49.9 percent. In the case of Čaputova, the ratio of 58:42 is in favor of Maroš Šefčovič.

This ratio is calculated from the determined respondents, which were more than 50 percent of the total sample. About a third of respondents said they would not vote in favor of this offer in Round 2 (38% of respondents included Šefčovič-Čaputová), 12% of people still do not know what to expect. have determined

At the last November meeting of Focus presidential candidates, Mistrík had around 12%, Čaputova more than 4%. However, the comparison of these figures is difficult, the Focus of November did not consider the candidacy of Maroš Šefčovič, but Foreign Minister Miroslav Lajčák.

The January Focus survey confirms the true support of Supreme Court Judge, Štefan Harabin. In the first round, he would be elected by 12% of the voters, but at a time when he is waiting for the candidature of Andrey Danko and he expects that Marian Kotleba be elected. Both had 8 percent in the survey. In particular, among the voters of the LSNS of Kotleb, Harabin now collects support and 16% of the voters would vote.

According to the survey, Harabin would not have had the chance to win the second round; But we are talking about a situation where he will meet with one of the Robert Mistrík or Maroš Šefčovič. Both, according to the Focus, have won two thirds of the votes and Harabin would be defeated.

Otherwise, now is the purely theoretical pair Harabin vs. Danko, then the numbers would be adjusted. The reason is that up to 50 percent of respondents said they would stay home in this case. If Šefčovič met with Harabin in the second round, 40 percent would not vote.

Prime Minister Mosta-Hid, Béla Bugar, has a decent support in January, focusing on 10 percent of the voters. The Bugar is fortunate thanks to virtually all Most-Hid voters behind. More than 90 percent of voters would vote for this, a remarkable name. Partially directed to voters of other parts, with the exception of the CIS.

However, Bugar apparently had the problem of persuading in the second round. According to Focus, he would lose Maroš Šefčovič (68:32), but also Andrej Dank (54:46 percent of the voters).

Sefcovic has only had one-third of Direction's voters

The most detailed survey data show other interesting facts. The most important thing is that, in domestic politics, the EU's lesser-known commissioner, Šefčovič, has not yet addressed relatively few voters in the direction. Only third parties have support. Only a quarter is still unresolved, Andrej Danko and Stefan Harabin share a fifth.

Thus, in the coming weeks, the head of the campaign will also have to focus on winning the nominees of the party he nominated him, and did not lose them, for example, Harabin. Curiously, Šefčovič also mentioned that less than a fifth of CIS voters is the favorite.

The former Justice Minister of HZDS Harabin is pleased to receive intersectoral support: not only part of Smer's voters and LSNS want to vote, but for example 8 percent of Olea's sympathizers and a smaller percentage of SNS supporters and SaS.

The opposition candidate Mistrík has its voters especially among the supporters of the parties of SaS and Spolu that support it, but also among the voters of Progressive Slovakia (there is more support than Zuzana Čaputová, but we are already enjoying the # 39; a small sample).

Opposition presidential candidates have the potential to grow, especially among OLAF voters, with the most undecided voters up to almost 40 percent. However, a high percentage of undecided (20-25%) is among the most significant voters of all parties, with the exception of Most-Hid, whose sympathizers are clearly behind Bel Bugar.

The interesting figures also show the electorate of the movement We are family. Only a quarter of the voters of Boris Kollar are determined to vote for their candidate Milan Krajniak. Attendance of a fifth of the voters We are half of the family divided by Zuzana Čaputová and Štefan Harabin.

The support limits of Marian Kotleb are also quite obvious. The former Banskobystrický župan is about to choose 65% of the LSNS voters, but there is an insignificant support among those in favor of other parties.

Approach asked more than 1,000 interviewees to presidential candidates through personal consultations from January 16 to 23 of this year.