Want to buy flooded tickets from Germany? What to do so that the “bargain” is not a nightmare 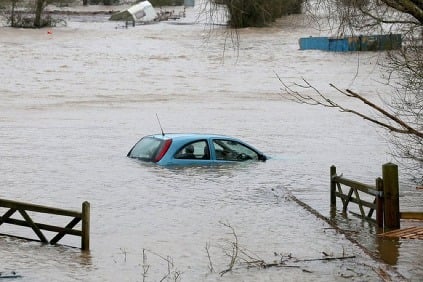 Flooded “trips” from Germany, Belgium and the Netherlands can also threaten our market.

Germany, Belgium and the Netherlands are hit hard by last week’s floods. These countries are among the countries from which the most used cars are imported into Slovakia and the Czech Republic. After the catastrophic floods, dealers in these areas can be expected to make a great effort to get rid of the flooded vehicles. Therefore, when buying a used car on import, make sure that the car does not come from areas that were under water.
“In our experience, flooded vehicles begin to appear at various dealerships or in advertisements shortly after floods. Due to the instantaneous nature of the floods, especially in Germany, which is the most popular country for importing used cars, a large number of cars can be expected to have been flooded. Up to 100 vehicles were affected by the rapid flooding, even directly on the North Rhine-Westphalia motorway. An even greater number of attempts to sell these vehicles can be expected to head east“said Petr Vaněček, Chief Operating Officer of AURES Holdings, the operator of the AAA AUTO car center network.
Every year tens of thousands of cars are imported from abroad to Slovakia. Most imports come from Germany, which has been hit by record floods in many days, including large congested areas with heavy vehicle traffic. “Trips” from Belgium and the Netherlands similarly affected are also often imported into Slovakia and the Czech Republic. With modern vehicles full of electronic equipment and various safety systems, susceptibility to breakdowns increases, of course, especially after it has been flooded with large amounts of water at a height higher than that of the engine compartment. Many defects can be life threatening. This is due to the fact that at virtually any time electronic faults or problems can occur on the outside of the car due to excessive corrosion.
“At the time after the floods, we always record attempts to sell cars that are obviously damaged by the water. Therefore, we carefully check where the vehicle was driving. We check in much more detail if, for example, there is no mud in several hard-to-reach places, perhaps under the door trim. It is often found behind the seal around the door or under the board. The highest level of corrosion under the trunk carpet or odor will also say a lot“, describes Petr Vaněček.
Motorists should also approach the purchase of a carefully used car. Definitely, they should demand a provision in the purchase contract so that the vehicle is not flooded so that they can claim financial compensation as part of the complaint. AAA AUTO provides a lifetime money back guarantee if a flooded car is put up for sale despite all measures. “Due to the situation in Germany and Belgium, a large number of cars from these countries can be expected to appear on many advertising servers. However, cars from the Czech Republic may also appear, where local flooding also occurred in some places.“Adds Petr Vaněček. Outside cars are mostly individual imports. It is not worth buying used vehicles from resellers. These vehicles run the real risk of serious problems and the associated associated additional repair costs. Vehicle itself.”After flooding the vehicle, the entire electrical installation would have to be replaced, which means costs from hundreds to thousands of euros. Therefore, flooded cars are virtually unsaleable at the place of origin and are destined for export to, for example, the Czech Republic or Slovakia.“said Petr Vaněček.
AAA AUTO focuses on home vehicles, ie. with the first registration in the SR. For these vehicles, it is possible to better monitor their service history and insurance claim history, including information on flood damage. “For vehicles imported from abroad, inspection is much more difficult, especially if scammers try to disguise the origin of the car, for example by selling quickly to third countries so that the vehicle does not appear to come from flooded areas.“, concluded Petr Vaněček.

What to consider when buying a used car:

– status of the tachometer compared to internal wear
– body paint shadow
– if the individual parts of the body are adapted
– Remarkably new parts to the vehicle, for example, faded lights at the rear and new ones at the front
– underwear, in particular the driver’s seat and the carpet underneath
– exhaust fumes
– vehicle service records
– number of owners
– previous owner of the vehicle
– origin of the vehicle
– inspection of all electrical equipment, or diagnosis
– inspection of the bearing parts of the body
– the so-called legal purity: lease, pledge
– flooded car

How to tell if a car has been flooded:

– odor, moisture and mold inside, remnants of mud or sand – under the seats, under the cover of the fuel pump, in the cables of the electrical installation, in the engine compartment in various joints and the like.