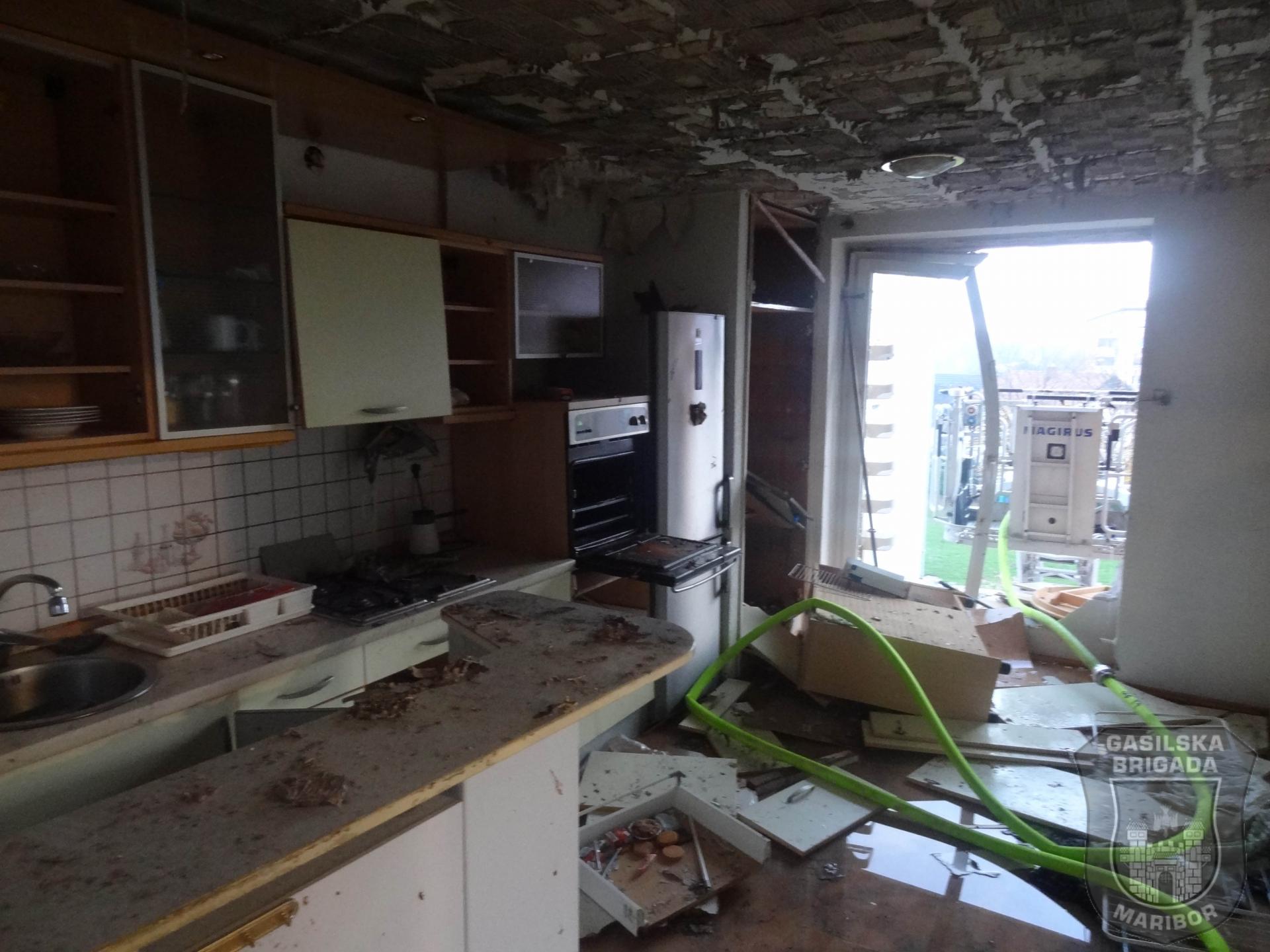 Violence in Maribor ejacated half an hour ago, according to the Directorate for Protection and Rescue of Slovenia (URSZR). Most likely, natural gas exploded, which was used for cooking, and not for heating, said the commander of the gas brigade Maribor, the leader of the intervention, Primož Osojnik.

She exploded in a residential block at Bratov Greifov's address 18. The first man of professional firefighters from Maribor Aleš Ciringer said that gas exploded on the third floor of one of the blocks, and this under almost completely destroyed.

According to Primoz Osojnik, four people were injured in an explosion, one of them worse and three easier. They all transported them to the University Clinical Center Maribor. Doctors are still fighting for the lives of the wounded.

"We evacuated residents from all 32 apartments. According to the first assessment, all apartments were damaged, of which at least six were completely destroyed," Osojnik explained during the intervention. 30 persons and nine pets were temporarily withdrawn from the facility. Later, the URSZR explained that 18 flats were damaged and six were destroyed.

Osojnik could not answer the question of whether residents can return home today. "In the apartment where the gas exploded, certainly not because it was completely destroyed," he told Maribor24 and added that one person was found in the apartment. ZiR MOM service offered alternative housing units to the inhabitants of destroyed houses, but moved to their relatives.

The burial on Brother Greif's street was supposed to be so powerful that they heard him on the other side of Pobrezje. The damage will be huge. The firefighters quickly extinguished the fire, while the police made a tour of the events later in the afternoon.


There were more than 30 firefighters on the job. PHOTO: GB Maribor

"We move from housing to living space and we are checking that they are safe," she said in the evening WHAT said a representative of the Maribor Police Directorate Bojan Kitel. The police will protect the area overnight, not only because of the interest of investigating the causes, but also because some apartments have been left without a door in an explosion.

Other injuries, firefighters and police officers have different information. "Three people are in need of medical help, which is easily damaged, and maybe the number of injured people during the night will change if someone else needs help, perhaps because of shock or the like," Kitel said.

"The first findings show that this is an explosion in the apartment, and the consequences are also visible around 50 to 100 meters around this block of flats. Due to this scale, the tour will last later in the night and tomorrow It is necessary to explore a very wide area before we reach the center and find out the reason for this event, "said a spokesman for the police.

In cooperation with civil protection, in his words, they will ensure that everyone who is evacuated gets a safe shelter. "Some of them will remain in the block, as all apartments are not damaged," he said. Most of them have already met their relatives. "If that is not possible, they will be provided with temporary accommodation through the Public Intermunicipal Housing Fund Maribor," they said in the municipality of Maribor. There are about 50 people living in the block.

The evening reported that in an apartment in which he exploded, an elderly man who allegedly tried to commit suicide lived in unofficial information. After writing the newspaper, he allegedly went to his apartment two months ago, when he should try to judge himself.

One of the residents, retired Ivan Dajchman, he told us that the man is about 53 years old. Among his neighbors, he has repeatedly said that he is dangerous to himself and to others. "Once we saved life with his son," Dikman said. To inform the manager about the dangerous behavior of a man, Diachman denied it.

As we learned, StanInvest is the director of the building, but its director Benjamin Patchnik according to the maintenance chief, is currently absent due to illness.


The block in Maribor is badly damaged. PHOTO: GB Maribor