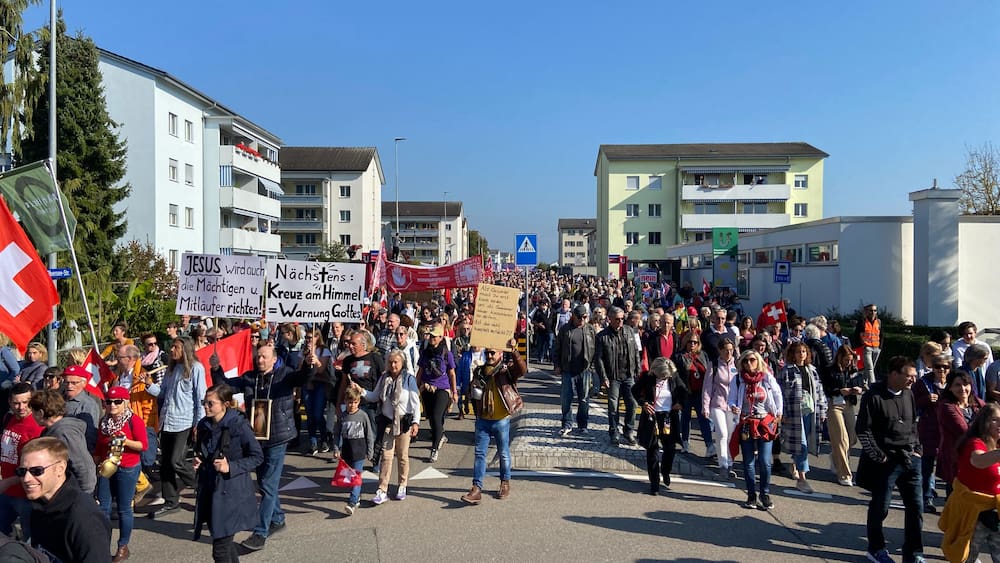 The Massvoll group has called a rally against the Covid law on Instagram. At 1 p.m., 1,000 skeptics gathered in Rapperswil at the Grünfeld sports facilities to walk along Oberseestrasse to the Para car park at the ice hockey stadium. City councilor Kurt Kälin was expecting 2,000 to 4,000 people in advance, as CH Media writes.

A few hundred opponents of the measure and government critics gathered on Saturday for a demonstration in Aargau. The rally began at 2pm in Baden. Right at first, there were clashes between skeptics and a handful of counter-protesters. Police and spectators were able to reassure the tadpoles again.

Musician organizes a demonstration in Baden

The rally was organized by Linda Kratky, singer from Baden. Expect a few hundred participants, including Freiheitstrychler, writes “CH Media”. Due to the concentration, there could also be disruptions in public and individual traffic, the city announced.

Deploying police and security forces to the demonstration comes at a cost. The city of Berne therefore demands that the crown protesters bear part of these costs.

A left-wing group called Solidarisches Bündnis Bern called a counter-demonstration on Saturday afternoon. Although the rally was not approved, about 300 people gathered at the Waisenhausplatz. Police in riot gear stormed a rally on Friday, removing hundreds of protesters by truck. Most of the young participants practically all wore a mask.

In an Instagram post, the left-wing alliance writes: “We must not unquestionably abandon Berne and other places to a dangerous movement that does not move away from the extremist ideas of the right, but partly supports it and it thus favors attacks “. (SDA / gin)