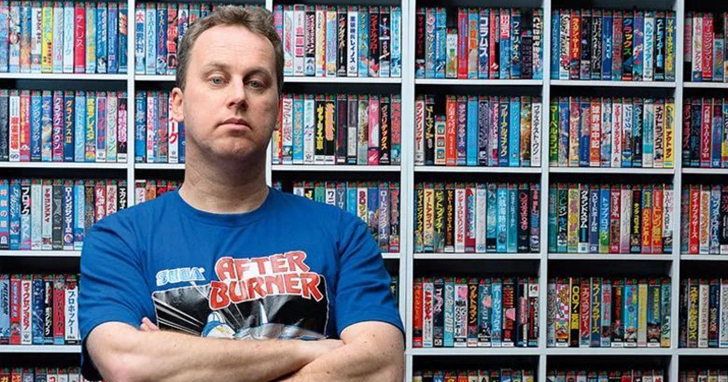 32 years ago, a 12-year-old boy told his mother: "I want to collect all video games." After 32 years, the boy has fulfilled his promise. More than 18,000 video games, as well as a large collection of consoles, consoles and arcades, earned him the world's highest record in video games worldwide. The man with legendary experience is Australian player Joel Hopkins.

(This article authorizes reprint of the Research Institute, the original link)

Build your own "royal game"

"Nobody can think of an Australian who will have the largest collection of games in the world, which will make you feel unbelievable." "In the United States, many stores in stores sell $ 1-2 games. for us. "Joel describes the environment for a collection of Australian games.

Joel's home is located on Melbourne's outskirts in Australia, at the age of 44, he devoted most of his life to his game. Although there is no debt, there are no deposits at all – next to the house and the car, he put all his revenues into his collection of games.

He even built his home in a "video game museum" for this purpose – Joel himself designed the structure of the whole house and participated in the whole process of selecting building materials and building a house. Setting up every room, and even setting up each shelf, ended it.

Joel shares his collections by categories and vendors and keeps them in different areas.

Old-style gaming computers are merged, and hosts and games that are known or not familiar to different players are stored in different regions across different platforms such as Sony, Microsoft, Nintendo and Sega. In addition, he has a spacious arcade room where his favorite arcades are sitting, and he and his family are entertained here in their free time.

Joel and his "Last Player"

Recently, Joel just filmed the movie for about 20 minutes and showed some of his collection games in the movie.

In an interview with foreign media, Joel talked about the reasons for displaying his collection on the Internet. Much of it is to "compete" with other collectors, but it's not from the essence, but from the responsibility.

"I never saw someone else like me," said Joel. "I do not want to show anything. After all, I'm an ordinary person, but when I see a collection of other people on YouTube, I sometimes feel that" it's not much. "In addition, I discovered that everyone likes to watch video games. But some people do something, and some of the things they are talking about are wrong, which makes me angry. "

This outrage against the mouth of the letter has made Joel decide to start building his own Youtube channel "Last Gamer" and use his rich knowledge and collection of games to erase the source. That year, Joel was 41 years old.

So far, his number of Ioutube channels was about 56,000. This number is not much in the game. Despite this, Joel remains very satisfied.

"This is just the beginning, I will continue to do this."

Good memories for a clean time

During the seventies, Joel first contacted the Atari VCS console and started his video game. When he was a teenager, he started downloading games from the Internet – of course, pirated. Joel misses the past. "I hate pirated game now, but there really was a clear time, it was a wonderful time."

In the early nineties, he opened his own video game store and imported video games from abroad. "The first one I shipped was 300 books" Kuick Ciclone 2. "It took two weeks to sell, not to make money, just to see that people from this country come to my store from different places. It's a wonderful time. "

Today Joel still keeps a lot of games he played 30 years ago. The one who heard him most was his earliest collection.Legend of Salda Three-way power of gods and four swords"," and "The Last Ninja" given by his mother.

"These games are invaluable," he said.

Joel did not hide his love for lost years. He used the Star Vars and Star Trek posters, various Japanese and American games in the surroundings, and souvenirs for pop culture to decorate their room in the memorial hall of the nineties.

"At that time, no one knew what to do with the computer, when you communicated with other people, nobody could imagine what it would look like in the future." In the eighties of the past century there were so many opportunities. Now there are no more extraordinary situations. The world is getting better and better, but I do not think it's that incredible. "

Despite this, Joel is still immersed in the memory of the video game. He once called friends to come to his home and play a "war machine" together. Such a happy feeling made him incapable of bearing tears.

"At that time, we started playing after dinner, we almost always play until the next morning. Now that I come in here, I often open the game just to listen to music." "Nothing is better than having the whole" Game Museum "is even more exciting. Now I can not go without them, and deeper and deeper."