In the later phase of the epidemic, why did the prevalence rate remain unchanged, but the mortality rate decreased? – “The Great Flu: A Deadly Plague Story” -PanSci 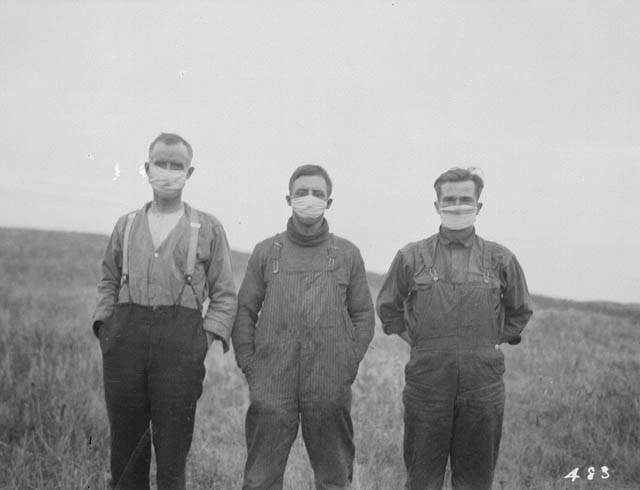 Vaughan believes that the cold virus poses a threat to human civilization, in fact, some diseases depend on civilization. Measles is an example. Because measles is immune to measles for a lifetime, it is difficult for the measles virus to survive in small towns because there are not enough humans to infect it. If no one remains infected, the virus cannot survive. Epidemiologists have estimated that measles requires a fairly dense population of at least 500,000 people to continue.

The cold virus is different. Birds are their natural hosts, so they don’t have to depend on civilization. Regardless of whether humans exist or not, their incense can continue.

Twenty years before the flu broke out, HG Wells wrote a novel “War of the Worlds” that imagined the Martian invasion of the earth. His battleship of death landed on the ground, no one can resist. Martians feed on the people of the earth and suck their vitality from the bone marrow. In the 19th century, humanity conquered every corner of the world and achieved unprecedented success, but was extremely vulnerable to the Martians. In the book, humanity has no weapons, technologies or strategies and no country or individual can stop these invaders with courage or effort.

Wells wrote: “I think a vague idea of ​​the past has become very clear now. It’s been going through my mind for several days. It’s a sense of government that has been removed from me. I’m no longer the spirit of all things, it is only one of the many beasts … the fear and the kingdom of humanity are no longer … “

But just as humanity is about to become extinct, nature exercises its power and intruders are also invaded. Infectious diseases on earth killed the Martians and nature did what science could not do.

For cold viruses, the laws of nature also come into play.

This rule makes the cold virus fiercer at first. Regardless of whether the virus is transferred from animals to humans in Kansas or elsewhere, it continues to mutate from human to human transmission and gradually becomes more efficient, moving from the mild cold that prevailed in the spring of 1918. autumn. But as his power approached its peak, two other natural laws appeared.

One of them is the evolution of immunity. When the virus crosses a certain group, that group will develop some resistance. The same virus will not re-infect the same person before the antigen drifts. The period from the onset to the disappearance of cold cases in a group in 1918 was about six to eight weeks. In an army full of people, this cycle lasts about three or four weeks.

There may be sporadic cases later, but the pandemic is over, all of a sudden. The curve of the epidemic is bell-shaped, but the number of infections will fall like a cliff after reaching the peak. There are only a few cases left and they all disappear.

Take Philadelphia as an example. In the week of October 16, 4,597 citizens died. The flu caused the city to collapse, the streets became ghost domains and people said the Black Death had come. However, ten days later, the number of new cases fell rapidly and on October 26 the authorities lifted the order to close public places. By the end of the war, on November 11, the cold had disappeared from the entire city and the furious virus was quickly extinguished after burning all the fuel.

Another natural law occurs in the virus itself. It’s just a cold. The cold virus itself is dangerous, it is more dangerous than usual to imagine fever or pain, but it rarely causes killings as it did in 1918. The virulence of the virus in 1918 was much stronger than any known flu in history .

But the virus wave in 1918 mutated as quickly as all viruses. There is a concept in mathematics that returns to normal, that is, after extreme events, less extreme events often follow. But this is not a law, just a possibility. The 1918 virus is an extreme example: any mutation will only reduce its lethality. That is a fact.

Thus, when the virus was about to wipe out civilizations like the Black Death in the Middle Ages, its mutations developed back to normal and became the majority of cold viruses. Over time, the virus is no longer so deadly.

The later it touches the virus, the less potent it is

The Sherman Barracks in Ohio recorded the highest mortality rate among officers and soldiers: it was one of the first camps to suffer a cold: 35.7% of patients had pneumonia and 61% of those who contracted pneumonia . Doctors at Sherman Barracks were stigmatized because of this, but Army research found that their capabilities were not inferior to the other barracks and they did everything the other barracks did. Is that the virus that attacks them is the most virulent virus of all.

Three weeks later, only 7.1% of patients in the last five attacked fields developed pneumonia; only 17.8% of those who had pneumonia died.

Another possible explanation is that military doctors have had more experience in the prevention and treatment of pneumonia, but scientists and epidemiologists cannot find evidence to support this argument. The leader of the military research team is George. George Soper, who was later promoted by Welch to chair the first major cancer research project in the United States. Shu Bai reviewed all written reports and interviewed several medical officers and concluded that the only effective measure against colds in all fields was to isolate cold patients and even the entire infected unit.

But these measures “if not applied carefully, will fail … there will be some effects when strictly implemented.” Aside from the mutation in the virus itself, he saw no effective way to change the epidemic.The later it touches the virus, the less potent it is.The same pattern applies to all camps. The mortality rate of officers and soldiers who fell ill between the first ten days and two weeks in the same camp was much higher than that of their colleagues infected in the later stages of the epidemic or colds after the end of the ‘epidemic.

Cities where the epidemic only erupted in the later stages also have lower mortality rates. In the 1918 epidemiological study, a very careful research report noted that in Connecticut, “there is a factor that affects the mortality rate, which is the distance between the time of the outbreak and the date of the epidemic in New London. The latter is when the disease first entered Connecticut … The virus was more violent when it first entered Connecticut and then gradually eased. “

All the United States or the whole world is in this model, but it is not an absolute prediction, because the virus will never be stable. It seems that the virus spreads more easily to places that are then attacked.

San Antonio, Texas, has the highest prevalence rate, but the lowest mortality rate. The virus has infected 53.5% of the population and 98% of families in the city have at least one cold patient. But at that time the virus had become mild and only 0.8% of people who caught a cold died (this figure is still twice the mortality rate of a general cold).

The virus itself has the power to live and die, which is not comparable to any medical care. Taiwan’s pineapple is banned by the mainland, how does the blue goddess of field 2 explode? Politics-China Times

The country saves pineapple in less than 100 hours by subscribing and breaking 40,000 metric tons, which is expected to exceed land sales-UDN United News Network

In an interview with Oprah, Prince Harry said bluntly: the process of leaving the royal family is “very difficult” -Free Times Electronic News