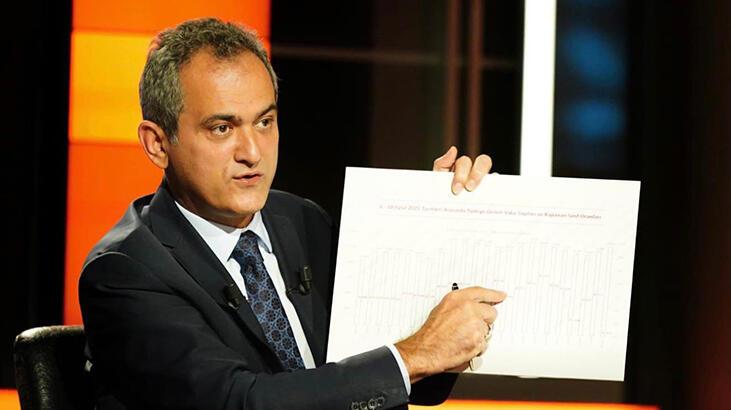 Speaking to Hande Fırat on Night Sight, Özer made statements about the educational agenda on CNN Türk’s live broadcast and answered questions.

Will the number of days until school decrease?

Expressing that in the new type of coronavirus epidemic (Kovid-19), they carried out the process in schools not by province and district, but by class and by case, Özer stated that they did not leave students alone to the 14-day period during which education was interrupted and live applications began in the classroom and the tablet needs of students who needed it were also met.

When asked about the number of classrooms closed due to the epidemic, Özer said: “We have 850,000 classrooms in our 71,320 schools throughout Turkey. Since September 6, some 5,900 classrooms have been reopened. “The system works within a certain schedule. What happens is that our schools are open and face-to-face training continues.” dit.

Recalling the statement by Health Minister Fahrettin Koca that one in 4 cases is under the age of 17, Minister Özer said that in response to the question of whether school closures will come to light in the future in due to the increase in the number of cases, the closure will not be on the agenda and the systematics they have developed requires the closure of classrooms, not the closure of schools.

Claiming that 2 percent of U.S. schools are closed, Özer said that rate is lower than expected.

“The safest place in our country right now is our schools”

Özer said: “The safest place in society, especially in our country, is our schools. Because there is no social place where the rules are applied and where there is so much control, which is not only followed by the administrators and schools, teachers, but also for parents “. He said.

Minister Özer shared a prepared table on class rates closed since Sept. 6 and said: “There is a distribution below 1%. In the US, 2% of the number of schools is closed. The rate of closed classes in Turkey is quite low. ” dit.

Expressing that there is a debate about “there are closed schools, there are no schools”, Özer said: “We have 71 thousand 320 schools. The number of schools with few classrooms is very high. This means that it could be a school that was closed.Two of our schools were closed.One of them is a private educational institution, a kindergarten.It has 6 classrooms, one of which is a sports institute and 3 classrooms.The school it was closed because there were 3 classrooms, they were closed, but the school will open in 14 days, society has to get used to it, there may be an increase in cases, schools can be closed, l ‘important is that open schools continue to exist.) we have not reached an alarming level for us, so we will not close our schools. ” used the phrases.

Minister Özer recalled that provinces and districts can take the initiative to reduce class time by 40 minutes for schools with crowded classrooms.

When asked about allegations that the opening of schools increased the number of cases, Özer noted that this had no scientific basis and said: “I think that if schools were closed in Turkey, there would be much more cases than current cases “. dit.

Learning loss support packages will be implemented from November

Özer, who was asked about the problems facing students returning to school, recalled the work of the Ministry’s Directorate-General for Special Education and Guidance Services and said that millions had been reached. .

Stressing that students have resisted going to school after a break of 1.5 years, Özer said: “I am the father of three children, especially my son in high school has difficulty go to school every day in the morning.process at home in digital environments for 1.5 years, it’s time to start face-to-face education.Of course it creates a shock effect.This is a situation that requires a period of habit, both for our teachers and for our students. We will no longer talk about these things in the coming months. ” made his assessment.

In response to a question about makeup training, Özer stated that they will implement serious support packages for past learning losses through different mechanisms after November.

“We will always continue the process by being with our teachers”

Mahmut Özer, “How do you evaluate the district governor’s argument with Professor Artvin?” On the question, he said:

“There is nothing to say, I can not find words. Unfortunately I condemn that our teachers, who sacrifice so much, especially during the process Kovid-19, one of our teachers, have been subjected to this treatment. Our Ministry of the Interior “The process has already begun, they are doing the necessary research. We will continue the process by always being by the side of our teachers so that things do not happen again.”

Providing information on teacher appointments, Özer said, “We will train 15,000 new teachers for the second quarter.”