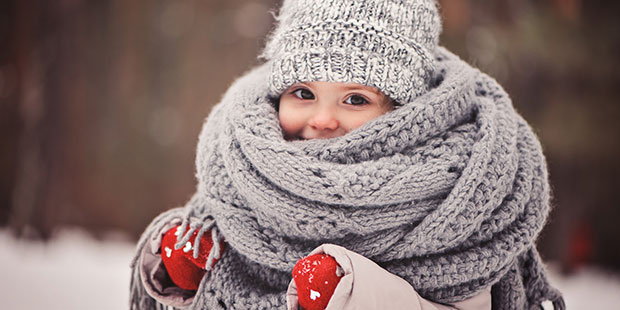 The meteorological general directorate of the cold air from the Black Sea, the air temperature dropped by 6-12 degrees, the seasonal normals announced that after the introduction of measures to reduce the cold intensified.

Viruses that cause colds, which can be seen in children at an average of 6-8 years in adults and 2-3 times in adults, are spread by direct contact of the person or inhalation of droplets that are hanging in the air.

Keep the kids away from the crowd

A common cold is an increase in temperature, but not because it's cold, but most of the time is spent in a crowded environment and transmits viruses to each other. Children do not take colds or colds, unless they are infected with a virus. Therefore, even if children are dressed in extremely thick clothes, it will inevitably catch the cold as they catch the virus. Therefore, it should be known that thick clothing does not represent a shield for the common cold in children.

It is recommended coughing, kicking and complaints in high temperature, as much as possible in the children's space, rather than taking a vehicle for public transport, coughing or taking the necessary measures for home-cooking and resting. In particular, closed areas in which children are often ventilated should be ventilated, and those who have to get out of the cold and flu should walk with a medical mask or try to prevent the spread of the virus by closing the mouth and nose.

Door handles, lift buttons, stair rails, ATM buttons and shopping baskets at workplaces play a very important role in transmitting the virus among people. Because of this, children touching these places should not put their hands on their mouths, nose and eyes, children should be careful of hand washing with soap, kneading and throwing wipes used during cleaning of the carriers in the waste bins, and children should learn to put on the elbow Left hand if there is no tissue.

If there is no complaint, consult your doctor

Common cold applications are expected to disappear gradually within 3-5 days. If the appeal does not fall within 3-5 days, it is necessary to consult an expert. In an environment of weakened viruses, agents call opportunistic infections; oositis media, pharyngitis, rhinfaringitis, sinusitis, inflammation of the lymph nodes in the neck, tonsils, lower respiratory tract disorders, bronchitis, pneumonia, asthma exacerbation, nephritis and rheumatic diseases can lead to major health problems.

Choose a healthy diet and sleep instead of antibiotics

A common cold is a viral infectious disease. Therefore, antibiotics are not effective in treating a cold. The severity of the infection depends on the agent, the age of the child, allergies and the status of the diet. Accordingly, the same factor can produce different clinical pictures of family members. Complications are more common in children with impaired nutrition due to the close relationship between the immune system and the diet. In addition to regular and healthy nutrition, the immune system cells that fight infection will be provided with the necessary support of the immune system of exercise, rest, sleep and morale.