Critical meeting with the EU by Minister Çavuşoğlu 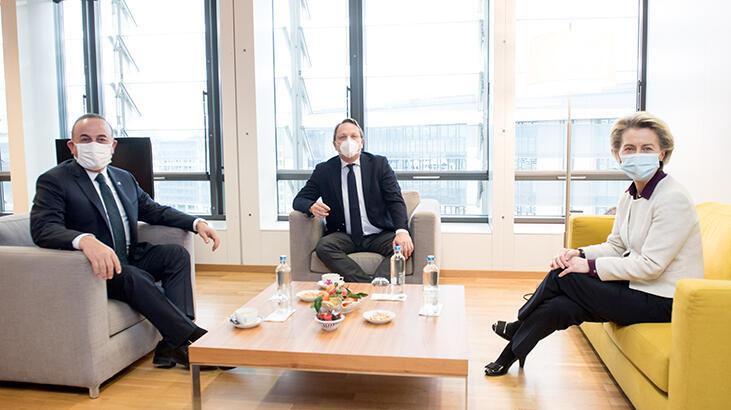 After holding talks in Brussels, Çavuşoğlu moved to the EU Commission after meeting with Josep Borrell, EU High Representative for Foreign Affairs and Security Policy.

These meetings were closed to the press.

“We want to open a new page”

Çavuşoğlu told his social media about his meeting with Borrell: “We want to open a new page with the EU. We need to update the agreement of March 18, 2016 with all its elements. We should work together to achieve an agenda We discussed the preparations for the visit of the President of the Commission and the Council of the EU “. used the expression.

Çavuşoğlu shared another post on social media after their meetings.

The Minister of Foreign Affairs, Mevlut Cavusoglu, process of revitalization of accession to the European Union (EU) of Turkey, update of the Customs Union with the EU, start of visa liberalization and cooperation on various issues that were reported of realization.

“We need to stimulate our participation process.” Çavuşoğlu made the following statement:

“We need to update the customs union and implement visa liberalization. We need to increase cooperation in the fight against illegal immigration and terrorism. We need to fight the growing racism, discrimination and anti-Islamism in Europe.” .

Schinas said they held a constructive conversation about future opportunities and challenges: “Migration, security, people-to-people contacts and Erasmus cooperation have been renewed at the center of the Turkey-EU agenda. It’s time to take positive steps “. made his assessment.

European Union (EU) Commission President Ursula von der Leyen said they discussed the next steps in relations after meeting today with Foreign Minister Mevlüt Çavuşoğlu and that the dialogue it is essential.

Von der Leyen made an assessment on social media after his meeting with Çavuşoğlu in Brussels.

stating that they are exchanging Cavusoglu’s relations between Turkey and the EU on von der Leyen’s next steps, “dialogue must expect credible behavior but also on the ground.” used the expression.

EU leaders Von der Leyen at a summit in December last year in member countries to appoint the Commission on relations with Turkey were approved to work.

“I hope we open a new page”

On the other hand, Oliver Varhelyi, a member of the EU Commission responsible for neighborhood policy and enlargement, with whom Çavuşoğlu met today, said they had a good meeting.

“I hope we open a new page in our relations and cooperate in a constructive and mutually beneficial way for our strategic interests,” Varhelyi said in his message on social media. used the expression.

Ylva Johansson, a member of the EU Commission responsible for internal affairs, said they held an open meeting with Çavuşoğlu on security and migration issues.

Çavuşoğlu is expected to meet tomorrow with EU Council President Charles Michel and NATO Secretary-General Jens Stoltenberg as part of his contacts in Brussels.

The European Union (EU) Foreign Minister Mevlut Cavusoglu with EU Security and Foreign Policy for talks between High Representative Josep Borrell, “the EU, based on values ​​and principles with Turkey, including cooperation and mutual benefit interests in the development of relations “. we find the evaluation.

Borrell said in a statement from the office of the meeting held in Brussels that the state of Turkey-EU relations was expressed that the opportunity was given to assess the rank, in the framework of the summit of the EU leaders.

In a statement, EU leaders, the political deadlock between the December summit in Borrell and the EU-Turkey Commission and economic and trade report reports, also recalled that they wanted to prepare options. on how to proceed in the relationship as follows:

“The EU, because of the values ​​and principles that Turkey has strategic interests in the development of relations, including cooperation and mutual benefits. Josep Borrell and kindly advance Mevlut meetings between Cavusoglu in this direction has allowed a clear exchange of views and deep.