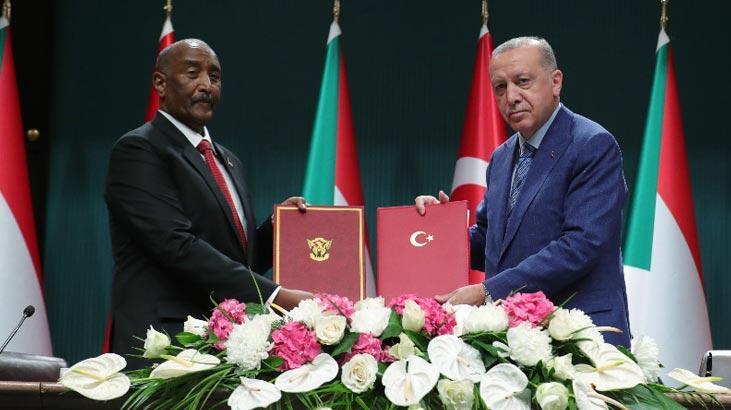 Erdogan held a joint press conference with Sudanese Sovereign Council President General Abdulfettah al-Burhan at the presidential complex. Expressing that he was very pleased with Burhan’s historic visit, which was a first at the president’s level in Sudan’s transition period, Erdogan conveyed his wishes of “welcome” to Burhan and his delegation.

Expressing that he believes the historic visit heralds a new era in the Sudan-Turkey brotherhood, Erdoğan congratulated all Sudanese on New Year’s Eve Hijri and on August 14 Sudanese Armed Forces Day in the person of Burhan .

Stressing that Sudan is a sister country with historical ties between man and culture, Erdoğan continued his words as follows:

“Even when it was unjustly sanctioned, we were in Sudan with all our means. I visited Sudan twice, in 2006 when I was prime minister and in 2017 during my presidency. These visits were also from Turkey to Sudan in the Prime Minister and the President. ”During my two visits, the state and people of Sudan showed great kindness and hospitality to me, my family and my delegation. We have witnessed many times the deep affection of the Sudanese people for our nation. “

Erdoğan recalled that during his visit to Sudan in 2017, they institutionalized cooperation by raising the level of strategic partnership.

Claiming that they discussed relations in detail from this perspective in their meetings today, Erdoğan stated that since 2019 there has been a broad and important process of change in Sudan.

Expressing that Burhan was taking on a difficult responsibility at a critical time, Erdoğan said:

“We are determined to facilitate the grueling process by standing by our Sudanese brother and the state and continuing it in solidarity with the future.” We are pleased to follow the successes you have achieved in the recent period. We believe that Sudan, which has experienced serious difficulties for many years, will achieve the position it deserves in unity and solidarity. The Sudanese people have the strength, insight and spirit of solidarity to overcome the difficulties they face. “

Erdogan expressed satisfaction with the settlement of overdue debts with the World Bank, the African Development Bank and the International Monetary Fund and the reintegration of Sudanese banks into international banking systems.

“We made important decisions”

Erdoğan noted that they will continue the momentum they have gained in recent months in bilateral relations and high-level contacts with Sudan.

“In fact, today we have signed important decisions in this regard. We have agreed to revive the activities of our inter-ministerial commissions and the joint economic commission within the framework of the High-Level Strategic Collaboration Council. Especially in the field of energy. , mining and agriculture., health, finance, banking, defense industry and all other fields.We have confirmed our determination to move forward in our cooperation.We will continue to increase our support for the development and development of Sudan’s infrastructure. The Ali Dinar Palace in Darfur, in the masterpiece Masjid al-Kabir in Khartoum, in Suakin, the pearl of the Red Sea, can be seen in. TIKA meticulously restores these works, especially the Şafi Mosque, the Hanefi Mosque and customs. on Suakin Island. “

Erdogan stressed that at today’s meeting, he and Burhan exchanged views on regional and bilateral issues.

Stressing that they have developed relations with countries in the Horn of Africa region, including Sudan, in recent years, President Erdoğan said: “We have shared our concerns with Burhan about the recent tension between two sister countries and neighboring countries, Sudan and Ethiopia. I noted “the importance of resolving this issue through dialogue and mutual agreement.” Turkey will continue to support Sudan in the coming period. “Turkey-Sudan is consolidating and continuing its path. I hope that our meetings will be beneficial for our countries. I want to thank my dear brother Burhan and his delegation for this historic visit.” dit.

General Abdulfettah al-Burhan, chairman of Sudan’s Sovereignty Council, said Turkey is always on Sudan’s side. Burhan, who is on an official visit to Turkey, and President Recep Tayyip Erdoğan held a joint press conference at the Presidential Complex.

In his speech here, Burhan thanked President Erdogan for his kind invitation on his behalf and on behalf of the Sudanese government and people.

Affirming that there are deeply rooted historical relations between the two countries, Burhan said, “Our duty is to go further by preserving them.” dit.

Burhan expressed his condolences for those who lost their lives due to fires and floods in various regions of Turkey, “The Republic of Turkey is a great state. It is a leading country both in its region and in the world.” used the phrase.

Affirming that they see genuine hospitality today, Burhan said that with its historical traditions, Turkey welcomes it in a way that suits it.

Burhan said: “Turkey has always been on the side of Sudan. Especially in the process of transformation and change that Sudan is going through, Turkey has also been on our side. I hope to overcome this process with the support of our sincere friends like Turkey and the leader. of Turkey “. He said.

Expressing that Turkey supports Sudan in the fight against the new type of coronavirus epidemic (Kovid-19), Burhan stated that the country also welcomes and trains Sudanese students in the field of education.

Stressing that Turkey is the “voice of Sudan” for the removal of all kinds of blockades and sanctions against Sudan, Burhan said: “Especially President Recep Tayyip Erdoğan sided with us with the slogans of a” strong president “as Sudanese have expressed. Sudanese, Sudanese People, youth and all segments will never forget it.” dit.

Burhan said that with the December revolution, they acted with a desire to realize the successes and transformations that Turkey has achieved and noted that they continue their struggle to reach a country where all Sudanese enjoy peace. and stability, as they did in Turkey. .

Burhan said he made this visit to further strengthen the areas of cooperation between the two countries and to take advantage of existing ties.

Claiming that they signed a series of agreements, protocols and memoranda of understanding before the press conference, Burhan stated that these will not remain in the signing phase and that they will see the results put into practice with real cooperation.

“There is no doubt that both Turkey and Sudan can contribute a lot to their people and the region by joining hands.” said Burhan, wishing Turkey more progress and progress in all directions.

Burhan added that he would like to see President Erdogan in Sudan.

President Recep Tayyip Erdoğan spoke for a while on the balcony of the presidential complex with the President of the Sudanese Sovereignty Council, General Abdulfettah al-Burhan, who is paying an official visit to Turkey.