ADNOC and Mubadala signed an agreement on joint investment opportunities 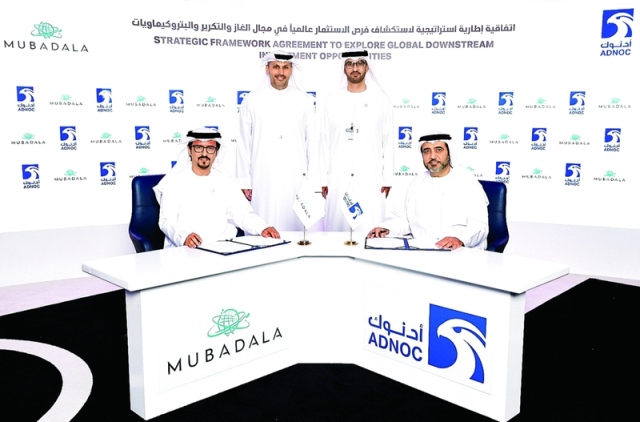 The agreement was signed by Abdulaziz al-Hajri, Director of Gas, Refining and Petrochemicals at ADNOC and Musbah Al-Qa'abi, Executive Director of the Oil and Petroleum Products Department of Mubadala, during the Abu Dhabi International Petroleum Exhibition and Conference (ADIPEC) takes place in Abu Dhabi.

"Mubadala has a diversified portfolio of international companies that are successful in refining and petrochemicals," said Musabah Al-Qabi, executive director of Mubadala Petroleum and Petrochemicals.

They have a strong partnership with ADNOC. Since two companies are owned by the same entity, the government of Abu Dhabi, it is natural to expand our global cooperation and partnership, using the technology we have, our market knowledge, our ability to access raw materials and our operational expertise. "

"This agreement is the natural development of a close relationship between ADNOC and Mubadale," said Abdul Aziz Al Hajri, Director of Gas, Processing and Petrochemicals at ADNOC. Our continued commitment to improving the value of Abu Dhabi hydrocarbon resources is in line with our guiding principles to maximize the value of each barrel we produce. "We look forward to identifying and investing in opportunities that offer mutual benefits and ensure that our products are better on world markets."

Under the agreement, the two sides will consider the possibility of processing crude oil and other hydrocarbons produced by ADNOC, as well as the ability to use the techniques of Mubadale subsidiaries in addressing other ADNOC products. Thus, this comprehensive model of investment will increase the UAE's ability to provide long-term security of its hydrocarbon resources.

ADNOC and Mubadala have a record of successful partnerships, and these partnerships are aimed at maximizing the value of Abu Dhabi oil and gas. Borealis, in which Mubadala owns 67% of its stake, holds 40% of Bruges, a joint venture with ADNOC.

In February 2018, ADNOC signed an agreement by which Mubadalina's subsidiary, Cepsa, acquired a 20% stake in the marine concession Sarab and Um Lulu, after which an agreement was reached with OMV in April, the Oil and Gas Company the continent in the seat of Austria, partially owned by Mubadala, acquired 20% of the shares in the same concession.

ADNOC has launched its new growth and expansion strategy in the field of refining and petrochemicals through the announcement of investments worth 165 billion dirhams ($ 45 billion), including the modernization of the Ruvais industrial industrial complex and increasing its flexibility and integrated capacity to produce large quantities of high-quality petrochemical and refined products, In addition to spreading the company globally through ADNOC International.