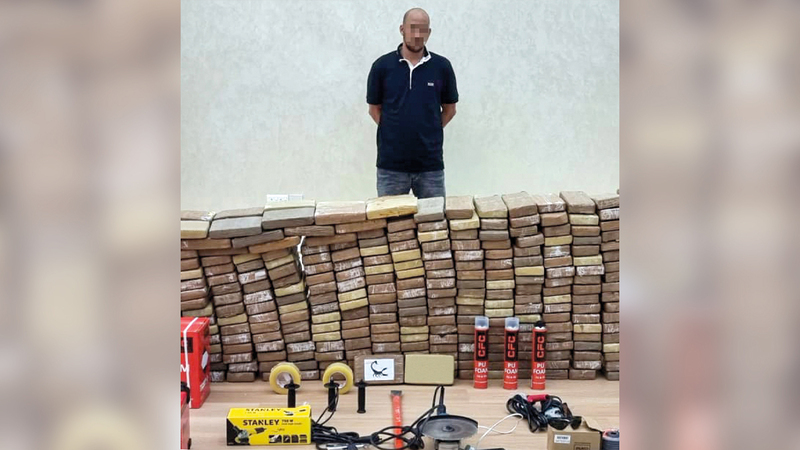 Dubai police revealed details of a raid on a suspect who hid 500 kilos of cocaine in a container, valued at more than 500 million dirhams, with the intention of trafficking and promoting it after receiving ‘ l, and his arrest in a qualitative operation called “Scorpio”, which is considered the largest drug case in the region.

Dubai Police Commander-in-Chief Lieutenant General Abdullah Khalifa Al Marri said the operation (scorpion) consolidates the willingness of the Dubai Police General Command to translate the country’s approach to constructive cooperation with the world’s police agencies, the umbrella of the Interior Ministry, and tackling crime everywhere and contributing strongly to the state aims to make the world a place where everyone is safe from cross-border crime. “

Assistant Commander-in-Chief for Criminal Investigation Matters, senior general expert Khalil Ibrahim Al Mansouri, confirmed that detaining the accused, thwarting his operation and preventing him from succeeding, is a new success in addition to the Dubai police achievements in fighting and reducing crime, and evidence of the advanced work system enjoyed by Dubai police in terms of techniques. Artificial intelligence and qualified and specialized human resources with the competence and professionalism to detect and deal with crimes of all kinds.

For his part, the director of the general department of narcotics control, Brigadier General Eid Muhammad Thani Hareb, said that “as soon as he received the information, a specialized working team was formed for this operation and who began to supervise the accused until a shipment of drugs was sent to him to be subsequently transferred to one of the emirates of the country and stored in the warehouse. “

The Deputy Director of the General Department of Narcotics Control, Colonel Khalid bin Moaiza, explained that “the control process of the accused showed that he rented a four-wheel drive vehicle and acquired cutting tools to use -those in the process of unloading the drug for the purposes of trafficking and promotion, taking precaution when moving from one place to another to ensure that it is not monitored. By setting the zero time, the police attacked the defendant’s place and seized him with drugs, “stressing that the defendant admitted that he had drugs and that he had a history in his country and that he was referred to the prosecution. to complete the legal formalities.