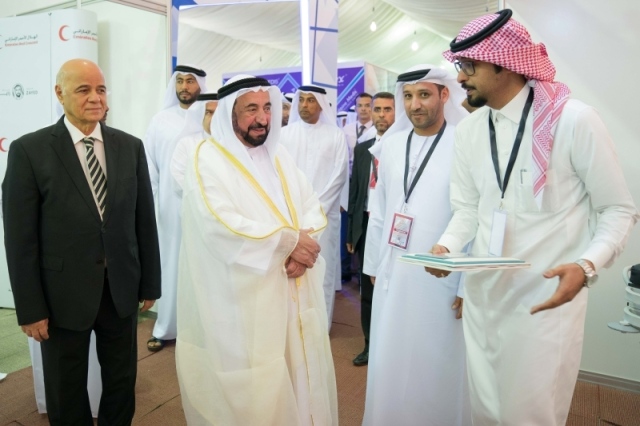 His Majesty Sheikh dr. Sultan bin Mohammed Al Kassimi, a member of the Supreme Council and Sharjah ruler, President of the University of Sharjah, opened yesterday the second international conference on pharmacy and medicine and the 6th United Nations Medical Conference on Germany, which will be held from 18 to 21 November at the College Medical Center, University of Sharjah, with 130 participants, 50 researchers and lecturers from 30 countries.

Al-Nuaimi said that the University of Sharjah has achieved a number of scientific achievements within the directives of His Majesty the ruler of Sharjah to enhance his position in global prospects, including winning the World Bank's Islamic Research Award. The project is funded by the World Islamic Development Bank (VIBC) worth $ 1.2 million. The research is focused on discovering new and unique drugs worldwide to fight and fight against known antimicrobial bacteria and that is.

Al-Nuaimi emphasized that a group of drug discovery and design at the Institute of Medical Research at the University of Sharjah received 33% of the scientific research funded by the Al-Jalil Foundation for researchers at universities in the United Arab Emirates to finance 6 scientific research of great significance foreign scholars and specialists at the University of Sharjah AED.

Dr. Kutaiba Hamid, deputy director of the University of Sharjah for Medical Faculties and Health Sciences, Dean of the Medical School, pointed out that the Second International Conference on Pharmacy and Medicine and the 6th German-American Medical Conference highlights the latest achievements in modern medicine in clinical medicine, medical research, and related science.

His Majesty, ruler of Sharjah, greeted the participants in the success of two conferences, and His Majesty received the memorial shield presented by prof. Nicola Abu Tara, an adviser to the Ministry of Health, a Hamburg hospital in Germany.