Nervous War: How the US eliminates competitors from the oil market. Photo | the business 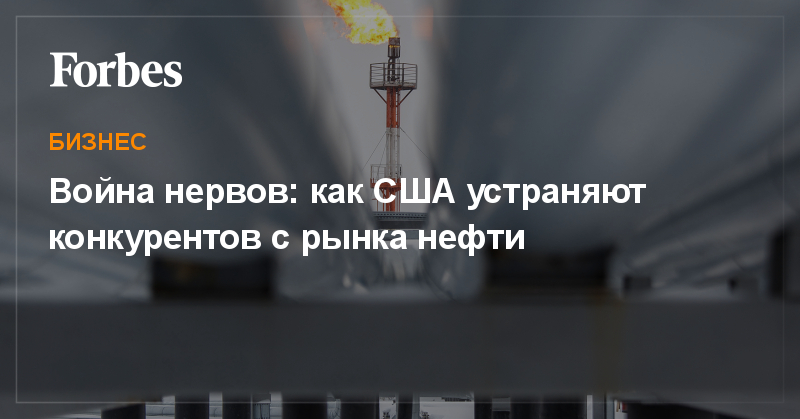 In the US oil industry, known horizontal drilling and hydraulic fracturing techniques, previously used by American companies to improve the flow of developed wells, incl. in Russia in the 1990s, which led to shale revolutions, first in the area of ​​gas production, and then oil. As a result, after three years, the United States increased its oil production by one and a half times (to 9.4 million barrels per day) in 2015, to a value comparable to the value of Saudi Arabia and Russia, which in fact served as a challenge to the leading oil producing countries. Currently, the US produces more than 11 million barrels per day, which is one third of OPEC's overall production.

At the time, the largest oil producer, Saudi Arabia, decided to confirm the status of a key market participant and protect its market share. The essence of the defensive strategy was to use surplus oil production to significantly increase production and create a surplus on the market to lower global billing prices in order to avoid US manufacturers, which are inferior to the costs for manufacturers in the Middle East, and also to a large extent in charge.

However, as a result of a short, but intense "war of nerves", the goal did not justify the means and was not achieved: US producers remained on the market, and low prices were critical to the income of the exporting countries themselves. So, to balance the budget of the same Saudi Arabia, the price of oil is $ 80 to $ 85 per barrel. At the same time, slate manufacturers used (relatively) low interest rates and great flexibility of the US financial market, which offered many opportunities to balance restructuring and risk hedging risks, which enabled them to survive the attack by traditional players.

As a result, OPEC surrendered: at the end of 2016, an agreement was reached between OPEC and countries outside the organization (OPEC +) to reduce oil production by 1.8 million barrels per day. This has allowed the market to stabilize and restore global prices.

The pendulum almost immediately flipped in the opposite direction: the OPEC + step opened the way to the United States to increase its share in the global oil market, and by the end of 2017, the country was already the third largest producer in the world. High oil prices made it possible for American producers to look back to the future and start a new round of investment in production and infrastructure.

According to forecasts (which are often too cautious), US production in 2019 could grow more than 12 million barrels per day, which will allow the state to become one of the world's leaders in terms of production, and the traffic infrastructure ordered at high rates will increase export of raw materials. This will partly contribute to the reduction of supplies from Iran, which is why the United States has restored sanctions on November 5, 2018, which prohibit the purchase of oil from this country.

However, in anticipation of the introduction of these restrictions on the market, perhaps excessive expectations for the lack of oil supply were formed. This led to a speculative price increase in the third quarter of this year. Keep in mind that the high prices of petroleum and petroleum products were non-profit for the United States before the election for Congress. As a result, the United States made an exception for the eight largest Iranian oil consumers – China, India, South Korea, Japan, Italy, Greece, Taiwan and Turkey. These countries can now safely buy oil from Iran 180 days from the date of the introduction of the restrictions. As a result, the justification for the premium price, which was previously largely due to the reduction of supplies from Iran, almost completely disappeared.

In 2017, eight countries accounted for 84% of the Iranian export structure. Key consumers were China and India, which accounted for half of Iranian oil exports. A possible ban on exports, and before introducing exceptions, in many aspects simply consolidating the status of the house, would barely touch at least India and China. The EU also declared a disagreement with sanctions. Now, with the exception, according to some estimates, exports from Iran can actually be maintained at a level of at least 95% above the average. At least in the next six months, Iran will continue to supply one way or another, creating conditions for the creation of surplus in the market and the growth of commercial reserves of oil and petroleum products worldwide.

OPEC + can prevent further stock growth and maintain price stability, but it requires a decision to reduce production in 2019 by at least a million barrels per day. This will help maintain the market balance next year and the level of production growth in the United States. If such a decision is made in the first half of 2019, there may be a deficiency in the oil market, which will be taken into account in prices at the end of this year. The premium for this scenario amounts to about $ 10, which is why prices can be returned above $ 70 / bbl at the end of the current year, provided that demand for risk remains in global markets. However, in order to be able, next year, we can expect a reduction in the average annual price to $ 63 per barrel, including the increased competition from the United States, which are actively increasing exports to the world market. And this is at best …

Following an eight-month result in 2018, oil exports from the United States increased almost 2 times to 1.8 million barrels per day, while half of the deliveries also fell in eight countries experiencing indulgences in the case of Iran. On the market in South Korea, the United States has now completely replaced Iran.

As a result, the US is pushing its competitors out of the market and sanctions can serve as a powerful tool for this, and the exception made after the introduction of restrictions on Iran has confirmed this rule.

It should also be understood that, in addition to the demand / supply situation, the oil market has the most significant impact on developments in financial markets, which have recently become alarming for a long line of assets. Growth in US bonds gives more than 3% compared to the extremely low unemployment rate in the United States and some other macroeconomic indicators indicate that the market predicts overheating in the near future and related Fed actions. This has already led to a sharp fall in the index on the stock market and, at the very least, the rapid rise in oil prices has worsened. Although, frankly, the question is: what caused the trigger for the fall of oil on a larger scale – the Iranian factor and disorientation of OPEC, or events in the market for "paper oil" directly related to the financial. It seems that both factors are important, each – on time. However, sometimes this time "KS" is the same for both.