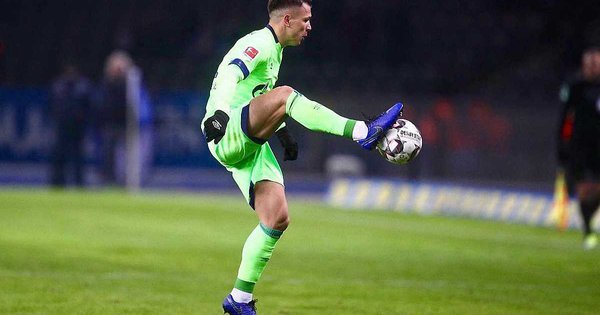 Eugene Konoplyanka increases the possibilities of staying in Germany. Schalke not only fails to win over Gerta in Berlin, but also in the long term several players from the main squad.

The day before the game in the Bundesliga yesterday against Gerta Konoplyanka scored a pretty goal, but his team did not manage to keep the win. On the other hand, nursing the residents of Gelsenkirhen, which was no longer good with the emptiness, expanded considerably. Alessandro Schopf suffered more. According to the official website of Schalke, the 24-year-old Austrian wagon, which can play on both sides of the midfield, was outside for up to 3 months. Schopf sent a lateral lateral ligament after the terrible lack of Karim Rekik, who beat his straight leg to his opponent.

Forward, Stephen Szybyski was out of action for 2 weeks, injuring his thigh muscle. Deputy Chief Benjamin of Istanbul got a broken cheekbone. French will have to operate and wear a protective mask, which means that the midfielder / opornik of 28 years flew by the end of February. At the same time, Schopf and Szczybski are Ukrainian competitors for a place in the starting line, as they can close positions on the left flank and on the attack, where Eugene plays Schalke.

Recall that in Schalke's nursing, 4 players of the attack line had previously appeared, with which Linnet fought for a place at the base: Guido Burgstaller, Brel Embolo, Franco di Santo and Amin Harit. It seems unlikely that, in these circumstances, Eugene will leave the Bundesliga in winter, although he is interested in Turkish subsidies, and the current club does not want to sell profitable a player who has a larger salary, but has little practice of play. In addition, 29-year-old Exdnipro now has serious chances of winning a site at the beginning for at least several weeks.

Add that now Domenico Tedesko can count on only 5 players of the attack link (Kono himself, as well as Ut, MacKeni, Wright and Kutuju), of which the last two are very young of # 39. ; youth team. And they are all closer to the center, but left-wing members formally remain, only nominal defender Hamza Mendil left this position, but the experiment was not very successful. There is also Bastian Ochipka, but every time he plays a defender.

The German media suggest that Gelsenkirchen will shake the transfer market urgently (the deadline is Thursday, January 31, so there is still some time), because the attacking staff is really bad. Former Dnipro striker and Milan Nikolu Kalinich (if Morata arrives at Atlético, Knappen will be able to rent a Croatian for 15 million euros) and Juventus Moise Kina (Turints is not willing to leave that the young talin) to Schalke.

Negotiations with the left-hand side of Manchester United U-23 Rabbi Matondo, who scored 9 goals and made 6 assists in the 21st game of the Youth Cup and the England Championship, as well as the Youth League of UEFA, are also in the active phase. Zinchenko Club rejected the first offer for extraterrestrial development of 18 years, the contract ends in the summer of 2020, but the parties have every chance to finally reach their hands on Monday. In the game they were also Bavaria and Borussia M. Gallic talent operates in a similar way to our Kono. Matondo, in whose person Schalke hopes to find his Sancho, can cost more than 10 million euros. The sting of the situation adds that the City will play with the Linnet team in the Champions League playoffs in a month.

The smart goal of Konoplyanka in the video review of the party Herth – Schalke – 2: 2