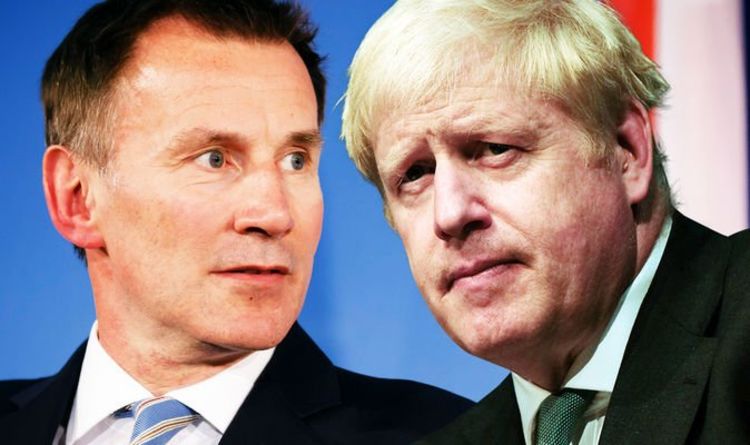 Last night, Boris Johnson and Jeremy Hunt faced a live television audience, debating key issues in their respective campaigns to become the next conservative party leader. The members of the base of the base have received postal votes and will vote to decide which of the two will happen to Theresa May. The winner of the vote by mail will be announced on July 23.

Before the debate, Mr. Johnson told the BBC he had said "some very critical things about Brexit's negotiations so far and that is one of the reasons why I am at night."

He said that he had the opportunity to "do things differently" and "break with the failed, old and powerful approach."

Johnson said: "Now is the time to achieve this problem, stop being so defeated in the approach of the EU negotiations and maybe we will be much more positive about our country and what it can do."

Hunt had been pushing for the debate to take place on an earlier date, the concerned voters had decided before discussing live television.

Hunt seemed confident in the current debate saying: "We began by saying that we are going to turn the coronation into a contest, now we will turn a contest into an annoying situation."

The debate started at 8:00 p.m. BST at ITV1, organized by Julie Etchingham.

But who do you think won the previous night's debate? Rate the express.co.uk survey here.

Hunt repeatedly repeated Mr. Johnson to say if he would resign if he did not deliver Brexit on October 31.

He asked: "Will he resign if he does not release him, yes or no?"

Johnson replied: "My opponent is not clearly committed to leaving the EU on October 31 …

"I think it's very, very important, not to contemplate any circumstances in which we would not leave the EU on October 31.

"I do not want to favor the EU the possibility of favoring my resignation, refusing to agree to an agreement."

Mr Johnson, in a blow to his rival, said that the EU will not take the UK seriously if there is a term of engraving "Breeze."

He said: "If we enter into these negotiations from the beginning with a plan to allow this deadline to be still feasible, because it is a limit of upholstered paper, I am afraid that the EU will not take us seriously.

"Businesses will not understand either that they should prepare to not make any agreement."

According to Coral runner runners, Mr. Johnson is as short as 1-25 to win the Tory leadership race.

Meanwhile, Mr. Hunt has probabilities of 14-1 to become the next prime minister.

Coral spokesman John Hill said: "Boris Johnson is already very likely to win this leadership competition where he would be one of the biggest disorders in the history of political bets if he was not the first prime minister anymore.

"The pointers have been supporting Boris to become the next prime minister since Theresa May moved to number 10 of Downing Street, so they hope he can now pass his last rival."