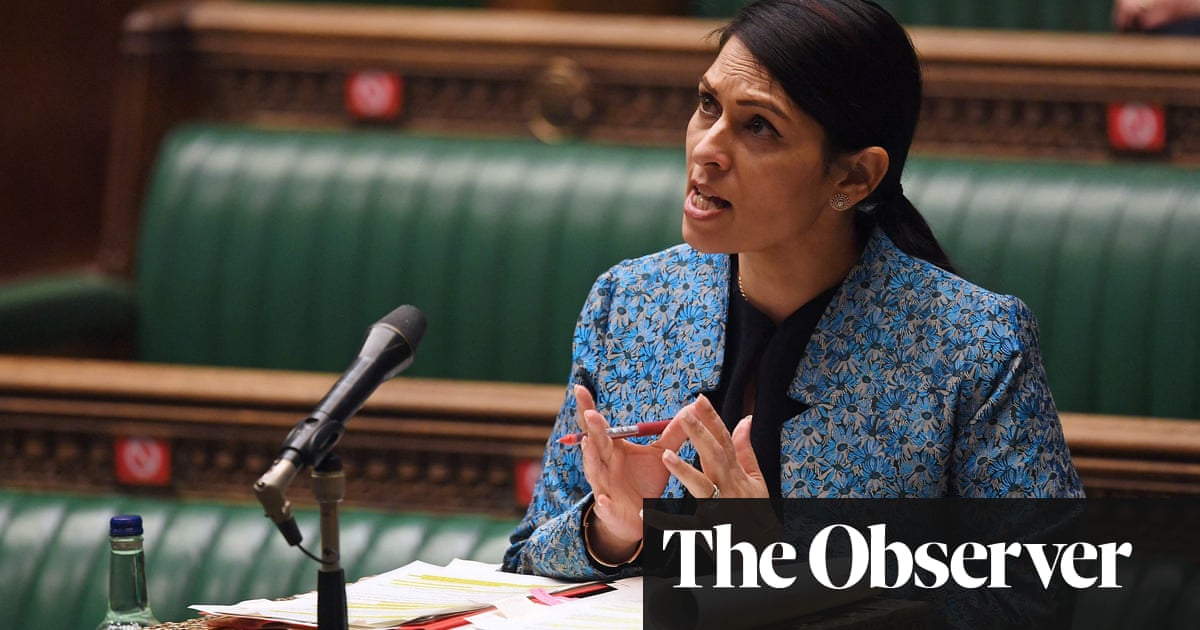 Priti Patel is under new pressure after being accused of appearing to have deceived parliament over the proposed powers to crack down on protests and, separately, to issue a statement on her asylum project that does not appear to be endorsed. for tests.

The two interventions by the Secretary of the Interior served to justify some of the most controversial aspects of her bills on the police and asylum system, which have been criticized for being undemocratic or cruel.

The events come days after Patel was accused by English footballer Tyrone Mings of “lighting the fire” for racists to abuse her teammates after she rejected the knee as a “gesture policy”.

During a March 15 parliamentary debate on the police, criminal, conviction and judicial bill, Patel said he had worked closely with the Police Federation, which represents the interests of 130,000 officers, in drafting the legislative proposal.

“We ask our brave police officers to make the jobs harder … and that’s why I’ve worked closely with the Police Federation to develop this bill,” he told the commons.

However, a response to Freedom of Information (FoI) reveals that it did not consult the federation on the most controversial aspect of the bill (plans to limit the protest) that has sparked protests across the UK.

The federation’s response states: “We did not submit any writ or be consulted on issues of legislation related to the protests.”

Gray Collier, Liberty’s defense director, said: “The Home Secretary’s statement is absurd and leaves serious questions about whether Parliament has been deceived.”

Patel also faces additional questions about attempts to justify his nationality and borders bill, which has been criticized for excessive cruelty to asylum seekers and will reduce support for victims of human trafficking. .

On March 20, the Interior Ministry issued a statement stating an “alarming increase in people abusing our modern slavery system by posing as victims to prevent their withdrawal and allow them to remain. in the country “. The official statement, initially leaked to the Ground, was backed by a quote from Patel that read: “Our generous guarantees for victims are violently violated by child rapists, people who pose a threat to national security and asylum seekers who are not entitled to be here “.

Their comments were used to help drive radical changes to the system for identifying and protecting victims of trafficking.

However, a FoI response to ECPAT UK questions reveals that the Ministry of the Interior’s modern slavery unit could not provide data on child rapists, national security threats or failed asylum seekers referred to. to the modern slavery system since 2017. The answer clarifies that it should drag case files to compile the data, suggesting the lack of existing data for the claims of Patel and the Interior Ministry.

Patricia Durr, chief executive of ECPAT UK, said: “It is shocking to have to rely on an application from FoI to get to the truth behind a policy that will affect more than 10,000 potential victims identified last year alone, most British citizens.

“Many provisions are unnecessary, cruel and clearly unfounded. There are serious questions about the evidence base of the measures of a bill that is a major setback in recent history of traffic survivors.

Sam Grant, head of policy and campaigns for the human rights organization Liberty, which filed FoI’s requests on the police bill along with environmental group Friends of the Earth, said: law has sparked massive protests and almost universal opposition, including police chiefs who say it threatens democracy. The fact that the police forces were not even consulted demonstrates the determination of those in power to quell dissent.

Danny Gross, an advocate for Friends of the Earth, said: “The government did not even consult the police themselves, let alone more widely, about these plans to curb the peaceful protest, which after all is a right. “We have to ask ourselves why this was?”

An Interior Ministry spokesman said any suggestion that Patel had deceived parliament over the police bill was “completely unfounded.” They said: “He referred to working with the Police Federation in discussing measures that will affect its members the most.”

When asked to respond, the federation refused, although the FoI’s response explains that the head of the organization, John Apter, told a parliamentary committee three days after Patel’s complaints to MPs on 15 of March that his organization “had not been consulted” by the bill relating to the repression of the protest.

Regarding the claims on the asylum bill, which has a second reading in the Commons on Monday, the Interior Ministry said: “Our asylum system is broken and open to abuse. This is supported by evidence, including published statistics and analysis by the Interior Ministry. Suggesting otherwise is completely wrong.

“We will not tolerate those, including child rapists, people who pose a threat to national security, failed asylum seekers who are not entitled to be here, or those who try to divert resources from real victims.” .