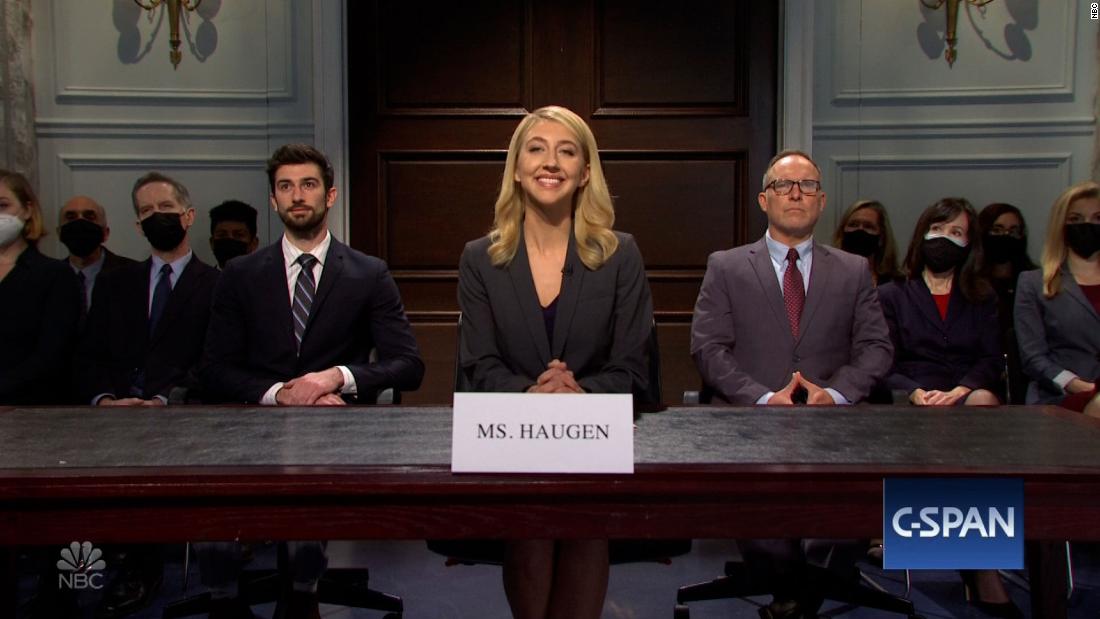 The NBC variety show kicked off Saturday with Frances Haugen, played by Heidi Gardner, who testified on Capitol Hill about Facebook’s internal workings. Unfortunately for Gardner’s Haugen, he quickly became into Congress by asking questions about how social media works.

“I would like to thank the Facebook whistleblower for introducing himself,” Mikey Day Senator Richard Blumenthal said.

Haugen de Gardner responded by saying it was good to be in an office without “skateboards.”

“What Facebook has done is embarrassing and you better believe Congress will take action,” he said. “Right after approving the infrastructure bill, raising the debt ceiling, prosecuting those responsible for the Jan. 6 insurgency and letting Trump use executive privilege, even though he is no longer president. But after all that, beware, Facebook! “

“I think it has about 50 million,” Haugen de Gardner said.

“Oh my God, it’s no wonder he never responded to my game,” Feinstein of Strong replied.

“I was especially drawn to your testimony about online harassment,” Cruz de Bryant said. “Like some teenagers and even some adult men are harassed almost constantly.”

Cruz de Bryant then asked how to turn off the harassment feature and said he was concerned about the toxic groups mentioned by Gardner’s Haugen.

Haugen de Gardner explained to Cruz de Bryant that those groups were not misinformation, but only an opinion of one person.

“Well, it’s the opinion of more than one person,” he said.

The sketch ended with two of the social media leaders joining the interrogations.

“No, no, we don’t need this guy anymore,” Day’s Blumenthal said.

Instead, he went to “OG social media king,” Tom of Myspace, played by Pete Davidson.

“Remember me? I was harmless,” Tom de Davidson said. “I’m not doing anything with this weird algorithm. We barely maintain the website.”

Then he said, “Come on, take a look at your friend’s band from 20 years ago” and “let’s make the United States the top eight again.”